The international community must answer a “grave” breach of international law with “more than mere criticism”, an independent UN expert said on Friday after the Israeli Government announced its approval of nearly 5,000 new settlement homes in occupied Palestinian territory. 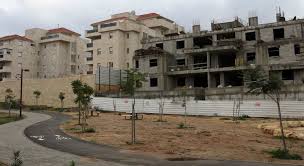 Construction in the Israeli settlement of Ariel in the West Bank. (file)
IRIN/Annie Slemrod

30 Oct 2020 – Michael Lynk, UN Special Rapporteur for the situation of human rights in the Palestinian Territory occupied since 1967, pointed out that while “Israeli settlements continue to devour the land that is meant for the independent Palestinian State, the international community observes, it sometimes objects, but it does not act”.

Against the backdrop that earlier this month, a defense ministry planning committee approved plans for 4,948 more homes, he spelled out: “It is high time for accountability”.

The latest announcement means that the Israeli government has approved more than 12,150 settlements this year, said the independent UN expert.

According to the advocacy group Peace Now, this would be the highest number of annual approvals by Israel since the group began recording figures in 2012.

“While Israel may have shelved its plans for the de jure annexation of the settlements in August, it is continuing with its de facto annexation of the Palestinian territory through this unrelenting settlement growth”, discerned Mr. Lynk, who was appointed as a Special Rapporteur by the UN Human Rights Council in 2016.

“Both are clear violations of the Charter of the United Nations and the 1998 Rome Statute on the International Criminal Court” and he warned that the acceleration of settlement growth “worsens an already precarious human rights situation on the ground”.

Since 1979, the Security Council has said on at least six occasions that the Israeli settlements are a “flagrant violation under international law” and have “no legal validity”, according to the Office of the High Commissioner for Human Rights (OHCHR).

Despite Resolution 2334 of 2016, whereby the 15-member organ demanded that Israel “immediately and completely cease all settlement activities”, since 2017 the UN Special Coordinator for the Middle East Peace Process has reported to the Council 14 times that no compliance steps had been taken.

The UN expert also expressed deep concern that three days ago the United States amended its existing agreements with Israel to allow joint funding for projects in illegal Israeli settlements. Previously, this was only permitted to projects within Israel’s internationally recognized pre-1967 borders.

Mr. Lynk stressed that changes to bilateral agreements between the US and Israel “fly in the face of Resolution 2334, which calls upon all Member States to recognize the illegality of the settlements, and to distinguish, in their relevant dealings, between the territory of the State of Israel and the territories occupied since 1967”.

Moreover, he underscored the importance of  the international rule of law, saying “if we are to avoid the rule of the jungle, it must be obeyed”.

“If the rule of law matters, then so must accountability”, Mr. Lynk said pointedly. “If the Security Council is to speak with authority, then the disobedience of Council directions must have consequences”.

The disobedience of Council directions must have consequences

Accountability on the agenda

Meanwhile, new settlement approvals are accelerating as Israel’s demolition of Palestinian homes and properties is increasing, according to the UN expert.

The demolitions not only violate international humanitarian law but also “contribute to the coercive atmosphere in the Occupied Palestinian Territory”, Mr. Lynk explained, upholding that “accountability must be on the agenda”.

The Special Rapporteur advocated for the prohibition of settlement products in the international marketplace and maintained that “agreements, existing and proposed, with Israel, should be reviewed” and the UN Database and current investigations at the International Criminal Court “be supported”.

Special Rapporteurs are appointed by the Geneva-based UN Human Rights Council to examine and report back on a specific human rights theme or a country situation. The positions are honorary and the experts are not UN staff, nor are they paid for their work.