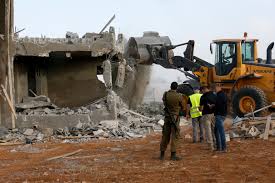 Eighteen tents that housed 11 families in the northern village of Khirbet Humsa were razed late on Tuesday.

A total of 74 people were displaced, more than half of which were minors, according to B’Tselem, an Israeli anti-occupation non-government organisation.

The bulldozers and diggers also demolished sheds used as livestock enclosures, portable toilets, water containers and solar panels, on top of confiscating vehicles and tractors belonging to some of the residents. 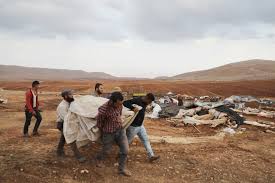 Palestinians gather their belongings after Israeli soldiers demolished their tents in an area east of the village of Tubas, in the occupied West Bank.
[Jaafar Ashtiyeh/AFP]

Palestinian Prime Minister Mohammed Shtayyeh called on the international community to intervene against Israeli troops’ attempt to “displace the citizens of Khirbet Humsa and tens of similar communities from their homes and lands”, pointing to the fact that Israel “chose this evening to commit another crime” as the attention is focused on the United States presidential election.

As the attention is focused on #USElection2020, Israel chose this evening to commit another crime/ cover it up: to demolish 70 Palestinian structures, incl. homes, in Khirbet Humsa al-Foqa in the northern Jordan Valley, displacing ~80 Palestinian citizens, incl. women/children.

Abdelghani Awada, left homeless by the operation, told the AFP news agency that the Israelis gave people “10 minutes to evacuate our homes”.

“Then, they started bulldozing,” he said.

He said his family had lived in the area for generations and accused Israel of trying to “empty the Jordan Valley of its Palestinian population”.

The late-night operation was unusual given that so many homes were targeted at the same time, according to B’Tselem.

While you were eagerly following the US elections, Israel has demolished an entire community’s residential compound, leaving 74 people, 41 of them minors, homeless. pic.twitter.com/7hA5AHdFn0

“Clearly, the intention is to force residents off the land by creating a man-made humanitarian disaster. But residents have told us they have nowhere to go,” said on Twitter Sarit Michaeli, international advocacy officer for the B’Tselem, adding that this was the first demolition in seven years of an entire herder community.

The last time Israel demolished an entire herder community was 7 years ago. Clearly, the intention is to force residents off the land by creating a man-made humanitarian disaster. But residents have told us they have nowhere to go. https://t.co/DUm1sLKyZM

The branch of Israel’s army responsible for civilian affairs in the West Bank, COGAT, said it destroyed structures that were “built illegally in a firing zone (military training area) in the Jordan Valley”.

The Jordan Valley is home to approximately 60,000 Palestinians, according to the UN, but nearly 90 percent of the land is part of what is known as Area C, the three-fifths of the West Bank that is under complete Israeli control.

It includes closed military areas and about 50 agricultural settlements housing some 12,000 Israelis.

Palestinians are barred from those areas and from the lands they own. They are forbidden from digging wells or building any kind of infrastructure without hard-to-get military permits. 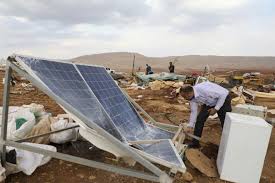 Anything built without a permit, from home extensions to tents, animal pens and irrigation networks, is at risk of demolition by the Israeli military.
[Jaafar Ashtiyeh/AFP]

From 2009 to 2016, less than two percent of more-than-3,300 permit applications in Area C were successful, according to Peace Now, an Israeli anti-settlement group, citing official statistics.Anything built without a permit, from home extensions to tents, animal pens and irrigation networks, is at risk of demolition by the Israeli military.

Almost 800 Palestinians, including 404 minors, have already lost their homes in 2020.