12 Nov 2020 – What follows is my contribution to a forthcoming publication bearing the title Shared Struggle: Stories of Palestinian and Irish Hunger Strikers. This is an important collection of writing prepared by Norma Hashim and Yousef M. Aljami. It appeared by way of exclusive arrangement on October 27, 2020 in the online magazine Politics Today. My essay speaks to the hunger strikes as political resistance of a sublime character, and at the same time to the selective silence of the Western media when it comes to heroic moments in the Palestinian struggle. Just days ago Maher Al-Akhras ended his 103 day hunger strike when Israel finally agreed to his release from prison after repeated confinement without charges under colonialist ‘administrative detention’ rulings. 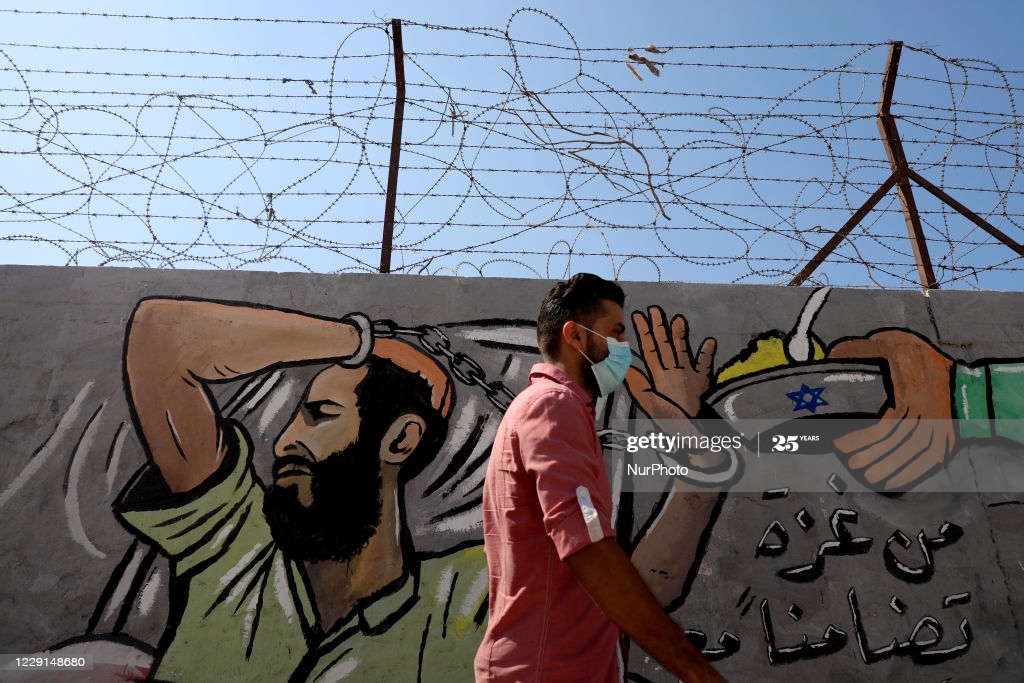 A Palestinian man wearing a protective mask walks past a mural depicting prisoner Maher Al-Akhras, 49, a Palestinian jailed by Israel, who has been on hunger strike for 84 days, protesting his detention without trial, in Gaza City October 18, 2020. (Photo by Majdi Fathi/NurPhoto via Getty Images)

Desperate circumstances give rise to desperate behavior. If by states, extreme violent behavior tends to be rationalized as ‘self-defense,’ ‘military necessity,’ or ‘counterterrorism,’ and claims of legal authorization are treated as appropriate. If even nonviolent acts of resistance by individuals associated with dissident movements, then the established order and its supportive media will routinely describe such acts as ‘terrorism,’ ‘criminality,’ and ‘fanaticism,’ and the behavior is criminalized, or at best exposed to scorn by the established order of sovereign states. Statist forms of combat almost always rely on violence to crush an enemy, while the desperation of resistance sometimes takes the form of inflicting hurt upon the self so as to shame an oppressor to relent or eventually even surrender, not due to empathy or a change of heart, but because fearful of alienating public opinion, intensifying resistance, losing international legitimacy, facing sanctions. It is against such an overall background that we should understand the role of the hunger strike in the wider context of resistance against all forms of oppressive, exploitative, and cruel governance. The long struggles in Northern Ireland and Palestine are among the most poignant instances of such political encounters that gripped the moral imagination of many persons of conscience in the years since the middle of the prior century.

Those jailed activists who have recourse to a hunger strike, either singly or in collaboration, are keenly aware that they are choosing an option of last resort, which exhibits a willingness to sacrifice their body and even life itself for goals deemed more important. These goals usually involve either safeguarding dignity or honor of subjugated people or mobilizing support for a collective struggle on behalf of freedom, rights, and equality. A hunger strike is an ultimate form of non-violence, comparable only to politically motivated acts of self-immolation, physically harmful only to the self, yet possessing in certain circumstances unlimited symbolic potential to change behavior and give rise to massive displays of discontent by a population believed to be successfully suppressed. Such desperate tactics have been integral to the struggles for basic rights and resistance to oppressive conditions in both Palestine and Northern Ireland.

An unacknowledged, yet vital, truth of recent history is that symbolic politics have often eventually controlled the outcomes of prolonged struggles against oppressive state actors that wield dominant control over combat zones and uncontested superiority in relation to weapons and military capabilities. And yet despite these hard power advantages thought decisive in such conflict, they go on in the end to endure political defeat. It may be helpful to remember that it was the self-immolation of Buddhist monks in Saigon during the 1960s was considered a scream of the culture in reaction to the American led military intervention. It led Vietnamese scholars to interpret these extreme acts of solitary individuals, endowed with the highest civilizational authority, as actually shifting the balance of forces in Vietnam in ways that then and there doomed the seemingly irresistible American military resolve to control the political future of Vietnam. These acts didn’t end the war, but to those with insight into Vietnamese culture it did signal an outcome contrary to what the war planners in Washington expected. Tragically before acknowledging defeat, the Vietnam war persisted for a decade, ravaging the land and bringing great suffering to the people of Vietnam. Self-immolation, setting oneself on fire as an irreversible instance of self-sacrifice, carries the logic of a hunger strike to its conclusion. Depending on the actor and context, self-immolation can be interpreted either as an expression of hopeless despair or as a desperate appeal for a just peace.

It was the self-immolation of a simple fruit and vegetable vendor, Mohamed Bouazizi in the Tunisian town of Sidi Bouzid on December 17, 2010 that called attention to the plight of the Tunisian people, igniting a nationwide uprising that drove a corrupt dictator, Ben Ali, from power. Bouazizi, without political motivation or spiritual authority of the Buddhist monks, sparked populist mobilizations that swept across the Arab world in 2011. Somehow Bouazizi’s entire personal self-immolation set the region ablaze. Such a reaction could not have been predicted and was not planned, yet afterwards it was interpreted as somehow generating revolutionary responses to intolerable underlying conditions.

Without doubt, the supreme example of triumphant symbolic politics in modern times was the extraordinary resistance and liberation movement led by Gandhi that merged his individual hunger strikes unto death with spectacular nonviolent forms of collective action (for instance, ‘the salt march’ of 1930), accomplishing what seemed impossible at the time, bringing the British Empire to its knees, and by so doing, restoring independent statehood and sovereignty to India.

Both the oppressed and the oppressors learn from past successes and failures of symbolic politics. The oppressed view it as an ultimate and ennobling approach to resistance and liberation. Oppressors learn that wars are often not decided by who wins on the battlefield but by the side that gains a decisive advantage symbolically in what I have previously called ‘legitimacy wars.’ With this knowledge of their vulnerability, oppressors fight back, defame and use violence to destroy by any means the will of the oppressed to resist, especially if the stakes involve giving up the high moral and legal ground. The Israeli leadership learned, especially, from the collapse of South African apartheid not to take symbolic politics lightly. Israel has been particularly unscrupulous in its responses to symbolic challenges to its abusive apartheid regime of control. Israel, with U.S. support, has mounted a worldwide defamatory pushback against criticism at the UN or from human rights defenders around the world, shamelessly playing ‘the anti-Semitic card’ in its effort to destroy nonviolent solidarity efforts such as the pro-Palestinian BDS Campaign modeled on an initiative that had mobilized worldwide opposition to South African apartheid. Notably, in the South African case, the BDS tactic was questioned for effectiveness and appropriateness, but its organizers and most militant supporters were never defamed, much less criminalized. This recognition of the potency of symbolic politics by Israel has obstructed the Palestinian liberation struggles despite what would seem to be the advantageous realities of the post-colonial setting.

Israel’s version of an apartheid regime evolved as a necessary side effect of establishing an exclusivist Jewish state in a non-Jewish state. This Zionist project required that the Palestinian people become victims of colonialist displacement in their own homeland. Israel learned from the South African experience techniques of racist hierarchy and repression, but they were also aware of the vulnerabilities of oppressors to sustained forms of non-violence that validated the persevering resistance of those oppressed. Israel is determined not to repeat the collapse of South African apartheid, and to do so requires not only repression of resistors but the demoralization of supporters.

A similar reality existed in Northern Ireland where the memories of colonies lost to weaker adversaries slowly taught the UK lessons of accommodation and compromise, which led the leaders in London to shift their focus from counterterrorism to diplomacy, with the dramatic climax of the Good Friday Agreement in 1998. Israel is not the UK, and the Irish are not the Palestinians. Israel shows no willingness to grant the Palestinian people their most basic rights, yet even Israel does not want to be humiliated in ways that can arouse international public opinion to move beyond the rhetoric of censure in the direction of sanctions. The Israeli Prison Service doesn’t want Palestinian hunger strikers to die while in captivity, not because of empathy, but to avoid bad publicity. To prevent such outcomes, Israeli prison authorities will make concessions, including even release, when a hunger striker is feared at the brink of death, and earlier attempts at force feeding have failed. Palestinian prospects are more dependent than ever on waging and winning victories in the domain of symbolic politics, and Israel, with the help of the United States, will go to any length to hide defeat in this longest of legitimacy wars.

It is against such a background that Palestinian and Irish contributions came to surface to underscore the essential similarity of these two epic anti-colonial struggles. What gives the stories of Palestinian and Irish hunger strikers the authority and persuasive power is the authenticity derived from words of those brave men and women who chose to undertake hunger strikes in situations of desperation and experienced not only their own spirit-enhancing ordeal but the pain of loss of martyred fallen comrades, grieving families, and their common effort to engage the wider struggles for rights and freedom being carried on outside the prison walls. Despite the vast differences in their respective struggles against oppression, the similarities of response created the deepest of bonds, especially of the Irish toward the Palestinians whose oppressive reality was more severe, and has proved more enduring, although the dreams of the Irish hunger strikers remain largely unrealized. At the same time, the inspirational example of the Irish hunger strikers who did not abandon their quest for elemental justice at the doorstep of death was not lost on the Palestinians.