Martin Wight was an analyst of approaches to the study and practice of international relations.  He taught at the London School of Economics and later at the then newly created University of Sussex.  He was a conscientious objector to military service during the Second World War, influenced by the Christian Pacifism of Rev. Dick Sheppard and his Peace Pledge Union.  During part of the war years, he was at Chat am House working under the direction of Arnold Toynbee who instilled in Wight a “challenge and response” view of world history and an interest in classical Greek history. 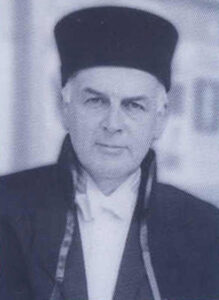 When the United Nations was created, he spent most of the ­1946-1947 year at Lake Success, just outside of New York City where the U.N. was then housed.  He was interested in the ways that States interacted especially in the Security Council and the start of the USA-USSR tensions.  His reporting led to his short 1947 book Power Politics.

In 1957, he was invited to teach international relations at the University of Chicago to replace Hans Morgenthau who had a year of absence.  It was during this academic year that Wight first developed his views on the three approaches (or traditions) of international relations theory: what he termed the Realist, the Rationalist, and the Revolutionist schools. I was his graduate student that year and so benefited from his approach.

The published form of this approach was only made available after his early death at the age of 58. He was basically a teacher and encouraged discussion among his students.  He published little, and his major writings were compiled after his death by former students with the help of his German-born wife.

The realist school was easy to define, especially that in 1957 he was replacing Hans Morgenthau who was the best known international relations writer who used the title for himself.  Wight also knew H.H. Carr in England who could be connected to the realist tradition.  Also in the 1950s the writings of George Kennan, both as a writer and a practitioner, were highly visible.

Wight’s emphasis on schools of international relations approaches helps to remind us that we do not start with a blank page but rather we are part of a long line of thinkers who have tried to deal with the issues of people, doctrines and States within the international society.

Anticopyright: Editorials and articles originated on TMS may be freely reprinted, disseminated, translated and used as background material, provided an acknowledgement and link to the source, TMS: Martin Wight (26 Nov 1913 – 15 Jul 1972): Analyst of International Relations Traditions, is included. Thank you.