27 Nov 2020 – A recent university study found that outbreaks at meatpacking plants were responsible for nearly 8 percent of all COVID-19 cases in the United States during the early months of the pandemic.

Charles Taylor of Columbia University and Christopher Boulos and Douglas Almond of the University of Chicago found a strong statistical correlation between infections in broader communities and their “proximity to livestock plants.” Between 236,000 and 310,000 coronavirus cases through July 21 occurred near a meatpacking plant, comprising 6 percent to 8 percent of infections at the time. Between 4,300 and 5,200 coronavirus deaths were in counties near large meat-processing facilities, representing about 3-4 percent of all US deaths.“The vast majority” of the cases recorded, the researchers conclude, were “likely related to community spread outside these plants.” 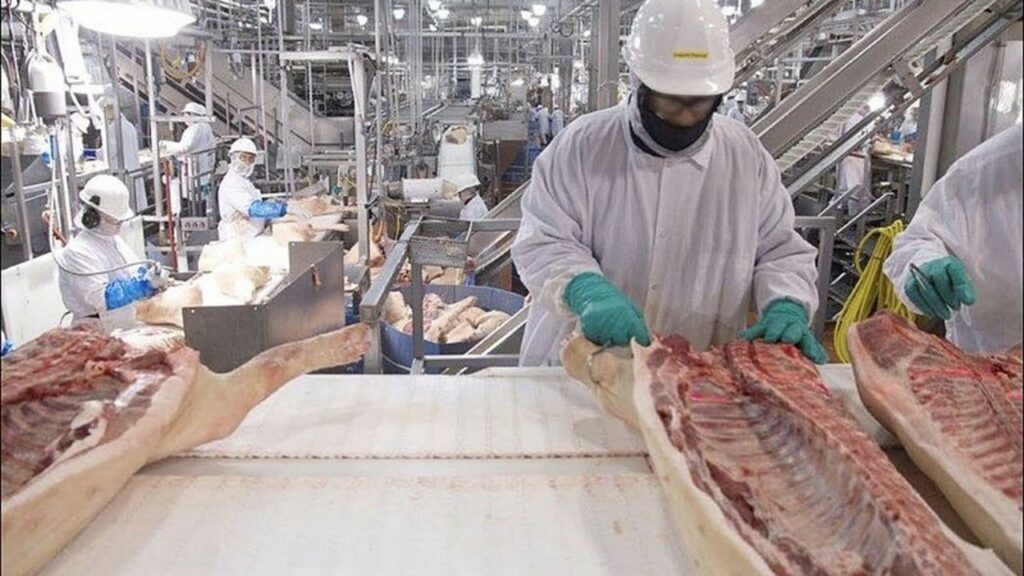 Workers in a Hog Slaughter and Processing Plant. (Wikimedia Commons)

By July 21, when correcting for risk factors including racial and ethnic background, average income, household size, portions of workers in frontline jobs, elderly population and population in prisons and nursing homes, the researchers found residents of counties with meatpacking plants had a 51 percent higher rate of infections and a 37 percent increase in death rates.

Ashley Peterson, Senior Vice President of Scientific and Regulatory Affairs for the National Chicken Council (NCC), attempted to downplay the study by claiming that the “vast majority” of infections and deaths documented in the study were people who did not work at poultry or meat plants, proclaiming that it “highlights the fact that individuals are more likely exposed to COVID-19 due to community spread.”

This, however, is precisely the point: Outbreaks at meatpacking plants themselves have been key drivers of broader community transmission. In data recorded and reported by the Proceedings of the National Academy of Sciences of the United States of America (PNAS), there is “a strong positive relationship between livestock-processing plants and local community transmission of COVID-19, suggesting that these plants may act as transmission vectors into the surrounding population and accelerate the spread of the virus beyond what would be predicted solely by population risk characteristics.”

Sarah Little, a spokeswoman for the North American Meat Institute (NAMI), said meatpackers have invested “more than $1 billion so far in significant changes and improvements regarding COVID-19 prevention.” Little continues with callous disregard for the health of workers and staff, “The authors fail to capture the downward trend of positive cases associated with the meat and poultry industry into the summer and fall, especially in contrast to the positive cases reaching new highs around the nation.”

In reality, at least 253 meatpacking workers have died and more than 49,000 have tested positive, according to the Food and Environment Reporting Network (FERN). Meatpacking executives knowingly endangered not only their own workforce but the surrounding populations by keeping facilities open. One of the most disturbing expressions of this cavalier attitude is the revelation that managers at a Tyson pork plant took bets on how many workers would ultimately become infected. Management, with the support of the United Food and Commercial Workers union, also offered financial incentives to workers for perfect attendance.

The findings of the study are an indictment not only of the major meatpacking companies themselves but the entire political establishment. They have worked together to keep facilities open during major outbreaks. On April 28, President Donald Trump invoked Cold War-era Defense Production Act in an executive order to force meat processing facilities remain open. State regulatory bodies such as the Iowa Occupational Safety and Health Administration have also been caught cooking the numbers to downplay the spread of disease.

More outbreaks are already underway. According to press reports last week at least 20 new cases have occurred at the JBS beef processing plant in Greeley, Colorado. More than 300 infections and six deaths have occurred in the plant, where workers staged a wildcat strike in early July.

Earlier this month, judges in Iowa ruled that Seaboard Triumph Foods, a meatpacking company with 2,400 workers at a plant in Sioux City, must pay unemployment to workers who quit over COVID-19 concerns. According data collected by the New York Times, 176 workers at the plant have been infected, making it the 13th-largest cluster in the state. Workers at the plant are crammed together 3 feet apart, making social distancing impossible, and, according to one worker, management failed to inform her that a worker in her area had died of the virus.

However, while the judge in that case found that “conditions were unsafe, intolerable and detrimental,” the Iowa state government has been running interference for the meatpacking companies. Tyson CEO Noel White reportedly traveled to the state for a closed-door meeting with Iowa Governor Kim Reynolds in the spring, who then issued a directive prohibiting local governments from issuing lockdown orders at odds with the policies of the state government.