20 Nov 2020 – The Center for UN Constitutional Research (CUNCR) based in Brussels is a leading edge think tank challenging the notion that the United Nations Charter cannot be revised or replaced.  The Charter’s flaws are serious.

CUNCR along with Democratic World Federalists (DWF), the World Constitution & Parliament Association – India (WCPA-India), and the Earth Constitution Institute (ECI) have launched THE SAN FRANCISCO PROMISE, a plan to have the UN General Assembly review the defective, obsolete UN Charter.  The goal?  A “new UN” using the Earth Constitution as a guide and model to fix the Charter, or replace it. 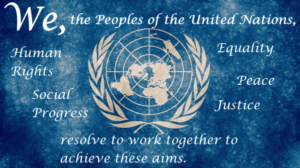 The principle of national sovereignty in the Charter gives any national government the legal right to destroy Mother Earth and perhaps, humanity itself.  This is not an exaggeration.   From climate change to war to nuclear weapons, the UN has been frustrated and unable to get the job done as self-centered governments defy the common good.

We routinely see the effects of climate change with its extreme weather conditions.  We are horrified by the growing nuclear arms race which the UN is trying to stop, but has no means to enforce the new international legal ban against nuclear weapons.  The USA and other nuclear states are brazenly defying the UN’s new legal ban.  The Pentagon is leading a dangerous nuclear arms race which it calls a “modernization” Life Extension Program, but which is better described as a Life Extinction Program.

Professor Glen T. Martin (*Martin, 2020) warns about the sovereignty principle in the UN Charter which allows governments to endanger the Earth and humanity itself, and to do so legally.

Here are EXCERPTS from Dr. Martin’s eye opening critique of the UN with its Sustainable Development Goals obstructed by “sovereignty”.  Martin writes:

“Consider the implications of this dogma of sovereignty. The government of Brazil happens to host “the lungs of the Earth” that produce nearly 50% of the world’s oxygen and moderate the global climate in a variety of ways as explained in detail by climate scientists.  Under this system, the government of Brazil has the legal right to destroy the lungs of the earth through development by its private, profit-making corporations. The United States has the legal right not to sign the Law of the Sea convention and to withdraw from the 2015 Paris Climate Accord, even though that withdrawal by the world’s largest polluter could mean bringing down the global climate for the entire Earth.”  (Martin, 2020)*

Martin makes it clear that the UN system has a fundamental defect:

“Under the UN system, China has the legal right to produce all the CO2 it wants and send this into a global atmosphere that is daily increasing the greenhouse effect of overheating our entire planet.  All the nations of the world have these same rights, including the legal right to militarize themselves to the teeth, wasting resources badly needed to protect and restore our planetary environment. To understand this is to discern how absurd these Sustainable Development Goals and the UN system that supports them really are.”  (Martin, 2020)*

Dr. Martin believes the answer can be found in the Earth Constitution:

“The Constitution for the Federation of Earth (aka Earth Constitution) does not abolish the nations but unites them within the World Parliament that represents the common good of everyone on Earth. The people of Earth are sovereign and the Earth Federation government representing them is designed to address precisely these global problems that the UN system is not designed to effectively address….”  (Martin, 2020)*

Democratic World Federalists, seeking a peaceful, just and prosperous world, has adopted THE SAN FRANCISCO PROMISE as its primary strategy;  it calls for the UN General Assembly to launch a review of the Charter, buttressed by CUNCR’s legal analysis.

[Charter review opens the door to identify what’s wrong with the Charter and what is needed to fix or replace its fatal defects.  Article 109(3), according to CUNCR, provides the legal mandate for the review, a promise made in 1945 but never fulfilled. — Editor]

CUNCR’s young climate ambassadors are spreading the word all the way up to the UN itself that climate change will require more than appealing to nations to cooperate, it will require a change in the UN’s governing system itself.

Peace activists, moreover, understand that forming a world federal union governing structure (“new UN”) is necessary to end wars between the nation-states, but also the only practical way to eliminate the danger of a nuclear nightmare.

The 193 nations making up the UN, like the original 13 colonies of the US, must unite under a federal constitution.  This is the only practical, realistic way to have a safe world to live in.  There is no shortcut.

The World Parliament &  Constitution Association – India (WCPA-India) will reach out for support from nations.  The Earth Constitution Institute (ECI) provides the visionary Earth Constitution as a model and guide for the UN General Assembly to revise or replace the outdated UN Charter.

A “new UN” is therefore possible, one given the tools it will need to actually save the world from the harm allowed by selfish sovereignty.  After all, why should Brazil, or China, or the USA, or any country have the legal sovereign right to endanger humanity?

Roger Kotila, Ph.D. is a psychologist (ret.) with many years of clinical experience with the California Dept. of Corrections doing psychiatric diagnosis and treatment with inmates. President of Democratic World Federalists and Editor of Earth Federation News & Views, he supports a “new UN” under the Earth Constitution.  Email: earthstarradio@aol.com

Anticopyright: Editorials and articles originated on TMS may be freely reprinted, disseminated, translated and used as background material, provided an acknowledgement and link to the source, TMS: UN Charter’s “Sovereignty” Gives Brazil the Legal Right to Destroy the Lungs of the Earth, is included. Thank you.