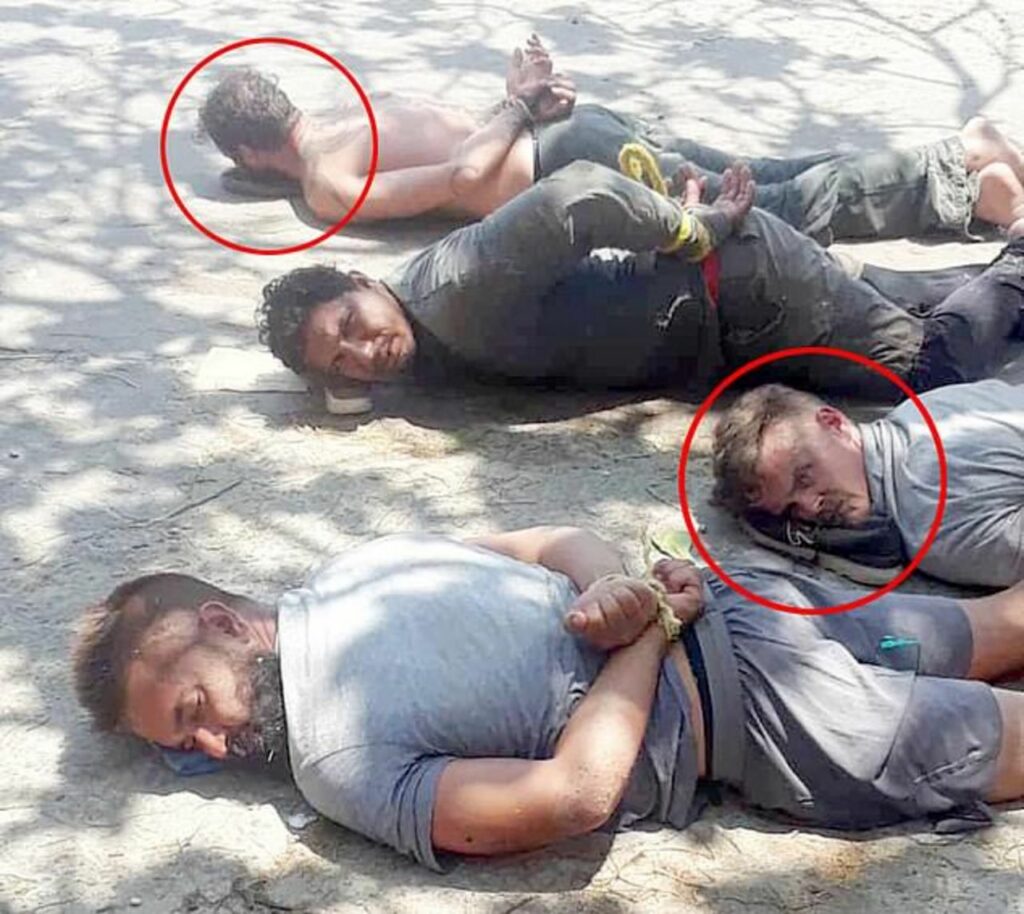 US mercenaries Airan Berry (circled at top) and Luke Denman (bottom) after being captured in Venezuela.

3 Nov 2020 – Senior Trump administration officials were in on the planning of and offered assistance to the abortive May 3, 2020, invasion of Venezuela carried out by a mercenary band that included at least two former US special forces operatives, according to a lawsuit filed in Miami, Florida, last Friday [30 Oct].

The conspiracy to carry out the illegal invasion was hatched, at least in part, at the Trump Hotel in Washington D.C. and at a Trump golf course in Florida, and was facilitated by individuals with close ties to the US president and Vice President Mike Pence.

The invasion, referred to as the “Bay of Piglets” due to its resemblance to the debacle suffered by the 1961 CIA-organized invasion of Cuba—albeit on a far smaller scale—ended with the capture of the two American ex-soldiers, Luke Denman and Airan Berry, along with 45 Venezuelan mercenaries. At least six others were killed in a separate landing on Venezuela’s northern Caribbean coast. Denman and Berry were sentenced by Venezuelan authorities to 20 years in prison on conspiracy and terrorism charges.

The $1.4 million breach of contract lawsuit has been brought by Jordan Goudreau, a former Green Beret who heads the Florida-based security contractor Silvercorp USA that organized the failed landing, against J.J. Rendón. A multi-millionaire political consultant who has assisted right-wing campaigns across Latin America, Rendón had been tapped by the US-backed puppet, self-proclaimed “interim president” Juan Guaidó, to form a “strategic committee” to develop plans for the overthrow of Venezuelan President Nicolás Maduro.

Rendón was dismissed from this post shortly after the failure of the invasion and the publication of a “General Services Agreement” he had signed with Goudreau. With his lawsuit and in an exclusive interview with the Miami Herald and its parent company McClatchy, Goudreau has brought to light portions of this agreement that had previously been concealed.

An addendum spells out the purpose of the operation, vaguely referred to in the agreement as providing assistance in procurement, logistics and “project execution and advisement.” The addendum states clearly that Silvercorp would “advise and assist … in planning and executing an operation to capture/detain/remove Nicolás Maduro (hereafter, ‘Primary Objective’), remove current regime, and install recognized Venezuelan President Juan Guaidó.”

As the captured American mercenaries acknowledged, the plan had been for the landing parties to drive to Caracas, Venezuela’s capital, seize the airport and then kidnap Maduro and bundle him onto an aircraft bound for the US.

An additional previously unknown clause stipulates that in the event of the kind of fiasco that transpired, Guaidó would be free to wash his hands of the entire affair. “If for any reason Project Resolute Operation does not succeed, President Guaidó will maintain deniability and be absolved from all knowledge and fault by all parties,” it states.

This is precisely what he did. While Guaidó’s signature appeared on the contract (he claimed it was forged) and a recording was released in which the US-backed “interim president” spoke with Goudreau, urging him on in the operation, Guaidó insisted he knew nothing about it.

Gourdreau’s lawsuit names Andrew Horn, a former aide to Vice President Pence, and Jason Beardsley, an ex-Green Beret who is an advisor to the Department of Veterans Affairs, as the two US officials who discussed the invasion plot with him. He said that Horn had assured him that “licenses from the United States Government regarding the procurement of weapons and armament for the project were forthcoming.”

A spokesman for Pence issued a statement claiming the Vice President “has absolutely no knowledge of the rogue plot in Venezuela and does not know Mr. Horn,” who is reported to have worked as an intern for then-Representative Pence in 2003. Following the failed invasion plot, Horn left the vice president’s office to work for the National Security Council.

Another reported link between Pence and the plot flowed through Roen Kraft, heir to the Kraft Food fortune. The lawsuit states that Kraft, who had pledged to raise private funds for the coup plot, told Goudreau in August 2019 that he had spoken to Pence about it and the Vice President “stated that he was very interested in the project and that as soon as it was successful, ‘all doors would be open.’”

Named as having facilitated connections between Silvercorp, Guaidó and US government officials are Nestor Sainz, a former US State Department official, and Travis Lucas, a lobbyist and lawyer who represented Trump’s former bodyguard and director of the Oval Office Keith Schiller in 2017, when Schiller appeared as a witness before the House Intelligence Committee as part of its “Russiagate” inquiry. Goudreau said that it was Lucas who introduced him to the two government officials. He showed the Herald invoices demonstrating that Lucas had billed the military contractor $30,000 for legal advice on foreign lobbying and arms exports.

The lawsuit also states that a rival bid for the Venezuelan invasion-coup operation had been tendered by Erik Prince, whose Frontier Services Group is a successor to the infamous Blackwater security firm involved in war crimes in Iraq. Prince’s plan reportedly would have cost $500 million—more than twice as much as the Silvercorp contract—and involved an invasion force of 5,000 mercenaries. Prince is the brother of Trump’s Education Secretary Betsy DeVos.

Prince’s lawyer Matthew Schwartz denied that he had submitted the proposal, the Herald reported, but added that “he does believe strongly that any action taken in Venezuela must be swift and decisive to avoid a protracted civil war.”

The vast sums being discussed to pay for the mercenary operations were to come out of the oil revenues stolen from Venezuela under the US “maximum pressure” sanctions campaign.

This week the Trump administration has ratcheted up these sanctions significantly, lifting a humanitarian exemption that had previously been maintained for swaps of Venezuelan crude oil for diesel needed to fuel power plants and trucks used to transport the country’s food supplies. International energy firms like Spain’s Repsol, Italy’s Eni and India’s Reliance that had engaged in the swaps will now be open to secondary sanctions unless they halt the deals. A broad range of NGOs had urged the Trump administration not to proceed with the escalation, warning that it would lead to increased hunger, disease and death.

The homicidal escalation of Washington’s attacks on the Venezuelan people is driven by the abject failure of its attempts to foment a popular uprising or even a military coup in support of its puppet Guaidó, whose support in the country has dwindled to insignificance. At the same time, the Trump administration is pursuing a policy of maximum aggression in an attempt to curry favor with right-wing Cuban exiles in Florida, a core Republican base in the 2020 presidential election.

Democratic presidential candidate Joe Biden, meanwhile, took pains to rebut Republican charges that he was “soft” on Maduro. The Biden campaign insisted that, as far as Biden was concerned, “there’s nothing for us to talk about” with the Venezuelan president. It also pointed out that Biden was the first candidate running in the Democratic primaries to support Trump’s recognition of the puppet Guaidó as Venezuela’s “legitimate” president. Under the Obama-Biden administration, the US government declared that Venezuela posed a threat to the US tantamount to a “national emergency,” justifying draconian sanctions.

Underlying this bipartisan policy is the drive by US imperialism to reassert control over Venezuela’s oil reserves, the largest on the planet, and to deny access to these resources to its rivals, in particular China.

Amid the new revelations about the invasion-coup plot and escalating threats from both major parties, Cilia Flores, the former president of Venezuela’s National Assembly and its former attorney general, who is married to President Maduro, gave an interview in which she insisted that “at any moment, I don’t know, it could be sooner rather than later, there can be a rapprochement” between the US and Venezuela.

She continued, “Here in Venezuela, there are US companies that have interests, they have experience, they have been partners of PdVSA (Venezuela’s state-run oil company), they can keep working,” she said. She added that the US economic blockade had “not only affected Venezuela … but it has also prejudiced US citizens who … came to Venezuela to invest and to earn and they made them lose.”

Flores went on to praise the recently approved “anti-blockade law,” which critics charge is paving the way for PdVSA’s privatization, saying that it “sparked a lot of interest among international investors.” The law she said, served to reassure even those “who believe they are the owners of the world” that there is “no type of risk” in investing in Venezuela.

Representing the interests of a section of the Venezuelan bourgeoisie, the Maduro government is seeking to counter the country’s deepening crisis with a further turn to the right and a rapprochement with US imperialism. It is carrying out repression against the resistance of workers and the impoverished masses to deepening austerity, while pardoning and seeking an accommodation with its right-wing opposition.

The struggle to defend Venezuela from imperialist aggression and the conditions and rights of the working masses from the relentless attacks of the government and the capitalist ruling class it represents can be carried out only by means of the independent struggle of the Venezuelan working class, united with that of workers throughout the hemisphere, in a common fight for socialism.