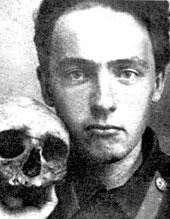 Velimir Khlebnikov was a shooting star of Russian culture in the years just prior to the start of the First World War. He was part of a small creative circle of poets, painters and writers who wanted to leave the old behind and set the stage for the future such as the abstract painter Kazimir Malevich.  They called themselves “The Futurians”. They were interested in being avenues for the Spirit which they saw at work in peasant life and in shamans’ visions; however, the Spirit was very lacking in the works of the ruling nobility and commercial elite.

As Charlotte Douglas notes in her study of Khlebnikov:

“To tune mankind into harmony with the universe – that was Khlebnikov’s vocation.  He wanted to make the Planet Earth fit for the future, to free it from the deadly gravitational pull of everyday lying and pretense, from the tyranny of petty human instincts and the slow death of comfort and complacency.” (1)

“Old ones!  You are holding back the fast advance of humanity. You are preventing the boiling locomotive of youth from crossing the mountain that lies in its path.  We have broken the locks and see what your freight cars contain: tombstones for the young.”

The Futurian Movement as such lasted from 1911 until 1915 when its members were dispersed by the start of the World War, the 1917 revolutions and the civil war.  Khlebnikov died in 1922 just as Stalin was consolidating his power.  Stalin would put an end to artistic creativity. 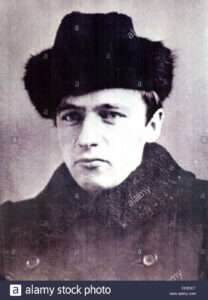 The Futurians were concerned that Russia should play a creative role in the world, but they were also world citizens who wanted to create a worldwide network of creative scientists, artists and thinkers who would have a strong impact on world events.  As Khlebnikov wrote in his manifesto, To the Artists of the World:

“We have long been searching for a program that would act something like a lens capable of focusing the combined rays of the work of the artist and the work of the thinker toward a single point where they might join in a common task and be able to ignite even the cold essence of ice and turn it to a blazing bonfire.  Such a program, the lens capable of directing together your fiery courage and the cold intellect of the thinkers has now been discovered.”

The appeal for such a creative, politically-relevant network was written in early 1919 when much of the world was starting to recover from World War I.  However, Russia was sinking into a destructive civil war.  The Futurians were dispersed to many different areas and were never able to create such a network. The vision of a new network is now a challenge that we must meet.

Anticopyright: Editorials and articles originated on TMS may be freely reprinted, disseminated, translated and used as background material, provided an acknowledgement and link to the source, TMS: Velimir Khlebnikov (9 Nov 1885 – 28 Jun 1922): The Futurian and World Citizen, is included. Thank you.