Jesus recently walked into a bar somewhere in the Western World. He approached three sad‑faced gentlemen at a table, and greeted the first one:

“What’s troubling you, brother?” he asked.

“My eyes. I keep getting stronger and stronger glasses, and I still can’t see.” Jesus touched the man, who ran outside to tell the world about his now 20‑20 vision.

The next gentleman couldn’t hear Jesus’ questions, so The Lord just touched his ears, restoring his hearing to perfection. This man, too, ran out the door, probably on his way to the audiologist to get a hearing‑aid refund.

The third man leapt from his chair and backed up against the wall, even before Jesus could greet him. 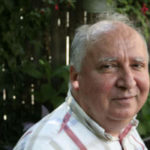 Anticopyright: Editorials and articles originated on TMS may be freely reprinted, disseminated, translated and used as background material, provided an acknowledgement and link to the source, TMS: Holy Spoiler, is included. Thank you.