A long and cruel siege, constant Israeli attacks resulting in the killing of countless civilians, destruction of homes and infrastructure, extreme poverty, and trauma remain the daily bread of Palestinians in Gaza.

22 Dec 2020 – A report published by the United Nations in 2018 stated that by the year 2020 the Gaza Strip would be uninhabitable. It said specifically that, “the United Nations has stated that Gaza may well be unlivable by 2020.” The report emphasized also that “Michael Lynk, Special Rapporteur on the Situation of Human Rights in the Palestinian Territories Occupied Since 1967, drew attention to Israel’s persistent non-cooperation with the Special Rapporteur’s mandate. As with his two predecessors, Israel has not granted him entry to visit the country, nor the Occupied Palestinian territory.” Anyone who thinks that the Gaza Strip was liveable prior to 2020 is out of their mind.

The Gaza Strip has been a humanitarian disaster since it was artificially created in the aftermath of the 1948 Zionist campaign of ethnic cleansing. It was created primarily as a holding place for the hundreds of thousands of Palestinians driven off of their lands by Zionist terrorists in southern Palestine. Impoverished and homeless, these refugees were forced to survive on handouts, and today they make up more than half of the Gaza Strip’s 2.2 million inhabitants. Considering the high standard of living Jewish citizens of Israel in that part of the country enjoy, living as they do on the very lands from which the Palestinians were exiled, the “Strip” was never “liveable.”

Now 2020 has come and gone, the United Nations report is shelved, and not a thing has changed. Over two million people remain imprisoned by Israel in the Gaza Strip. They suffer from a lack of the most basic needs like drinkable water, electricity, medicine, and nutrition. Israel also denies them basic human rights while Israeli Jews living minutes away enjoy a standard of living that is, by any measure, enviable with full access to the finest health care, nutrition, and clean water. 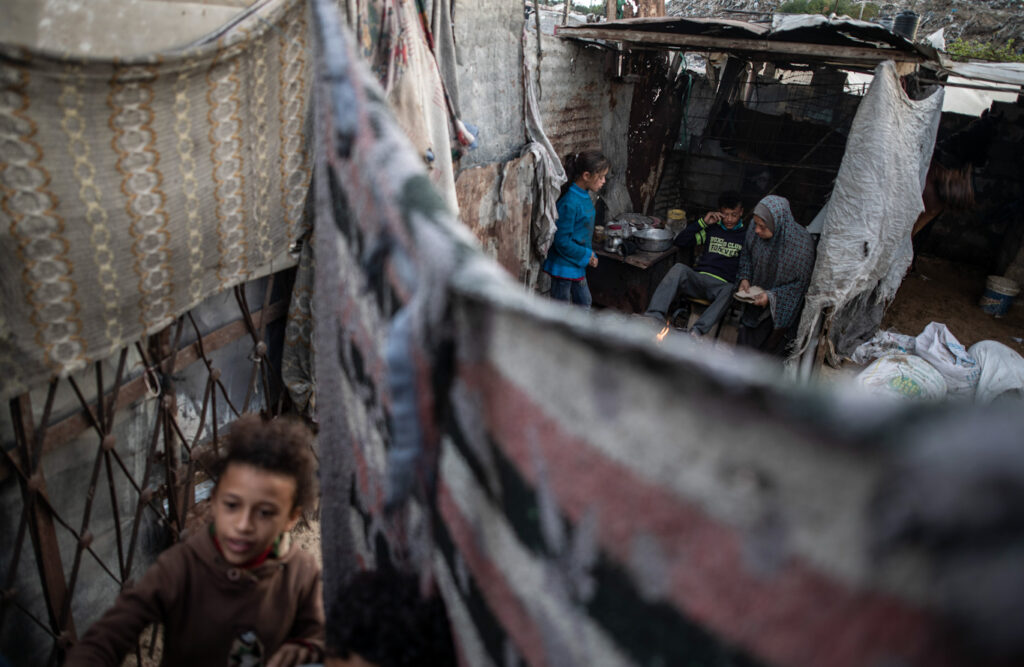 A Palestinian family prepares tea in their house in a slum on the outskirts of Khan Younis Refugee Camp, in the southern Gaza Strip, Wednesday, Nov. 25, 2020. Israel’s blockade of the Hamas-ruled Gaza Strip has cost the seaside territory as much as $16.7 billion in economic losses and caused its poverty and unemployment rates to skyrocket, a U.N. report said Wednesday, as it called on Israel to lift the 13-year closure.
(AP Photo/Khalil Hamra)

A European delegation comes to visit

A delegation of European representatives recently visited Gaza, yet Europeans have not used their influence, political or otherwise, to end Israeli violations of human rights and international law.

It would not have taken much for EU representatives to see the devastation, poverty, and severe shortages experienced by the people of Gaza. All one needs to do is drive through the Gaza Strip to see the evidence, and yet no change seems to be forthcoming from the Europeans.

In fact, according to the Israeli press, Germany just announced that in order to provide Israel with a European made vaccine for Covid-19, “Germany used its influence in the EU to bend the rule that a European-produced vaccination would be given to European countries first. Germany justified the decision in part through its “historical commitment to supporting Israel.” Knowing full well that millions of Palestinians are denied health care and that the spread of Covid-19 among Palestinians is alarming, no such commitment was made to assist the Palestinians in their fight against the deadly disease.. 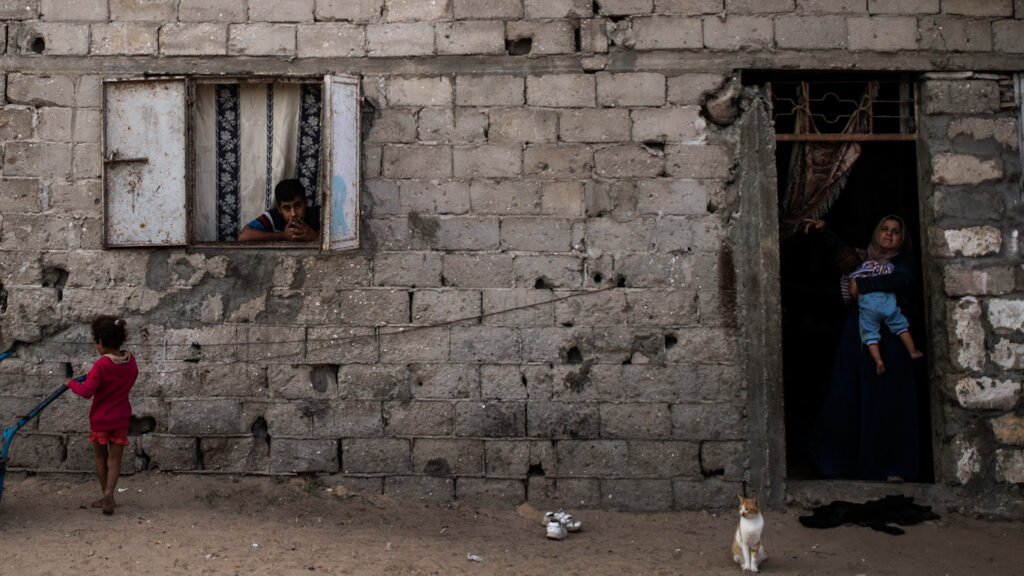 Palestinians are seen looking on from their house in a slum on the outskirts of Khan Younis Refugee Camp, in the southern Gaza Strip, Wednesday, Nov. 25, 2020. (AP Photo/Khalil Hamra)

The comfort that Europeans display as they cooperate with the State of Israel, even as they claim to be champions of human rights, amounts to complicity. According to the Geneva Convention, particularly the Rome Statute, European cooperation with Israel constitutes complicity in genocide. When one looks at the definition of genocide and compares it with the actions of Israel in Gaza, it is quite clear that the Zionist State is engaged in genocide.

Convention on the Prevention and Punishment of the Crime of Genocide

In the present Convention, genocide means any of the following acts committed with intent to destroy, in whole or in part, a national, ethnical, racial or religious group, as such:

Three of the five examples given here are constantly committed by Israel in Gaza. Furthermore, Article II of the Genocide Convention “contains a narrow definition of the crime of genocide, which includes two main elements,” one of which is the “intent to destroy, in whole or in part, a national, ethnical, racial or religious group, as such.” Israeli attacks on Gaza for over seven decades  clearly demonstrate that they are part of a larger strategy and that there is clear intent to bring about the destruction of a people.

According to a report published by Human Rights Watch (HRW), the issue of complicity with genocide is quite clear. “Prior jurisprudence has defined the term complicity as aiding and abetting, instigating, and procuring […] Complicity to commit genocide in Article 2(3)(e) refers to all acts of assistance or encouragement that have substantially contributed to, or have had a substantial effect on, the completion of the crime of genocide.” 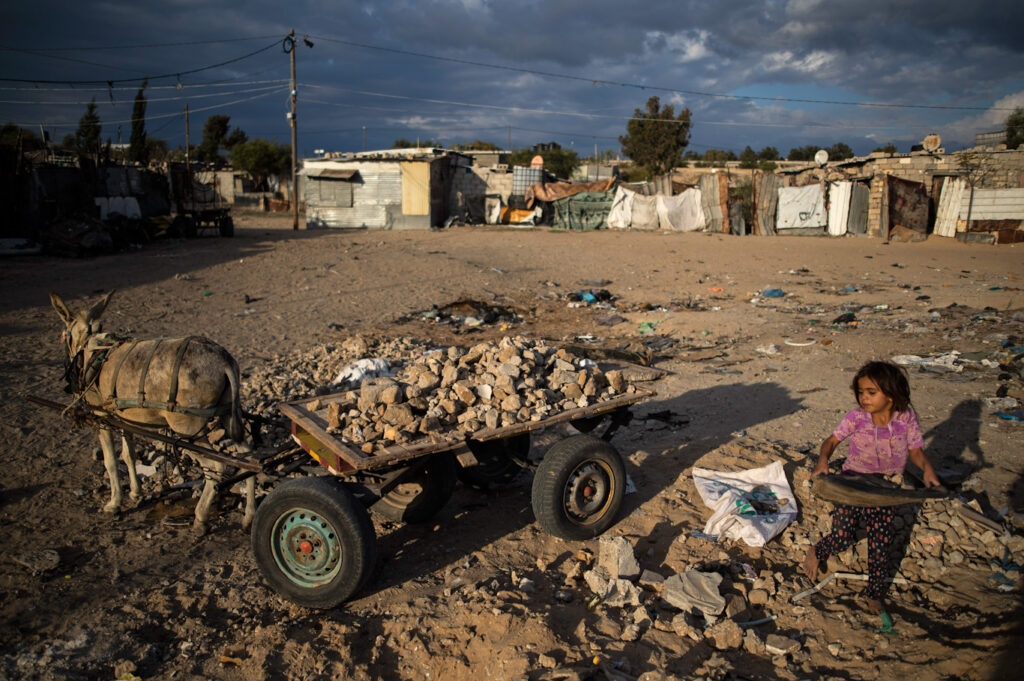 A Palestinian girl walks next to a donkey carte loaded with rocks in a slum on the outskirts of Khan Younis Refugee Camp, in the southern Gaza Strip, Wednesday, Nov. 25, 2020. (AP Photo/Khalil Hamra)

The report defined the following as elements of complicity in genocide:

According to that definition, both the EU states and the United States are complicit in the crime of genocide.

Human Rights Watch maintains that Israel has, “entrenched discriminatory systems that treat Palestinians unequally.”  It “involves systematic rights abuses, including collective punishment, routine use of excessive lethal force against protesters, and prolonged administrative detention without charge or trial for hundreds.”

It continues to state that Israel, “builds and supports illegal settlements […]expropriating Palestinian land and imposing burdens on Palestinians but not on settlers, restricting their access to basic services and making it nearly impossible for them to build.”

Regarding the Gaza Strip, HRW writes that “Israel’s more than decade-long closure of Gaza severely restricts the movement of people and goods, with devastating humanitarian impact.”

The first order of business needs to be the immediate and unconditional lifting of the siege imposed on the Gaza Strip since 2007. A no-fly zone monitored by UN or European naval forces must be imposed on all Israeli aircraft. In addition to these measures, humanitarian relief must be made available to the people of Gaza without delay.

Israel must be sanctioned and all military and economic cooperation with Israel must be stopped until such time that it complies with international law and ends all its violations of human rights. This should be followed by setting a date for free and fair one person, one vote elections in all of historic Palestine. Then processes must be put in place for the repatriation of Palestinian refugees, and funding must be set aside for payment of reparations and restitution.

Israel must also be held accountable for its violations of international law since 1948 and Israeli politicians, as well as military commanders, must be investigated and charged with war crimes.

European countries are fully aware of the reality that exists in Gaza. A long and cruel siege, constant Israeli attacks resulting in the killing of countless civilians, destruction of homes and infrastructure, extreme poverty, and trauma are the daily bread of Palestinians in Gaza.

The reality in Gaza is no secret and Israeli violations of international law are well known. However, European governments are in the habit of seeing colonized and formerly colonized people as needing aid and doing little to provide the aid. The aid they provide is sometimes monetary and sometimes humanitarian in the form of food items, but rarely is it sufficient. In the case of the Gaza Strip, real political action is called for, but it is not clear if and when the EU will be willing to act.

Miko Peled is an author and human rights activist born in Jerusalem. He is the author of “The General’s Son. Journey of an Israeli in Palestine,” and “Injustice, the Story of the Holy Land Foundation Five.”