Leading Scholars’ Consensus Was Clear: Neither ICJ nor ICC on Their Own Will Deliver Rohingyas from Hell

On 15 December 2020, a group of leading scholars and experts from Canada, USA, and Ireland involved in the global campaign to end Myanmar’s genocide of Rohingyas held a legal roundtable, jointly organised by the Free Rohingya Coalition and FORSEA.

Rohingyas refugees gather near the fence at the ‘no man’s land’ zone between the Bangladesh-Myanmar border. The Gambia has announced it’ll take a case against Myanmar to the ICJ. EPA/Nyein Chan Naing

17 Dec 2020 – Leading scholars’ consensus was loud and clear: neither ICJ nor ICC, in and of themselves, will deliver Rohingyas on their own from their decades-long hell – namely Myanmar’s institutionalized persecution of their community – protected under the Genocide Convention. In their assessment, Myanmar is persecuting this targeted ethnic group, within their historical and demographic pocket along the Bangladesh-Myanmar borderlands with the discernible intent to physically destroy them in whole or in substantial part. 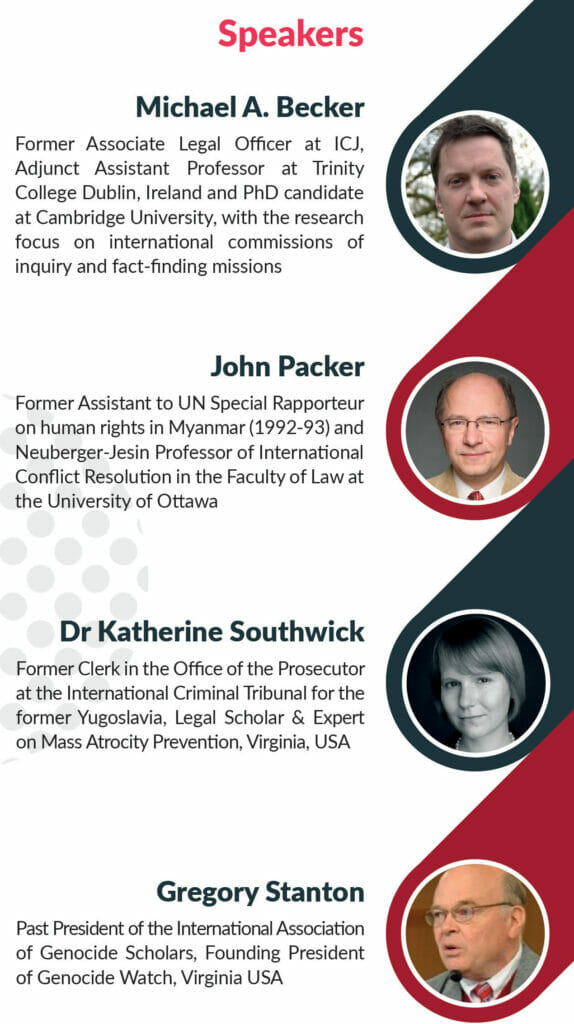 Among the panellists were Gregory Stanton, past-President of the International Association of Genocide Scholars and the founding President of Genocide Watch whose 10-stage-model of genocide is widely used by scholars and activists to understand genocidal destruction of national minorities around the world;  a US legal expert on genocide prevention Dr  Katherine Southwick who previously worked in the Prosecutor’s Office at the International Criminal Tribunal on former Yugoslavia and who now serves as an independent advisor to the US Holocaust Memorial Museum in Washington, DC, Michael A Becker, former Associate Legal Officer at the ICJ who now teaches international law at Ireland’s Trinity College, Dublin and who specialises in the international commissions of enquiry and fact-finding missions, and Professor John Packer at the University of Ottawa in Canada who served as legal assistant to the first UN Special Rapporteur on human rights situation in Myanmar in 1992-1993.

Dr Maung Zarni, FORSEA co-founder and a UK-based non-resident fellow with the (Genocide) Documentation Center of Cambodia, moderated the discussions which were broadcast LIVE on the Free Rohingya Coalition Facebook page.

In his introductory remarks, the Burmese host called the panel’s attention to the fact that Bangladesh has embarked on the widely condemned “coercive relocation” of targeted 100,000 Rohingya refugees to an unsafe and isolated island of Bhasan Char. Zarni attributed this widely criticized move by Dhaka to the latter’s frustrations over Myanmar’s palpable lack of any genuine political will to repatriate nearly 1 million Rohingya survivors who fled the past waves of genocidal purges and communal destruction by Myanmar government troops over the last 40 years. More pertinent to the discussion, he pointed out the absence of positive impact, or behavioural, or policy shift among Myanmar leaders as the result of international legal efforts to hold to account both Myanmar as a state party to the Genocide Convention and individual leaders such as the senior and command generals and civilian and religious leaders such as Aung San Suu Kyi and the Saffron-robed monk Wirathu.

With admirable clarity, Michael Becker, formerly a legal officer at the ICJ, gave a very likely time frame for the various stages of The Gambia vs Myanmar, the genocide case against Myanmar. The former ICJ legal staff raised the possibility of Myanmar resorting to tactics designed to delay the ICJ case, for instance, repeating its tried and failed challenge of the Court’s jurisdiction over the case, or dismissing and discrediting Gambia’s evidence of genocidal intent which so far rested primarily on the 4-reports of the United Nations Human Rights Council’s International Independent Fact-Finding Mission, presenting the “alternative facts” gathered by its own official International Commission of Enquiry established by Aung San Suu Kyi, Myanmar Agent in the ICJ case.

Becker also cautioned against third country interventions in the Gambia vs Myanmar in support of Gambia, such as has been declared by Canada, Netherlands and Maldives, all state parties to the Genocide Convention. In his view, Myanmar can manipulate these interventions to its advantage to prolong the proceedings.

The two other legal experts, John Packer and Gregory Stanton, expressed a different type of concern. Examining the past ruling in the Serbia vs Bosnia case where the ICJ ruled that the state of Serbia (under Milosevic) was not guilty of committing a genocide, but only guilty in its state failure to prevent the genocide from being committed against Bosnian Muslims (Bosniaks). In Stanton’s view the Serbian state’s involvement in the scale of mass murder and destruction against Bosnian Muslims – not just in the infamous Srebrenica but in many different locations – should have prevented the ICJ from reaching that “not-guilty” ruling. 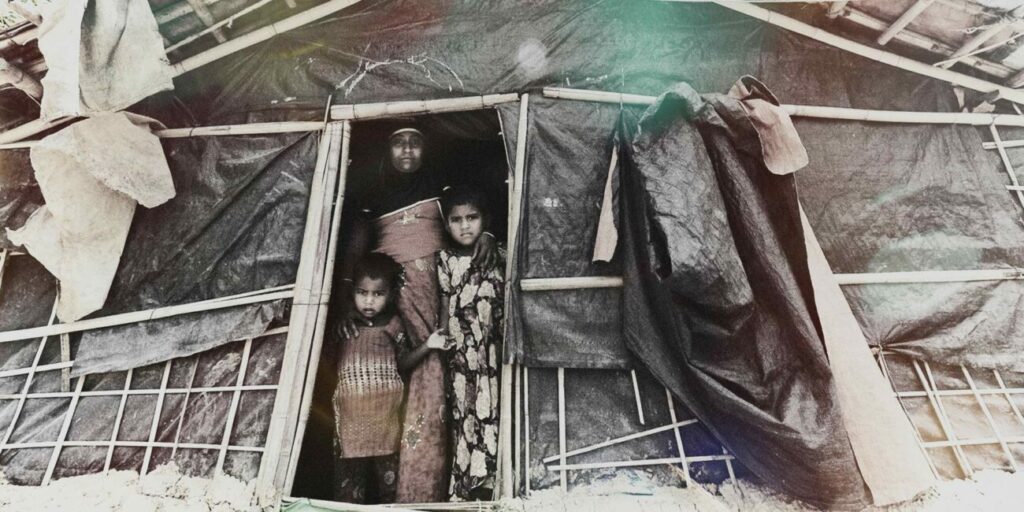 Stanton argued that the court could repeat that utterly incorrect ruling against Gambia’s genocide case: Myanmar’s Canadian lawyer William Schabas, also past President of the International Association of Genocide Scholars and former colleague of Stanton, was pushing the same but false reasoning that prevailed in the Serbia vs Bosnia case.  According to this exclusivity of genocidal intent, the intent to criminally deport or carry out the forced relocation of targeted ethnic community from one region to another, or across national boundaries necessarily precludes the other intents, for instance, the intent to physically destroy the victim group.  Indeed, a multiplicity of intents and motives are typically present in human deeds, virtuous or criminal. To argue that when one intent is present other intents cannot be equally valid is nonsensical and anti-empirical.

Stanton and colleagues had previously published research findings on the disingenuous uses of the term “ethnic cleansing”, a term the late Milosevic used as a spin against the genocide charges in Serbian case, an acceptable speech act of “bleaching” genocide.

In addition, Stanton recalled a personal conversation with the Presiding Judge at the ICJ in the Serbia vs Bosnia wherein, to his deep moral outrage, he learned that the ICJ did not bother to share directly case-relevant evidence or information in its possession to the International Criminal Tribunal on former Yugoslavia (at ICC) which was tasked to establish individual criminal responsibility of Serbian military and political leaders such as Milosevic, despite the fact that the two courts are located in the same Dutch city – the Hague.

Professor John Packer, on his part, expressed his palpable discontent over the fact that the ICJ, the international court of, for and by the (UN member) states, has not factored in or made provisions for the victims of Myanmar’s international state crime in alleged violations of the Genocide Convention, a binding inter-state treaty.

He pointed out that the essence of these international legal effort at the ICJ and the ICC will need to be justice for the wronged communities.

Besides the ICJ has enormous power that it does not use to ensure that victims are properly represented in the Gambia vs Myanmar genocide case. The panelists agreed that while the ICC makes dedicated efforts to hear victims’ voices and accord them a meaningful role in the criminal proceedings neither the ICJ nor even the Gambia legal team has made any efforts for keeping the victims fully informed, for instance, about Myanmar’s 6-monthly reports which the ICJ has ordered throughout the duration of the court proceedings.

Packer reminded Rohingya viewers – and their activist supporters that the Gambia vs Myanmar is primarily about the state of Gambia and what its lawyers decide as their priorities.  This fact in turn necessitates a wider Rohingya-focused campaign to seek justice, as the victims see fit. 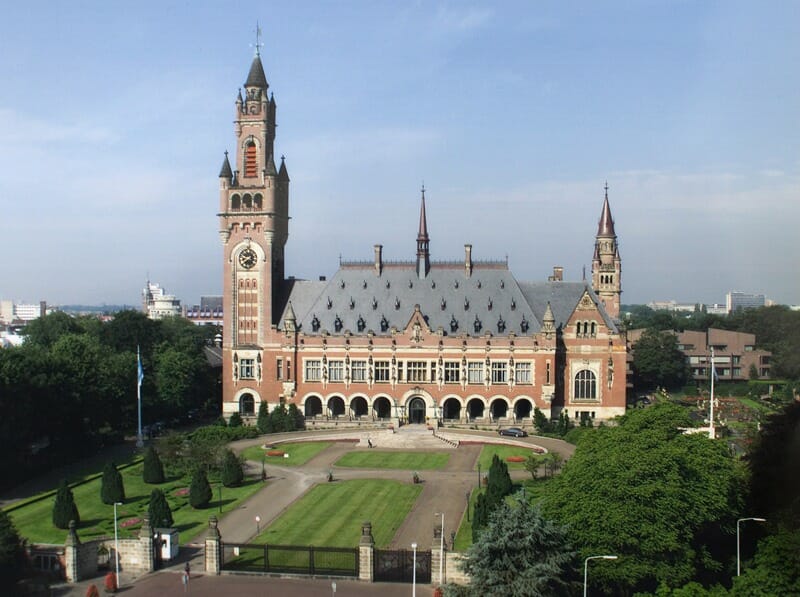 The Peace Palace in The Hague, Netherlands, seat of the International Court of Justice (ICJ).

Panelists did not comment much on the International Criminal Court’s full-investigation into Myanmar’s crimes related to the crime of deportation of large scale Rohingya across the ICC-signatory state of Bangladesh, nor the Universal Jurisdictions case filed at an Argentinian court, using the Pinochet Precedent. Stanton pointed out that the genocide is “not even on the agenda of the ICC” insofar as its investigation of Myanmar’s crimes. Even if the indictments and arrest warrants are issued against Myanmar perpetrators there are some practical and political issues in terms of the Interpol’s involvement with Myanmar perpetrators.

Having weighed in on this vital issue of justice in the wider, beyond-judicial sense, Dr Katherine Southwick urged human rights campaigns to leverage these international legal accountability efforts beyond the physical confines of the courts in the Hague. She stressed both moral and legal obligations of various states and even the Security Council. The specialist on the international rule of law argued that while Myanmar is clearly the perpetrating state other UN member states which are hosting sizeable Rohingya populations need to uphold various legal and moral principles in dealing with large scale refugee populations on their soil.  Some of the host countries such as Bangladesh (and Malaysia) ought to start local integration schemes, instead of trampling on the rights of Rohingyas both as refugees and human persons.

Additionally, she argued that even the persistent calls for various UN instruments to refer Myanmar the Security Council are morally important if only such calls – and expected vetoes by China and Russia – shine the light on the unconscionable failures of Russia and China. With John Packer she is completely in favour of Third Party intervention in the Gambia vs Myanmar case at the ICJ by as many state parties to the Genocide Convention (out of nearly 150 in total) as can be persuaded.

The panelists were also painfully aware that the current Security Council and its veto system has largely failed victim communities around the world, from Palestinians and Khmers of Khmer Rouge Cambodia to present-day Uyghurs, in addition to Rohingyas and many others. For leading UN member states such as USA and China themselves have acted criminally or provided blanket impunity to their pet clients, or proxy states, when the latter commit international state crimes (for instance, the case of the officially Jewish state of Israel against the Palestinians) since the Holocaust ended 70 years ago.

Don’t give up! Our hearts are with you

Looking at ways to leverage these UN judicial mechanisms, Professor Stanton was strongly in favour of taking Facebook, an extremely effective platform for hate and genocidal racism against Rohingyas, to court for its criminal responsibility and seeking financial compensations for the Rohingya survivors by the billions of US$.

The discussions ended with the panelists’ humanistic pledge of solidarity to Rohingya survivors of Myanmar genocide, above and beyond the call of one’s own legal or professional background. Their message: “Don’t give up. Our hearts are with you.”