Companies’ attempts at hazard pay have been paltry and fleeting as employees are threatened for protesting working conditions. 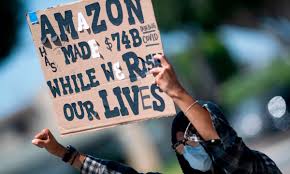 15 Jan 2021 – Billionaires in the US have increased their net worth by more than $1tn during the coronavirus pandemic, while many of their US workers have struggled with coronavirus risks in workplaces, for little to no extra pay to work in hazardous conditions, and millions of other Americans have struggled to survive on unemployment.

The Amazon CEO and founder, Jeff Bezos, added more than $70bn to his net worth during the coronavirus pandemic in 2020, which is now nearly $185bn.

As Amazon’s sales have soared, workers at Amazon and Amazon-owned grocery chain Whole Foods have protested against unsafe working conditions and the pressures to keep up with demand. 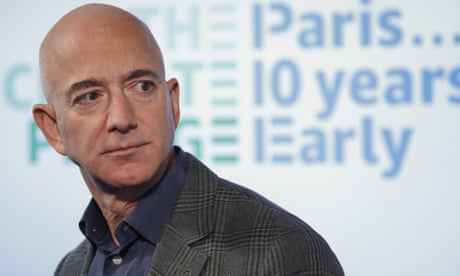 Ten billionaires reap $400bn boost to wealth during pandemic
*************
Several workers who participated in or led protests at Amazon over working conditions have alleged they were fired in retaliation and Amazon is fighting federal complaints alleging at least two of the firings violated US labor laws.

Profits and stockholder shares have soared through 2020 by billions of dollars, but Amazon has only provided a fraction of those extra earnings in hazard pay and bonuses to workers, according to an analysis conducted by the Brookings Institution.

Amazon ended hazard pay in June 2020, and instead have provided sporadic one-time bonuses to workers during the pandemic. On average, Amazon workers have seen a $0.99-an-hour pay bump during the pandemic, compared with Bezos’s hourly wealth increase of $11.7m.

“What they considered hazard pay was just for show,” said an Amazon warehouse employee in Baltimore, Maryland who requested to remain anonymous for fear of retaliation. “We couldn’t see a difference unless we were willing to work almost 60 hours a week. Several of us had no choice because we’re the breadwinners of our family. It’s infuriating that we live in fear every day because of minimal efforts to protect us, while executives take in tons of money while sitting safely at home.”

Jessica Oneto, a Whole Foods employee for four years in Redwood City, California, quit in October due in part to burnout from working conditions during the pandemic.

“They gave us hazard pay for maybe a couple months. It was only $2 and they literally took it away as the pandemic got worse. One of the biggest companies couldn’t afford to keep it up?” Oneto said.

Elon Musk, the owner of Tesla Motors, saw his wealth surge by more than $140bn during the coronavirus pandemic and surpassed Bezos as the wealthiest person in the world with a total net worth of $195bn.

Tesla’s share prices have soared during the coronavirus pandemic, but workers for the company have been subjected to a Covid-19 outbreak at the Fremont, California, plant earlier this year when Musk defied local shutdown orders to reopen the plant and restart production.

Musk sent out an internal email to all employees implying they would lose unemployment benefits if they didn’t show up to work in defiance of the order, and at least two workers who took unpaid leave due to coronavirus fears for themselves and at-risk family members received termination notices for not showing up to work.

“While people in cubicles stay home to work, we can’t do that and we don’t get any hazard pay,” said a Tesla employee at the Fremont plant who asked to remain anonymous for fear of retaliation. “Nothing has changed. Musk can afford to do so much more and he doesn’t. I find it sickening to see how much Elon Musk’s wealth has grown while we take all the risks. All we get is a ‘thank you so much’ email.”

Another Tesla employee in Fremont cited ongoing mistreatment toward Black workers at Tesla amid several lawsuits alleging discrimination at Tesla, which Tesla has disputed.

“Musk has not once addressed this issue in his workplace or supported Black Lives Matter,” said the worker. “No hazard pay or bonus. They gave all regular workers their regular raise, but being that I’m maxed out at my position I didn’t get anything.”

Billionaire Bill Gates has seen his wealth increase by nearly $18bn through 2020, to $131bn. Though his initial fortune stems from co-founding Microsoft, Gates’s net worth has continued to climb through investments; his trust owns significant holdings in companies such as Amazon and his investment company Cascade Investments holds a more than 34% stake in the waste management company Republic Services.

During the pandemic, Republic Services approved $2bn in stock buybacks and paid out $387.1m in dividends to shareholders, but the company’s sanitation workers have not received any hazard pay or bonuses, even as residential trash has increased significantly due to widespread business closures.

“They gave us a couple $25 gift cards early in April or May but that was it,” said Yogi Miller, a sanitation worker for Republic Services in the Akron, Ohio, area. “During this time, workers would like to see a little bump in their pay as many people have spouses who have been laid off during this and now they’re a one income family. If we stopped picking up trash for a week or two, people would realize how essential it is the work we do.”