Brazil: 6 Patients Die of Asphyxiation as Hospitals in Manaus Run Out of Oxygen

16 Jan 2021 – Amid an explosive growth in COVID-19 hospitalizations, the Brazil’s Amazonian capital, Manaus, is experiencing days of terror with a collapse of the oxygen supply in its hospitals.

An entire wing of University Hospital patients died on Thursday [14 Jan] night due to lack of oxygen, six people in total. The deaths were reported by the Federal Public Ministry (MPF), which also stated that there was a lack of oxygen in 200 ICU beds that same day. The MPF does not rule out that other people died under similar circumstances.

Shocking images of desperate health professionals, unable to prevent the death of their patients, have caused a national commotion. Videos of the arrival of oxygen tanks in collapsed hospitals, while relatives clamored for the lives of their loved ones, circulated on social media this Friday.

Although new oxygen supplies have arrived in the city, the critical situation continues. According to the Ministry of Health, 480 people are waiting in line for an ICU bed. Fiocruz Amazonas infectious disease specialist Jesem Orellana reported that “some health professionals this morning [on Friday] were afraid that the amount of oxygen would not be enough to reach midnight with all patients adequately ventilated.”

Manaus’ largest hospital, the 28 de Agosto, was surrounded by the Military Police to prevent desperate family members from forcing their way into the crowded unit. The surgery supervisor at 28 de Agosto, José Francisco dos Santos, told the Correio do Povo: “There are people dying on ambulance stretchers because there is no way to get into the hospital… The poor management of  health care by the state is what permitted things to arrive at this point.”

The Correio do Povo also reported that the hospital is asking patients’ families to bring their own oxygen tanks. Santos said that doctors are decreasing patients’ oxygen flow to deal with the shortage: “It is an emergency measure, but it also has consequences. Patients will be left with sequelae for remaining for a long time with low oxygen flow. We are still fighting a war.”

The company responsible for Manaus’ oxygen supply, White Martins, declared that the demand for oxygen has increased five times in the last 15 days due to the growth in hospitalizations. The demand for oxygen reached 70,000 cubic meters per day, more than double what was required at the first peak of the pandemic in May, when it reached 30,000. The local production capacity is only 28,000 cubic meters.

While hospitals collapse without oxygen, infection rates are growing rapidly. On Thursday, the state of Amazonas had a record of 3,816 new infections in a single day, indicating that overcrowding in the health care system can reach even more explosive levels. 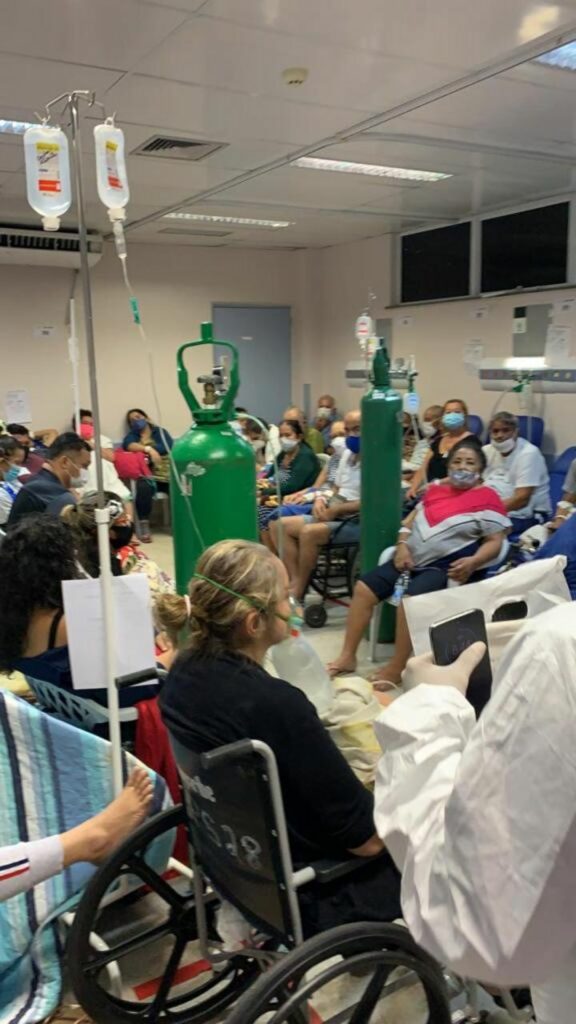 An ominous factor in the rising infection rates is the circulation of a new Brazilian variant of the coronavirus, discovered in Manaus in December. The Brazil-UK Centre for (Arbo)virus Discovery, Diagnosis, Genomics and Epidemiology detected this variant of the virus in 42 percent of infected patients tested in Manaus between December 15 and 23. The researchers indicate that it has genetic characteristics similar to the new more infectious variants recently discovered in the United Kingdom and South Africa.

The epidemiologist Jesem Orellana told the BBC: “[It is] quite likely that this possible new variant is one of the causes of the strong viral spread of COVID-19 in Manaus and therefore a threat not only to Brazil, but to mankind.”

The calamitous situation in Manaus has incited anger throughout the country against the administration of Brazil’s fascistic President Jair Bolsonaro. The hashtag #ImpeachmentBolsonaroUrgente (or, urgent impeachment of Bolsonaro) reached first place on Brazilian Twitter’s trending topics this Friday.

Bolsonaro and his government undeniably have a criminal responsibility for the catastrophe in Manaus, which he cynically denies. With his characteristic disdain, the president declared to his supporters on Friday morning: “Problems. We are always doing what we have to do. Problem in Manaus. Terrible, the problem in Manaus. Now, we have done our part. Resources, means.”

In addition to systematically supporting the herd immunity policy, which is responsible for the resurgence of high levels of infection in Manaus, Bolsonaro openly incited the defiance of orders to shut down economic activity in the face of an eminent collapse of the city’s health care system.

On December 28, in response to a protest organized by retail employees, which served as a pretext for the government of Amazonas stepping back from minimum restriction measures at the end of the year, Bolsonaro celebrated the fact that “in Manaus the people ignored the governor’s decree,” adding, “We can no longer stand lockdowns, more restrictive measures that break the economy.”

Bolsonaro’s government is under criminal investigation for having imposed upon the health care system in Manaus the “preventive” administration of drugs without proven efficacy for the treatment of COVID-19, chloroquine and ivermectin. This happened in recent weeks, already in the midst of the collapse.

In an official letter to the City Hall of Manaus, the Ministry of Health, headed by Gen. Eduardo Pazuello, asked to visit the coronavirus treatment centers last Monday, “to spread and adopt early treatment as a way to reduce the number of hospitalizations and deaths from the disease.”

The document continues: “We take the opportunity to emphasize the scientific evidence on the role of antiviral medications recommended by the Ministry of Health, thus making inadmissible, given the gravity of the health situation in Manaus, the non-adoption of such guidance [our emphasis].”

Having personally incited mobs to challenge restrictions on economic activities, and imposed the  the use of anti-scientific treatments, Bolsonaro’s government is also responding to the calamity in Manaus by promoting its militarist campaign.

Brazil’s vice president, Gen. Hamilton Mourão, indicated that the lack of oxygen in Manaus was directly related to the lack of resources for the Armed Forces, such as large airplanes: “A time like this arrives and we see that we cannot leave what is our last reserve, the Armed Forces, without capabilities,” he declared.

As in every part of the planet, the fight against the pandemic in Brazil, has proven to be a fight of the working class against capitalism and the ruling class drive toward dictatorial forms of rule.