Vaccines May Not Work as Well against the Coronavirus Variant Detected in South Africa, Research Shows–People May Also Face a Risk of Reinfection 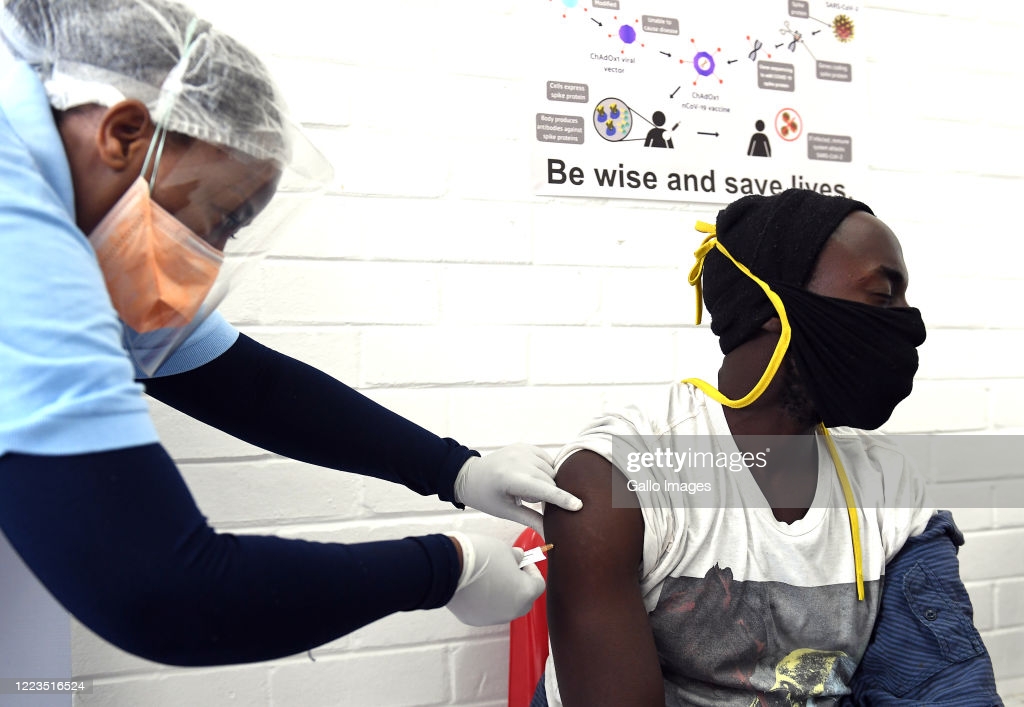 A volunteer receives an injection from a medical worker during the country’s first human clinical trial for a potential vaccine against COVID-19 on June 28, 2020 in Soweto, South Africa. The vaccine, developed by Oxford University will inoculate two thousand South Africans.
(Photo by Felix Dlangamandla/Beeld/Gallo Images via Getty Images)

22 Jan 2021 – At first, there was little evidence to suggest that COVID-19 vaccines wouldn’t work against the mutated, more infectious versions of the virus that have emerged in the last few months.

But preliminary research published this week suggests that a coronavirus variant detected in South Africa in December can partially evade the defenses vaccines build in our bodies’ immune systems.

Penny Moore, a researcher at South Africa’s National Institute for Communicable Diseases and co-author of the new study, said during a webinar on Monday that compelling data shows the mutations in 501.Y.V2 to be “problematic.”

Her group’s research found that in half of samples studied in the lab, antibodies in the blood of people who had recovered from COVID-19 were unable to stop the variant.

“Based on Penny’s data, it’s likely that the vaccine is going to be somewhat less effective, but how much less effective we don’t know,” David Montefiori, a virologist at Duke University Medical Center who was not involved in the study, told CNN.

The variant can dodge our body’s defenses

Antibodies are protective proteins that our immune system generates when it senses a foreign substance, or antigen, in the body. These proteins are generated during an infection, and they’re what a vaccine prompts the body to build in order to prevent illness.

In general, antibodies fight infection by learning to recognize a virus and signaling to the immune system that it should be destroyed. They do that by binding to the invader until it’s wiped out. But if a virus is different enough from others to evade existing antibodies’ search-and-destroy mechanisms, it can continue to wreak havoc.

The South African researchers set out to see whether antibodies developed in response to the original version of the coronavirus work to protect people from the new variant. They used blood samples from 44 patients who’d recovered from COVID-19 before the 501.Y.V2 variant was detected.

These results “may foreshadow reduced efficacy” of existing vaccines, the team wrote. They also warned that people who’ve gotten the original coronavirus may be at risk of new infections from variants like 501.Y.V2.

Still, Moore said more data is needed to draw firm conclusions about how the variant interacts with antibodies inside the body, especially among people who’ve been vaccinated. The research also did not look at other elements of the immune system, like B cells, which play a critical role in developing new antibodies.

Nathan Grubaugh, an epidemiologist from the Yale School of Public Health, said it’s hard to tell how well laboratory tests translate to reality in the body. A 90% reduction in protection during a lab test “may still mean complete protection in a human,” he told Insider.

As the virus mutates, vaccines may need to evolve

The 501Y.V2 variant has one particular mutation in its spike protein — the part the virus uses to invade cells — that has “been shown to reduce antibody recognition” among people who had a prior infection or vaccination, according to Francois Balloux, the director of the University College London Genetics Institute.

Other mutations in the spike protein contribute to 501.Y.V2’s increased infectiousness, the South African researchers said. That could explain why the country has been hit so hard since November. In the last two months, the number of new coronavirus cases per day in South Africa quintupled, from an average of 2,300 to 13,000. It hit a record high of nearly 22,000 cases on January 8, and the country’s test-positivity rate doubled in December. By the end of 2020, 501.Y.V2 had replaced almost all other versions of the coronavirus in South Africa.

It has spread to at least 20 countries.

Other variants like the one found in the UK have similar mutations in their spike protein. But a preliminary study from Pfizer-BioNTech found that the company’s coronavirus vaccine is effective against that variant.

Jesse Bloom, a biochemist a the Fred Hutch Institute in Seattle, said in a statement that he’s “optimistic that current vaccines will remain quite useful,” though he added that as the coronavirus continues to evolve, “eventually it may be necessary to update vaccines.”

An updated vaccine could be ‘rapidly deployed’

All viruses mutate. Most mutations are inconsequential, but occasionally one appears that undermines the immunity people have acquired from a vaccination or prior infection. The flu, for instance, mutates quickly, which is why we have to get a new flu shot every year, and why flu vaccines aren’t 100% effective.

Thee coronavirus mutates slower than the flu. That’s why Trevor Bedford, a virologist at Fred Hutch, predicted in April that “it will take the virus a few years to mutate enough to significantly hinder a vaccine.” But Bedford didn’t know at the time how much the virus would proliferate and how high case numbers would climb; the more chances a virus has to spread (and therefore replicate), the more likely mutations become.

On Wednesday, Bedford tweeted that “the emerging situation can be dealt with through a forthcoming vaccine update.”

BioNTech, Pfizer’s partner, said it could produce a new vaccine for a COVID-19 variant in about six weeks. Tal Zaks, Moderna’s chief medical officer, said his company’s process would be quick, too.

“I think our technology is very well suited to actually rapidly deploy a vaccine based on the new variant,” Zaks said in a recent presentation at the J.P. Morgan Healthcare Conference.

That’s because these mRNA vaccines don’t contain dead versions of virus, but rather genetic instructions for the body to make one of the virus’ signature proteins internally, thereby triggering an immune response. Tweaking those instructions is an easy switch.

The decision to sign off on a modified vaccine would then be up to regulators.

Immunity to a virus isn’t all or nothing

Even if the variant does reduce how well current vaccines work, that doesn’t mean protection from infection disappears completely, experts say.

“We often talk about immunity as sort of an all-or-nothing thing, but it’s not,” Jennie Lavine, a postdoctoral biology researcher at Emory University, told Insider.

The ideal level of protection is sterilizing immunity — when “we have such good immunity in the right places that the virus can’t even replicate if it gets in,” Lavine said.

But there’s plenty of middle ground between that and zero immunity. For example, Lavine said, “the virus might be able to replicate some, maybe causes mild pathology, maybe transmits for a day or two instead of five or six days.”

She added: “The chances that the new variant is getting us all the way from sterilizing immunity to no immunity is really unlikely.”

It also helps that existing vaccines are highly effective against the original virus.

“The Pfizer and Moderna vaccines are 95% effective — that’s an extraordinary level of efficacy,” Montefiori told CNN. “If it reduces to 90, 80, 70% effective, that is still very, very good and likely to have a major impact on the pandemic.”

Catherine Schuster-Bruce and Aria Bendix contributed reporting to this story.

Aylin Woodward is a science and environment reporter at Insider, where she focuses on all things related to climate change, anthropology and human evolution, and weird animal phenomena. She writes about natural disasters, extinctions, and extreme weather. Aylin is also well versed in archaeology, earth science, dinosaurs, and enjoys penning the occasional Hollywood science fiction debunk.