Why Are People Going Hungry in India Despite a Massive Grain Surplus?

12 Jan 2021 – Since late November, braving the bitter cold, hundreds of thousands of farmers have set up protest camps at various points on the borders of India’s capital, New Delhi. Their main demand is the withdrawal of the three farm laws rammed through parliament by the right-wing Narendra Modi government in September. Farmers fear these laws will drive down the prices they get for their produce and pave the way for greater corporatization of agriculture. Noted economist Prabhat Patnaik analyzes some of the key arguments being made in this context. 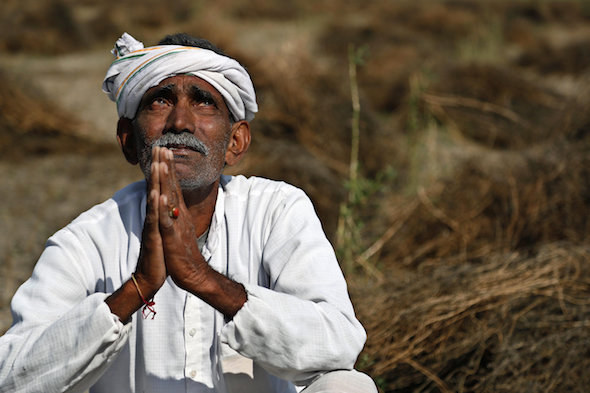 A farmer looks skyward as he sits amid his wheat crop in the Indian state of Rajasthan. (AP / Deepak Sharma)

The Indian intelligentsia has an incredible propensity to swallow the self-serving arguments of metropolitan capitalism that are typically supposed to constitute ‘economic wisdom,’ and nowhere is this more evident than in the case of India’s food economy. There are a plethora of center-page articles in newspapers these days suggesting that Indian kisans (farmers) should move away from producing food grains toward other crops, which is actually a demand that metropolitan countries have been making for quite some time. These countries have a surplus of food grains, and so they want India to import food grains from them to meet the excess of India’s domestic demand over domestic production. This would take the country back to the pre-Green Revolution days, and now members of the Indian intelligentsia are echoing, in various ways, this metropolitan demand to diversify away from food grains.

One of their arguments is that the kisans from the states of Punjab and Haryana are caught in a ‘cereal trap’ where they keep producing cereals that are not very profitable for them and of which the country now has a surplus because they are lured by the provision of a minimum support price (MSP) that reduces their risk. Sometimes the argument is put differently: the Punjab and Haryana kisans have to move away from MSP-supported activities to other more lucrative ones, for which Modi, perhaps precipitately, is providing a way through his three agriculture laws.

This entire position, apart from echoing the demand of advanced countries, and supporting the Modi government implicitly or explicitly, also shows the same contempt for kisans as shown by the government; these intellectuals are of the view that a bunch of ignoramuses cannot see what is good for them, but Modi can. But let us ignore the motives and prejudices of these intellectuals and just examine their argument.

There is no gainsaying that there are massive food grain stocks with the Food Corporation of India (FCI) at present and that this has become a regular feature of the Indian economy of late. But to conclude from this that India grows more than enough food grains for its requirements is the height of folly. A country that in 2020 ranked 94th among 107 hunger-afflicted countries, according to the Global Hunger Index, cannot be said to be self-sufficient in food grains even if it has surplus stocks. This is not just an arbitrary judgment. Whenever the amount of purchasing power in the hands of the people has increased, stocks have tended to dwindle, which means that the stock buildup has been caused by a shortage of purchasing power in people’s hands rather than their having as much food as they want.

The solution to the stock buildup, therefore, is to put purchasing power in the hands of the people through transfers and through an enlargement in the scope of the Mahatma Gandhi National Rural Employment Guarantee Scheme. Ironically, doing so would not cost the government anything. If the government borrows say Rs 100 (a little more than a dollar) from banks to make these transfers, and if this amount that comes into the hands of the working people is spent on food grains, then it would come back to the FCI. The FCI, in turn, would repay this amount to the banks from whom it had borrowed for buying food grains from the kisans. As the FCI is part of the government itself, this means that what the right hand of the government would have borrowed from banks (for transfers), the left hand of the government would be paying back (through the FCI); there would be no net increase in the indebtedness of the government as a whole. But because the FCI, though government-owned, is off-budget (it was not till the early 1970s), there would be an increase in the fiscal deficit in the budget, which, however, is utterly inconsequential.

In other words, once the crop has been bought from the kisans, handing it to people rather than holding it as stocks will have no ill effects whatsoever; on the contrary, it is immensely beneficial for multiple reasons: it allays hunger, improves people’s living standards and reduces the cost of stockholding.

We assumed above that all the purchasing power coming into the hands of the people is spent on food grains, but even if a part of it is spent on other goods, it still remains entirely beneficial in a demand-constrained economy. True, the fiscal deficit will go up in this case in an authentic sense and not just spuriously as in the previous case, but this would have no ill effects whatsoever; on the contrary, it would provide a stimulus for economic recovery by increasing the degree of capacity utilization in non-food grain sectors.

But if instead of putting purchasing power into the hands of the people to lift food grain stocks, the land that is currently growing food grains is devoted to some other use, then that would amount to condemning the people forever to mass hunger. Since hunger is because of the lack of purchasing power with the people, a change in land use, from food grains to other uses, can reduce hunger only if the total employment generated directly and indirectly by such a shift is higher than before. Now, even if we assume that employment per acre is the same whether the acre is devoted to food grains or some other crop, such a shift in land use will not reduce hunger, as the purchasing power in the hands of the people will remain the same as before. So the panacea for reducing hunger is not a shift of acreage away from food grains but putting purchasing power in people’s hands. And as for the argument that kisans should move toward agro-processing, that is unexceptionable, but does not constitute an argument for reducing acreage under food grains.

There is, in fact, a very common misconception here. If an acre devoted to producing food grains fetches less income than the same acre devoted to some other crop, then a shift away from food grains is supposed to be beneficial. The misconception lies in the fact that it is not the income earned per acre that matters for society but how much employment is generated directly and indirectly through such a shift (assuming all along that food grains can be imported without any problems at the going prices, which itself is a completely false assumption in a world of imperialism). If the shift of an acre from food grains to some cash crop for export doubles the income for the landowning kisan but halves the employment generated on that acre, including what gets generated through multiplier effects, i.e., the expenditure of the higher incomes, then there would be a massive increase in destitution in the countryside. This will lead to the landowning kisans losing their higher income since the corporates who buy from them for exporting would bid down their purchase price because of the much greater destitution around. It is therefore not the apparent income gain but the employment effect of a shift of acreage that must be taken into consideration. (And even that is not enough because of imperialist arm-twisting of any country that becomes food-import-dependent.)

If the solution to stock accumulation lies in putting purchasing power in people’s hands, the solution to lack of profitability for kisans in food grain production lies in raising the MSP and the procurement prices for food grains. It would be argued of course that if the MSP and procurement prices are raised, then that would raise food prices for the consumers, but this is a non-sequitur. Procurement prices can be raised without raising issue prices through an increase in the food subsidy. And anyone objecting to such an increase in food subsidy on the grounds that there is a shortage of resources to meet the subsidy bill should remember that any redistribution in society, any attempt to improve income distribution, entails taxing some to subsidize others. Anyone who cries over the peasants’ meager income but is unwilling to advocate the use of fiscal means for rectifying it is being utterly dishonest, merely shedding crocodile tears for the peasants while actually carrying forward, unwittingly perhaps, an imperialist agenda. And all this is quite apart from the fact that what appears at first sight as the easy way to raise peasants’ income, through a shift toward more lucrative cash crops, can make them pauperized when the prices of these crops crash in the world market, as they inevitably would since they are subject to wide fluctuations (from which the MSP system protects peasants).

The peasants gathered on the Delhi border understand all these issues much more clearly than either Modi or the intelligentsia advocating a shift away from food grains. Ironically, it is the latter group who are suggesting that the peasants are ignoramuses!

Prabhat Patnaik is an Indian political economist and political commentator.

Anticopyright: Editorials and articles originated on TMS may be freely reprinted, disseminated, translated and used as background material, provided an acknowledgement and link to the source, TMS: Why Are People Going Hungry in India Despite a Massive Grain Surplus?, is included. Thank you.