The numbers reflect the latest data available as of Jan. 22 from the CDC’s Vaccine Adverse Event Reporting System website. Of the 329 reported deaths, 285 were from the U.S., and 44 were from other countries. The average age of those who died was 76.5.

29 Jan 2021 – As of Jan. 22, 329 deaths — a subset of 9,845 total adverse events — had been reported to the Centers for Disease Control and Prevention’s (CDC) Vaccine Adverse Event Reporting System (VAERS) following COVID-19 vaccinations. VAERS is the primary mechanism for reporting adverse vaccine reactions in the U.S. Reports submitted to VAERS require further investigation before confirmation can be made that an adverse event was linked to a vaccine. 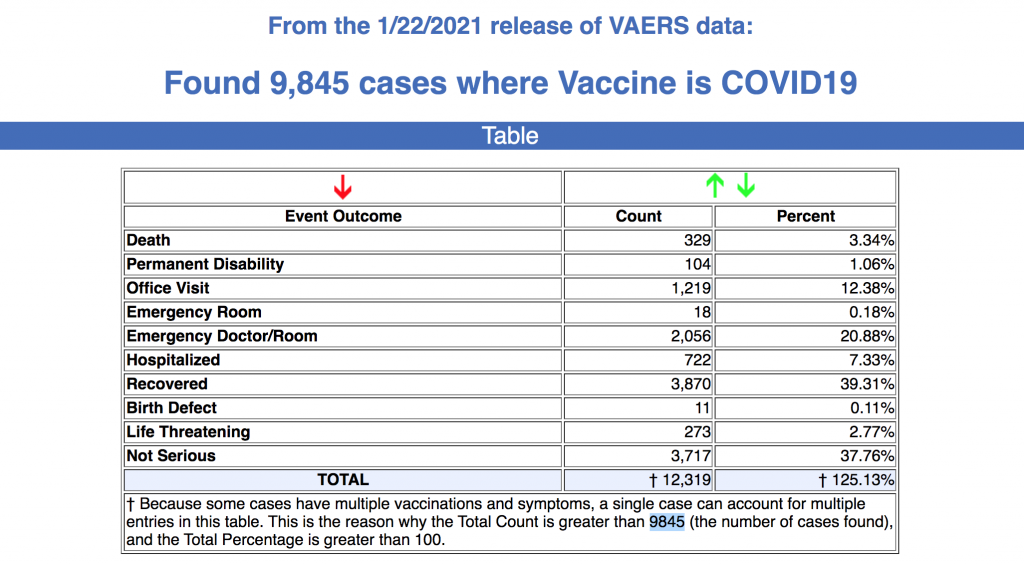 The reports, filed on the VAERS website between Dec. 14, 2020 and Jan. 22, describe outcomes ranging from “foaming at the mouth” to “massive heart attacks” to “did not recover.”

According to the Washington Post, as of Jan. 29, 22 million people in the U.S. had received one or both doses of a COVID vaccine. So far, only the Pfizer and Moderna vaccines have been granted Emergency Use Authorization in the U.S. by the U.S. Food and Drug Administration (FDA). By the FDA’s own definition, the vaccines are still considered experimental until fully licensed.

Even with the updated injury numbers released today, the CDC said Thursday that safety data shows “everything is going well.” According to USA TODAY:

“Early safety data from the first month of COVID-19 vaccination finds the shots are as safe as the studies suggested they’d be.

“Everyone who experienced an allergic response has been treated successfully, and no other serious problems have turned up among the first 22 million people vaccinated, according to the Centers for Disease Control and Prevention.”

States reporting the most deaths were: California (22), Florida (16), Ohio (18), New York (15) and KY (13). Most of the reports were from, or filed on behalf of people who had received only the first dose. About half of the people reporting had the Pfizer vaccine, the other half Moderna.

Several deaths and multiple severe allergic reactions are under investigation in the U.S. and Europe.

Last week, California health officials temporarily paused a large batch of Moderna vaccines due to a high number of allergic reactions, but reversed that decision a few days later.

Anyone suffering from a serious injury will have little legal recourse because they will be directed to the Countermeasures Injury Compensation Program which has rejected 90% of vaccine-injury claims over the past decade. 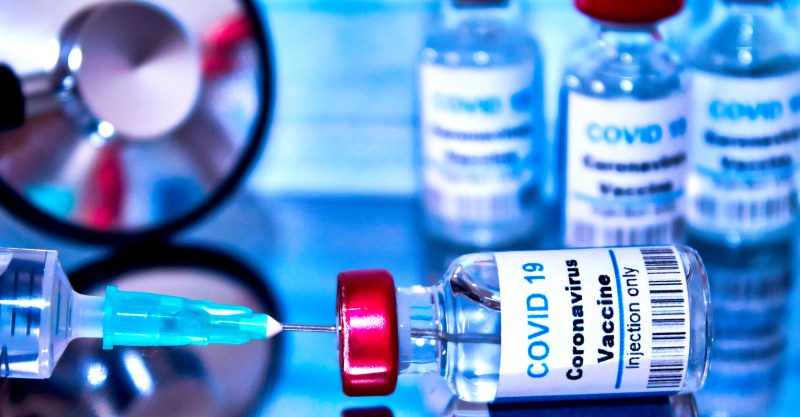 On Jan. 3, Miami obstetrician Dr. Gregory Michael died after he suffered a hemorrhagic stroke. Michael died about two weeks after receiving Pfizer-BioNtech’s COVID vaccine. Although he became ill just three days after he got the shot, Pfizer said it didn’t think there was any direct connection to the vaccine. The New York Times quoted Dr. Jerry Spivak, a blood disorder expert at Johns Hopkins University, saying “I think it’s a medical certainty that the vaccine was related.”

Officials in Orange County, California, are investigating the death of a 60-year-old healthcare worker who died Jan. 9, four days after receiving his second injection of the Pfizer-BioNTech COVID vaccine. Tim Zook, an x-ray technologist at South Coast Global Medical Center in Santa Ana, was hospitalized on Jan. 5, several hours after being vaccinated. Zook’s wife, Rochelle Zook, told the Orange County Register that her husband’s health rapidly deteriorated over the next few days. She said she didn’t blame any pharmaceutical company and that people should still “take the vaccine — but the officials need to do more research. We need to know the cause.”

Data about deaths following receipt of the experimental Pfizer-BioNTech vaccine are also emerging from Israel, Norway, Portugal, Sweden and Switzerland. Norway launched an investigation into the vaccines after the Norwegian Medicines Agency received reports of 33 suspected adverse drug reactions with fatal outcomes following administration of the Pfizer-BioNTech vaccine. Pharma and federal agencies attributed the majority of these cases to “coincidence.”

“Coincidence is turning out to be quite lethal to COVID vaccine recipients,” said Children’s Health Defense (CHD) Chairman Robert F. Kennedy, Jr. “If the clinical trials are good predictors, the rate of coincidence is likely to increase dramatically after the second shot.”

The clinical trials suggested that almost all the benefits of COVID vaccination and the vast majority of injuries were associated with the second dose.

While the VAERS database numbers are sobering, according to a U.S. Department of Health and Human Services study, the actual number of adverse events is likely significantly higher. VAERS is a passive surveillance system that relies on the willingness of individuals and professionals to submit reports voluntarily.

In December, CHD and Kennedy wrote to former FDA director, Dr. David  Kessler, co-chair of the COVID-19 Advisory Board and President Biden’s version of Operation Warp Speed. Kennedy told Kessler that VAERS has been an abject failure, with fewer than 1% of adverse events ever reported.

A critic familiar with VAERS’ shortcomings bluntly condemned VAERS in The BMJ as “nothing more than window dressing, and a part of U.S. authorities’ systematic effort to reassure/deceive us about vaccine safety.”

CHD is calling for complete transparency. The children’s health organization is asking Kessler and the federal government to release all of the data from the clinical trials and suspend COVID-19 vaccine use in any group not adequately represented in the clinical trials, including the elderly, frail and anyone with comorbidities.

CHD is also asking for full transparency in post-marketing data that reports all health outcomes, including new diagnoses of autoimmune disorders, adverse events and deaths from COVID vaccines.