A Regime of Jewish Supremacy from the Jordan River to the Sea: This Is Apartheid

12 Jan 2021 – More than 14 million people, roughly half of them Jews and the other half Palestinians, live between the Jordan River and the Mediterranean Sea under a single rule. The common perception in public, political, legal and media discourse is that two separate regimes operate side by side in this area, separated by the Green Line. One regime, inside the borders of the sovereign State of Israel, is a permanent democracy with a population of about nine million, all Israeli citizens. The other regime, in the territories Israel took over in 1967, whose final status is supposed to be determined in future negotiations, is a temporary military occupation imposed on some five million Palestinian subjects.

Over time, the distinction between the two regimes has grown divorced from reality. This state of affairs has existed for more than 50 years – twice as long as the State of Israel existed without it. Hundreds of thousands of Jewish settlers now reside in permanent settlements east of the Green Line, living as though they were west of it. East Jerusalem has been officially annexed to Israel’s sovereign territory, and the West Bank has been annexed in practice. Most importantly, the distinction obfuscates the fact that the entire area between the Mediterranean Sea and the Jordan River is organized under a single principle: advancing and cementing the supremacy of one group – Jews – over another – Palestinians. All this leads to the conclusion that these are not two parallel regimes that simply happen to uphold the same principle. There is one regime governing the entire area and the people living in it, based on a single organizing principle.

When B’Tselem was founded in 1989, we limited our mandate to the West Bank (including East Jerusalem) and the Gaza Strip, and refrained from addressing human rights inside the State of Israel established in 1948 or from taking a comprehensive approach to the entire area between the Jordan River and the Mediterranean Sea. Yet the situation has changed. The regime’s organizing principle has gained visibility in recent years, as evidenced by the Basic Law: Israel – the Nation State of the Jewish People passed in 2018, or open talk of formally annexing parts of the West Bank in 2020. Taken together with the facts described above, this means that what happens in the Occupied Territories can no longer be treated as separate from the reality in the entire area under Israel’s control. The terms we have used in recent years to describe the situation – such as “prolonged occupation” or a “one-state reality” – are no longer adequate. To continue effectively fighting human rights violations, it is essential to examine and define the regime that governs the entire area.

This paper analyzes how the Israeli regime works to advance its goals in the entire area under its control. We do not provide a historical review or an evaluation of the Palestinian and Jewish national movements, or of the former South Africa regime. While these are important questions, they are beyond the purview of a human rights organization. Rather, this document presents the principles that guide the regime, demonstrates how it implements them and points to the conclusion that emerges from all of this as to how the regime should be defined and what that means for human rights.

In the entire area between the Mediterranean Sea and the Jordan River, the Israeli regime implements laws, practices and state violence designed to cement the supremacy of one group – Jews – over another – Palestinians. A key method in pursuing this goal is engineering space differently for each group.

Jewish citizens live as though the entire area were a single space (excluding the Gaza Strip). The Green Line means next to nothing for them: whether they live west of it, within Israel’s sovereign territory, or east of it, in settlements not formally annexed to Israel, is irrelevant to their rights or status.

Where Palestinians live, on the other hand, is crucial. The Israeli regime has divided the area into several units that it defines and governs differently, according Palestinians different rights in each. This division is relevant to Palestinians only. The geographic space, which is contiguous for Jews, is a fragmented mosaic for Palestinians:

Israel accords Palestinians a different package of rights in every one of these units – all of which are inferior compared to the rights afforded to Jewish citizens. The goal of Jewish supremacy is advanced differently in every unit, and the resulting forms of injustice differ: the lived experience of Palestinians in blockaded Gaza is unlike that of Palestinian subjects in the West Bank, permanent residents in East Jerusalem or Palestinian citizens within sovereign Israeli territory. Yet these are variations on the fact that all Palestinians living under Israeli rule are treated as inferior in rights and status to Jews who live in the very same area.

Detailed below are four major methods the Israeli regime uses to advance Jewish supremacy. Two are implemented similarly throughout the entire area: restricting migration by non-Jews and taking over Palestinian land to build Jewish-only communities, while relegating Palestinians to small enclaves. The other two are implemented primarily in the Occupied Territories: draconian restrictions on the movement of non-citizen Palestinians and denial of their political rights. Control over these aspects of life lies entirely in Israel’s hands: in the entire area, Israel has sole power over the population registry, land allocation, voter rolls and the right (or denial thereof) to travel within, enter or exit any part of the area.

A. Immigration – for Jews only:

Any Jew in the world and his or her children, grandchildren and spouses are entitled to immigrate to Israel at any time and receive Israeli citizenship, with all of its associated rights. They receive this 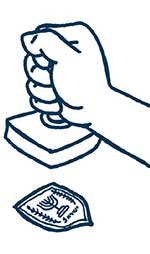 status even if they choose to live in a West Bank settlement not formally annexed to Israel’s sovereign territory.

In contrast, non-Jews have no right to legal status in Israeli-controlled areas. Granting status is at the almost complete discretion of officials – the Minister of the Interior (within sovereign Israel) or the military commander (in the Occupied Territories). Despite this official distinction, the organizing principle remains the same: Palestinians living in other countries cannot immigrate to the area between the Mediterranean Sea and the Jordan River, even if they, their parents or their grandparents were born and lived there. The only way Palestinians can immigrate to areas controlled by Israel is by marrying a Palestinian who already lives there – as citizen, resident or subject – as well as meeting a series of conditions and receiving Israeli approval..

Israel not only hampers Palestinian immigration but also impedes Palestinian relocation between the units, if the move – in the perception of the regime – would upgrade their status. For instance, Palestinian citizens of Israel or residents of East Jerusalem can easily relocate to the West Bank (although they risk their rights and status in doing so). Palestinians in the Occupied Territories cannot obtain Israeli citizenship and relocate to Israeli sovereign territory, except for in very rare instances, which depend on the approval of Israeli officials.

Israel’s policy on family unification illustrates this principle. For years, the regime has placed numerous obstacles before families in which each spouse lives in a different geographical unit. Over time, this has impeded and often prevented Palestinians marrying a Palestinian in another unit from acquiring status in that unit. As a result of this policy, tens of thousands of families have been unable to live together. When one spouse is a resident of the Gaza Strip , Israel allows the family to live there together, but if the other spouse is a resident of the West Bank, Israel demands they relocate permanently to Gaza. In 2003, the Knesset passed a Temporary Order (still in force) banning the issuance of Israeli citizenship or permanent residency to Palestinians from the Occupied Territories who marry Israelis – unlike citizens of other countries. In exceptional cases approved by the Minister of the Interior, Palestinians from the West Bank who marry Israelis may be granted status in Israel – yet it is only temporary and does not entitle them to social benefits.

Israel also undermines the right of Palestinians in the Occupied Territories – including East Jerusalem – to continue living where they were born. Since 1967, Israel has revoked the status of some 250,000 Palestinians in the West Bank (East Jerusalem included) and the Gaza Strip, in some cases on the grounds they had lived abroad for more than three years. This includes thousands of East Jerusalem residents who moved mere miles east of their homes to parts of the West Bank that are not officially annexed. All these individuals were robbed of the right to return to their homes and families, where they were born and raised.

One Response to “A Regime of Jewish Supremacy from the Jordan River to the Sea: This Is Apartheid”