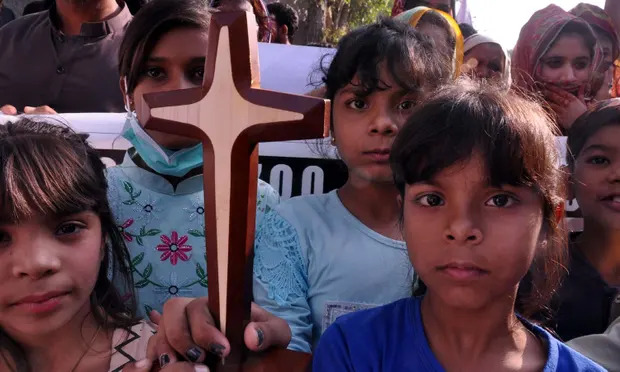 Girls from Pakistan’s Christian community protest after the kidnapping and forced conversion of a 13-year-old in Hyderabad last year.
Photograph: Newscom/Avalon

10 Feb 2021 – The family of a 12-year-old girl in Pakistan who was chained up in a cattle pen for more than six months, after allegedly being kidnapped and forced to marry her abductor, have attacked the authorities for refusing to act.

The case is among those now being examined by a government inquiry into the forced conversions of religious minority women and girls, after police released the man, saying they believed the girl had married him of her own free will.

The child was taken from her home in Faisalabad last June and had been held at the home of 29-year-old Khizer Hayat, where she was made to work clearing animal dung. Her family are angry that no further action has been taken against the man.

Police investigators initially held Hayat but then released him, saying there was no evidence the girl had not consented to the marriage and that a medical report said she was 16.

“The case has been taken up by the parliamentary committee of human rights in the Senate of Pakistan and police are attending the committee’s hearings. She confessed before the magistrate … that she married Khizer Hayat of her own free will and she wants to live with him,” said Musaddiq Riaz, a detective with Faisalabad police.

The father of the girl – who is not being named to protect her identity – told the Guardian that the police had discovered his daughter at a house in Hafizabad, 110km (68 miles) from her home.

“They repeatedly raped my daughter. She was in trauma after being subjected to physical and mental torture. They had forcibly converted her to Islam. She was kept as a slave and forced to work having a chain attached to her ankles. Police were not registering my complaint and threatened me [for] being a minority Christian and used discriminatory remarks,” he said.

“She was brought to the police station after negotiations with her abductors and she was bandaged at the police station,” he said. “She was traumatised and I still can’t believe she testified in favour of her kidnappers.”

He disputed the court report and showed his daughter’s birth certificate along with photographs of deep cuts and sores on her ankles. According to a 2019 report by the human rights commission of Pakistan, an estimated 1,000 Christian and Hindu women are abducted and forcibly married every year. Many of the victims are minors. Sexual assaults and fraudulent marriages are used by perpetrators to entrap victims, and authorities rarely intervene.

Pakistan’s tiny Christian population of about 2.5 million in the Muslim majority country of 223 million faces frequent discrimination. In 2020 a 14-year-old Catholic girl from Faisalabad was kidnapped at gunpoint and forced to “marry” her 45-year-old kidnapper. She managed to escape and is in hiding with her parents after a court ruled she must return to her abductor.

Lala Robin Daniel, an activist based in Faisalabad, said of the recent case: “Despite the parliamentary Senate committee for human rights hearings, I am not hopeful that justice will be served to the poor family. She was injured and in a state of trauma.

“Teenage girls from religious minority groups are often targeted for forced conversions and marriages due to certain gaps in the law and weak laws. Police and judiciary make fun of the parents seeking justice,” she said.

John Pontifex, of Catholic organisation Aid to the Church in Need, said the British government should be looking at the issue: “This case should sound a warning shot to the UK government, questioning the efficacy of its aid strategy, which for years prioritised funding to Pakistan. Given the institutionalised nature of abuse of young girls of minority faith backgrounds, we should in good conscience ask: is UK aid to Pakistan being used wisely? Is it aiding the girls or abetting the problem?”

He added: “We receive reports every week of incidents in which girls of minority faith backgrounds are abducted, gang-raped, forcibly converted and who are made to marry their abductor.

“And it seems the state is complicit by failing to investigate cases, failing to bring the perpetrators to justice and sanctioning child marriages.”

In December, Pakistan’s prime minister Imran Khan ordered an inquiry into the forced conversions of religious minority women and girls.

Tahir Mehmood Ashrafi, Khan’s special representative for religious harmony, said: “We are aware of the incident and the state of Pakistan is fully committed to ensure justice to minorities whether it’s forced marriage or forced conversion.

“We will not tolerate these acts. We will pursue the case, no one is above the law and we will take serious action against the culprits … We are working on the formulation of interfaith harmony councils at the local level to ensure minority protection and to resolve such cases promptly.”