UK-based security firm faces calls to repay charges made by recruitment agents for jobs in Gulf states and conflict zones. 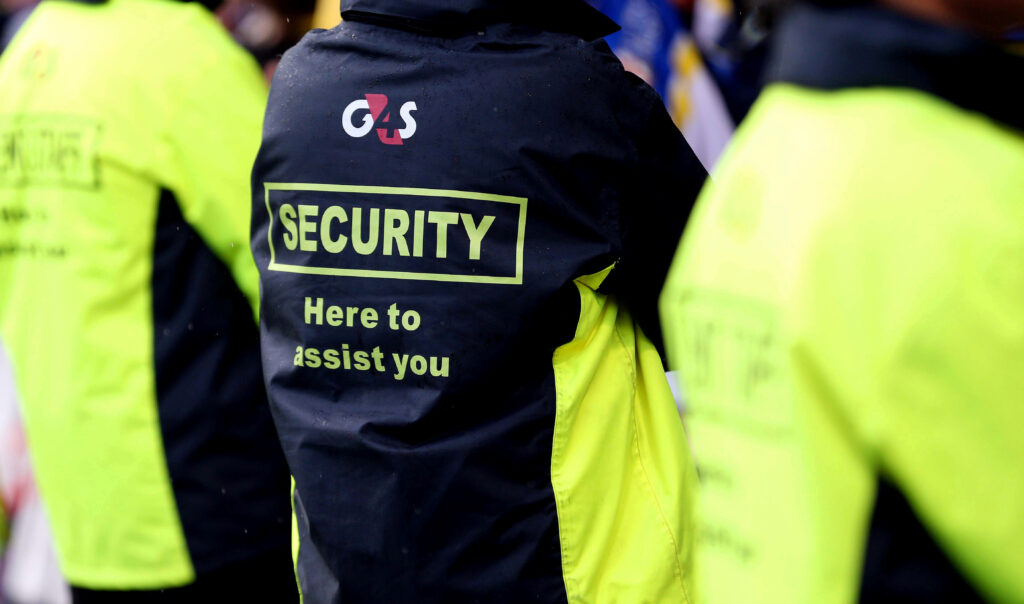 Potential G4S staff in the UAE, Iraq and Afghanistan are paying recruitment fees to independent agents to secure jobs.
Photograph: The Sun

18 Jan 2021 – Migrant workers working for the British security company G4S in the United Arab Emirates have collectively been forced to pay millions of pounds in illegal fees to recruitment agents to secure their jobs, the Guardian can reveal.

An investigation into G4S’s recruitment practices has found that workers from south Asia and east Africa have been made to pay up to £1,775 to recruitment agents working for the British company in order to get jobs as security guards for G4S in the UAE.

Forcing workers to pay recruitment fees is a widespread practice, but one that is illegal in the UAE, Qatar and Saudi Arabia. The practice allows companies to pass on the costs of recruitment to workers from some of the poorest countries in the world, leaving many deep in debt and vulnerable to modern forms of slavery, such as debt bondage.

Some south Asian countries allow agents to charge fees, but these are capped at a level far below the rate most G4S employees have paid.

Human rights groups have told the Guardian that G4S should repay the recruitment fees to its workforce in the UAE and across the Gulf. In 2019, G4S employed about 9,000 workers in the UAE and 30,000 workers across the region. Experts estimate remediation payments to current workers alone would probably run into tens of millions of pounds.

“Businesses must repay employees who have had to pay these illegal and exploitative costs in order to get their jobs. The costs of recruitment should be borne by the employer, not the worker,” said James Lynch, a director at FairSquare Projects, which advocates for migrant rights in the Gulf.

The findings come as G4S shareholders are considering a £3.8bn takeover bid from the US security firm Allied Universal.

The Guardian interviewed 28 workers from south Asia and east Africa working as G4S security guards and labourers in Dubai who had been employed by the company for between one and 12 years. Each said they had been forced to pay recruitment agents in their home countries. Security guards paid between the equivalent of between £485 and £1,775 to get their jobs. The average fee was £936.

Many workers said they had sold family land or borrowed money at high interest rates to afford the fees, leaving them burdened with debt.

The true costs of recruitment were significantly higher, as these figures may not include additional costs such as medical tests, or the interest paid on loans taken out to pay the recruitment fees.

“If you don’t pay, they will remove your name from the list. They will deselect you,” said Dipendra, a security guard from Nepal, who paid 130,000 Nepali rupees (£808) nine years ago. “It was huge amount back then. It took two years to pay back.”

G4S claims that since 2020, its migrant workers in the UAE no longer pay recruitment fees. “We have moved to an in-country, direct hiring model, which means that we rarely, if ever, use migrant worker recruitment agencies,” said G4S in a statement.

Hiring workers “directly” often involves recruiting migrants who have made their own way to the UAE in the hope of finding a job, meaning they continue to bear the major costs, debts and risks of recruitment.

Sarah, a security guard from Uganda, said that while looking for a job in Dubai she had to pay for accommodation, food, transport and two return flights. “I may have paid around 9,000 dirhams (£1,790) in total … At least I got a job. One is always better than zero,” she said.

The Guardian has seen a 2008 internal G4S report into the recruitment of Nepali workers for jobs as security guards in conflict zones in Iraq and Afghanistan, which states that, “potential recruits pay a significant sum to their local recruitment sources to be considered for … overseas contracts”.

In an interview with the Guardian in 2019, a G4S employee who oversaw the recruitment of guards in Nepal and India for conflict zones, said G4S did not charge any fees for recruitment but admitted that potential recruits might have to pay agents between £1,000 and £3,000.

“Lots of bribes happen. You really need a job, you’ve been told by a third party that you will get selected and you don’t want to miss the job so you give money,” he said.

A prospective recruit hoping to get posted to Afghanistan said he was told by an agent who directed candidates to G4S: “If you don’t give money, you won’t go.”

G4S plc is one of the world’s largest security companies, employing more than half a million people in around 85 countries. It is registered, and has its headquarters, in the UK.

In its guidelines for fair recruitment, the UN’s International Labour Organization states: “No recruitment fees or related costs should be charged to, or otherwise borne by, workers or jobseekers.”

Legal advice commissioned by the Good Law Project, a UK-based non-profit organisation, concluded that charging recruitment fees to migrant workers looking to secure jobs overseas was: “likely to be extortion by the recruitment companies which appear to be preying on the desperate”.

Although fees were paid to recruitment agents and not G4S directly, workers in Dubai described the close links between the two. They all said G4S staff interviewed them in person, and once selected, the agent demanded a fee for their services and related costs, such as air tickets.

Workers said that G4S was aware that they had to pay to be recruited but turned a blind eye to the practice. “I can say 100% that G4S knows the agency was charging us,” said Sunil, a security guard from Sri Lanka.

“It’s easy for G4S to find out. They just have to ask. Did you pay? Everybody will say, ‘Yes, we paid’ … it’s not rocket science,” said Lokesh, a Nepali guard.

They said G4S exploited the fact that workers are desperate for a job and unaware that they should not pay, in countries where paying for recruitment is the norm. “We cannot refuse to pay when everyone else is paying,” said Arjun, another guard from Nepal.

In November 2019, Norway’s Council on Ethics, which monitors investments for the Norwegian government pension fund, excluded G4S from its investments after the council advised that the firm’s recruitment practices contributed to “an unacceptable risk” that the company was contributing to “systematic human rights violations”.

A G4S spokesperson said: “G4S is committed to the highest standards to ensure that migrant workers are treated with respect and dignity. We are working to raise global standards across the industry with all our partners.”

G4S added that it had adopted an “employer pays” principle in the UAE and where it does use recruitment agents it selects them using a code of conduct, “which includes a strict requirement not to charge migrant workers any recruitment fees”.

Pete Pattisson is a video and photo journalist based in Kathmandu.