10 Nov 2022 – Report on conditions in Qatar alleges labour abuses are widespread and calls on FIFA to set up compensation fund.

‘We Have Fallen into a Trap’: Qatar’s World Cup Dream Is a Nightmare for Hotel Staff
Pete Pattisson | The Guardian - TRANSCEND Media Service, 6 Dec 2021

18 Nov 2021 – I spent weeks waiting at the Kathmandu Airport. Among the returning migrant workers were coffins bearing the bodies of young men who had paid the ultimate price in search of work overseas. They were being flown home from Qatar, host of the 2022 football World Cup. 18 Nov 2021 – With a Year to Go, the New Stadiums, Hotels and Roads Are Finished and Locals Are Excited, but the Low-Paid Workers Who Built Them Are Ambivalent 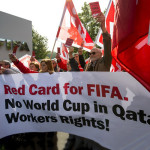 23 Feb 2021 – More than 6,500 migrant workers from India, Pakistan, Nepal, Bangladesh and Sri Lanka have died in Qatar since it won the right to host the World Cup 10 years ago. Hocking figure likely to be an underestimate, as preparations for 2022 tournament continue. 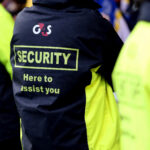 18 Jan 2021 – Migrant workers working for the British security company G4S in the UAE have collectively been forced to pay millions of pounds in illegal fees to recruitment agents to secure their jobs. Firm faces calls to repay charges for jobs in Gulf states and conflict zones.

Nepalese migrants building the infrastructure to the 2022 World Cup have died at a rate of one every two days in 2014 – despite Qatar’s promises to improve their working conditions. The figure excludes deaths of Indian, Sri Lankan and Bangladeshi workers, raising fears that fatalities would be more than one a day.

Monday 28 July 2014 – Migrant workers who built luxury offices used by Qatar’s 2022 football World Cup organisers have told the Guardian they have not been paid for more than a year and are now working illegally from cockroach-infested lodgings.

Modern-Day Slavery – Trapped in Qatar: The Migrants Who Helped Build the ‘Tower of Football’
Robert Booth, and Pete Pattisson in Doha – The Guardian, 4 Aug 2014

Despite World Cup host’s promises to improve life for foreign labourers, many still live desperate lives in the shadow of unimaginable riches.

At 16, Ganesh Got a Job in Qatar – Two Months Later He Was Dead
Pete Pattisson in Kathmandu and Doha – The Guardian, 30 Sep 2013

Nepalese workers go to Qatar to find a way out of poverty. Instead, many are trapped into 12-hour days and nights in overcrowded, filthy camps. Some never make it home alive.