‘We Have Fallen into a Trap’: Qatar’s World Cup Dream Is a Nightmare for Hotel Staff 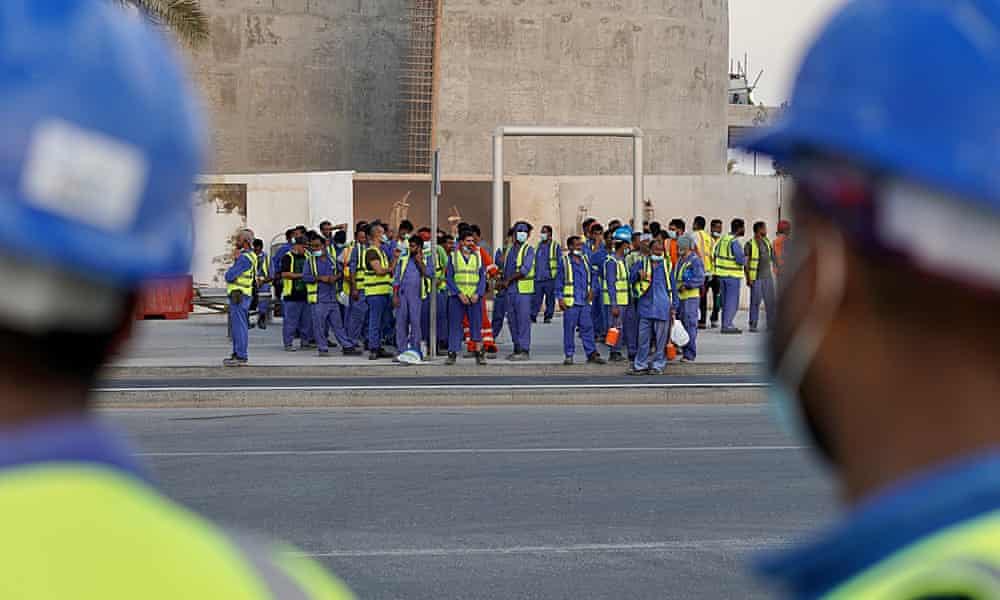 Workers leave the construction site of two luxury hotels that will open in time for the World Cup, by Pete Pattisson

In the summer of 2013, I spent weeks waiting outside the arrivals hall at Kathmandu’s airport.

As flights from the Gulf touched down, among the hundreds of returning migrant workers were coffins, bearing the bodies of young men who had paid the ultimate price in search of work overseas. Often these bodies were being flown home from Qatar, host of the 2022 football World Cup.

That experience set me on a reporting journey that has taken me from gut-wrenching scenes in remote Nepali villages, as families cremated loved ones, to labour camps on the outskirts of Doha, where I interviewed men packed 12 to a room, who told me about the low wages and long hours they endured, often in the Gulf’s intense summer heat. Over the years, as international criticism of Qatar’s treatment of migrant workers grew stronger, the country introduced sweeping labour reforms, applauded by several international bodies, including the UN.

Earlier this year I returned to Doha to see how things have changed, one year before the World Cup begins.

After I arrived, I drove north through Lusail, a district of gaudy and outrageous buildings, which will host the World Cup final. In 2014 I reported that one was being built by North Koreans employed in conditions likely to constitute forced labour, a modern form of slavery. It is now a luxury hotel.

When Fifa executives step on to the asphalt in Doha next November, their next stop is likely to one of Qatar’s glittering array of opulent hotels, built to provide the most luxurious possible backdrop to the biggest sporting event on earth. But behind the scenes at some of those hotels I found migrant hotel workers claiming that they are struggling to survive on wages of £1 an hour. For them, and other migrant workers I interviewed, Qatar’s labour reforms seem not to have translated into significant changes to their lives.

Sitting in a park in Doha, among a group of south Asian community activists who had all worked in Qatar for more than a decade, there was a sense that next year’s tournament wasn’t for them. “We built this country but they are not thinking about us workers,” said one. “How can we afford World Cup tickets on our salaries?” another added.

Seduced by Salary Promises, Workers at FIFA-Endorsed Hotels Allege They Have Been Exploited and Abused A security guard (not interviewed for this story) at a five star hotel near Doha seeks shelter from the heat. Photograph: Pete Pattisson

18 Nov 2021 – When Fifa executives step on to the asphalt in Doha next November for the start of the 2022 World Cup finals, their next stop is likely to be the check-in at one of Qatar’s glittering array of opulent hotels, built to provide the most luxurious possible backdrop to the biggest sporting event on earth.

Now, with a year to go before the first match, fans who want to emulate the lifestyle of the sporting elite can head to Fifa’s hospitality website to plan their stay in the host nation. There they can scroll through a catalogue of exclusive, Fifa-endorsed accommodation, from boutique hotels to five-star resorts.

Yet behind the scenes of some of those hotels, while guests lounge around the pool or sip cocktails at the bar, migrant hotel workers claim they are struggling to survive on wages of £1 an hour.

The Guardian stayed at or visited seven of the hotels listed on Fifa’s hospitality website and in interviews and conversations with more than 40 workers – employed directly and through sub-contractors – uncovered a number of allegations of serious labour rights violations and low wages. The hotels have not been named to protect the identity of the workers who spoke to the Guardian.

Many workers alleged they worked extremely long hours, with some saying they had not had a day off for months. While they spent their days surrounded by the most luxurious of settings, some workers said they were housed in overcrowded rooms in stifling labour camps. A few workers claimed their passports had been confiscated. Many said their employer would not let them change jobs.

While rooms in the hotels listed on Fifa’s hospitality site are charged at up to £820 a night when bought as part of a package, almost every worker the Guardian spoke to employed in housekeeping, security, valet service, cleaning or gardening said they earned less than £1.25 an hour. Many were working for less than £1 an hour.

Workers made multiple allegations of breaches of Qatar’s labour law, which suggest shortcomings in Qatar’s labour reforms. These promised an end to abusive working conditions and the kafala sponsorship system that meant workers could not change jobs or leave the country without their employer’s consent.

The workers’ allegations also imply that Fifa has failed to effectively carry out basic checks on the hotels investigated by the Guardian that it had signed up to its catalogue, in breach of its own human rights policy, which requires it to prevent labour abuses linked to its operations.

While most workers the Guardian spoke to received salaries in line with the new minimum wage, which came into force in March 2021, that wage still equates to only £1 an hour plus a small allowance for food and board.

The Guardian has also seen payslips from one worker employed directly by a hotel in Fifa’s catalogue, which show that when the minimum wage was introduced his basic wage of 750 rials (£150) rose to 1,000 rials (£200) a month, but allowances for food or transport, for example, were cut by the same amount, meaning his salary stayed the same.

“Sometimes I ask myself why I came here,” he said. “The World Cup is a big thing and everyone enjoys it, but the way they treat us … we are all tired of it.”

As darkness fell on one of the properties in Fifa’s brochure, guests retired indoors, leaving David*, a migrant worker from Africa, labouring near the swimming pool.

A night in a standard room in the hotel costs more than David earns in a month. He is desperate to change jobs but despite recent government legislation allowing this, he sayssaid he is trapped. “My friends have tried to change jobs but our company refuses to let them go,” he said. “We have to accept it. Our boss does whatever he wants.”

My friends have tried to change jobs but our company refuses to let them go … Our boss does whatever he wants.  — David, hotel worker

The hotel boasts sumptuous suites and a marble-lined lobby, but his own lodgings are starkly different: a small room shared with five others in a run-down compound on the edge of Doha.

Ranjit, a security guard, stood on duty nearby, as he had done for the previous 11 hours. Ranjit’s salary works out at about 80p an hour. Yet for five months he kept nothing; everything went towards paying off the illegal £1,300 fee he was forced to hand a recruitment agent back home to secure the job. “It’s a scam,” he said. “Here they suck your blood.”

Some workers across the seven hotels said they were happy with their jobs and the staff accommodation provided by their hotels. Yet the majority said they felt trapped between the demands of their employers and the need to earn money for their families back in their own countries.

At one hotel, a worker alleged that the management would only give bonuses to staff who handed over their passports. It is illegal for employers to keep workers’ passports in Qatar.

“We have fallen into a trap and can’t get out,” said another worker at the hotel.

With 1.2 million fans expected during the World Cup, the hospitality sector can look forward to a lucrative tournament.

A few hotels demonstrated good practice by recruiting their staff directly through online adverts, rather than through labour agents who often extract extortionate and illegal fees from recruits, but even in these properties the Guardian spoke to staff who were paid very low wages. A glittering array of new buildings have been built to accommodate the World Cup tournament. Photograph: Pete Pattisson

The worst allegations of abuse were by workers employed through sub-contractors, in particular hotel security guards and gardeners.

At another hotel on Fifa’s website a Kenyan security guard was about to begin his 12-hour shift, which he said stretched beyond 15 hours when he added travel time to and from his labour camp.

If he works all month without a break he earns 2,000 rials (£400); far less than he was promised when he signed up for the job in Kenya. If he took a day off, his employer would cut his wages by 50 rials (£10). Not that he often had that option. “During the summer we had to work for three months without a day off,” he said.

His passport has been confiscated by his company. “Maybe they think if you have your passport you can run away to another company,” he said. “We have no other option, so we take what is on the table.”

The Guardian’s findings have shone a spotlight directly on world football’s governing body, which has been criticised by Amnesty International for taking a “hands-off” approach to workers’ rights in the host nation. A spokesperson for Fifa said it “takes any claim concerning the rights of workers contributing to the hosting of Fifa events very seriously”.

The spokesperson said a dedicated team was implementing an audit and compliance system for companies involved in the delivery of the World Cup, including hotels, to ensure workers’ rights were respected. “While there is a need for continued improvement, we have already seen important progress by many hotels in Qatar in recent months,” the spokesperson added.

Isobel Archer, a specialist in labour rights in the Gulf at the Business & Human Rights Resource Centre (BHRRC), a charity headquartered in London, said hotels must recognise their responsibilities to all workers, including those employed through sub-contractors.

“If hotel brands put even half the effort into scrutinising their suppliers’ labour practices as they do the height of their reception desks or the density of guest room pillows, we’d see transformational change for hotel workers,” she said.

A report by the BHRRC this year also found evidence of widespread exploitation of hotel workers in Qatar which, it said, should be a “red flag” for football teams, fans and corporate sponsors.

A Qatari official said the government “takes any violation of its labour laws very seriously, including those in the hospitality sector”. The official said Qatar had a zero-tolerance approach towards violating companies, issuing harsh penalties that included fines and prison sentences.

“Awareness-raising initiatives have been launched to provide workers with information on how to raise complaints against their employer, and new mechanisms have been introduced to facilitate better access to justice,” the official added.

*Names have been changed or omitted to protect workers’ identities.

Pete Pattisson is a video and photo journalist based in Kathmandu