Revealed: 6,500 Migrant Workers Have Died in Qatar as It Gears Up for Soccer World Cup

Hocking Figure Likely to Be an Underestimate, as Preparations for 2022 Tournament Continue

23 Feb 2021 – More than 6,500 migrant workers from India, Pakistan, Nepal, Bangladesh and Sri Lanka have died in Qatar since it won the right to host the Soccer World Cup 10 years ago, the Guardian can reveal.

The findings, compiled from government sources, mean an average of 12 migrant workers from these five south Asian nations have died each week since the night in December 2010 when the streets of Doha were filled with ecstatic crowds celebrating Qatar’s victory.

Data from India, Bangladesh, Nepal and Sri Lanka revealed there were 5,927 deaths of migrant workers in the period 2011–2020. Separately, data from Pakistan’s embassy in Qatar reported a further 824 deaths of Pakistani workers, between 2010 and 2020. 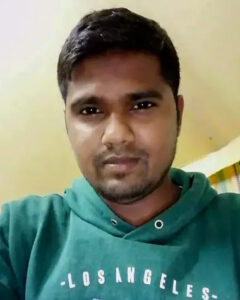 Mohammad Shahid Miah, 29, from Bangladesh, died when floodwater in his room came into contact with an exposed electric cable, electrocuting him.

The total death toll is significantly higher, as these figures do not include deaths from a number of countries which send large numbers of workers to Qatar, including the Philippines and Kenya. Deaths that occurred in the final months of 2020 are also not included.

In the past 10 years, Qatar has embarked on an unprecedented building programme, largely in preparation for the football tournament in 2022. In addition to seven new stadiums, dozens of major projects have been completed or are under way, including a new airport, roads, public transport systems, hotels and a new city, which will host the World Cup final.

While death records are not categorised by occupation or place of work, it is likely many workers who have died were employed on these World Cup infrastructure projects, says Nick McGeehan, a director at FairSquare Projects, an advocacy group specialising in labour rights in the Gulf. “A very significant proportion of the migrant workers who have died since 2011 were only in the country because Qatar won the right to host the World Cup,” he said.

There have been 37 deaths among workers directly linked to construction of World Cup stadiums, of which 34 are classified as “non-work related” by the event’s organising committee. Experts have questioned the use of the term because in some cases it has been used to describe deaths which have occurred on the job, including a number of workers who have collapsed and died on stadium construction sites.

The findings expose Qatar’s failure to protect its 2 million-strong migrant workforce, or even investigate the causes of the apparently high rate of death among the largely young workers. 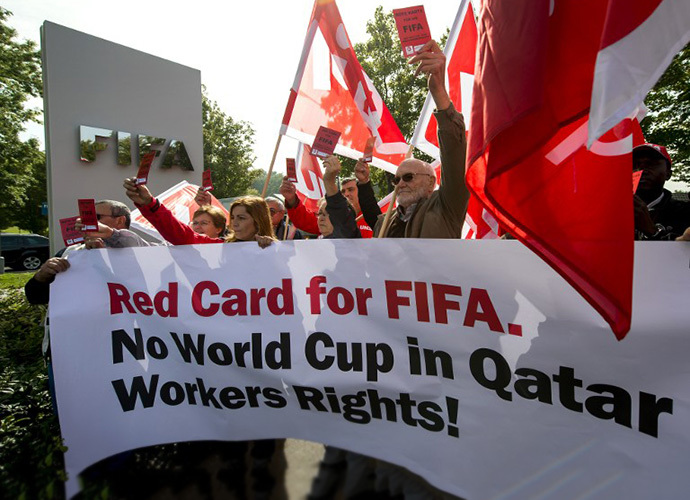 Members of Building and Wood Workers’ International (BWI) and Swiss Unia unions hold a red cards reading “A red card for FIFA, no World Cup without labour rights” and a banner reading “No World Cup in Qatar Workers Rights!” during a demonstration outside the headquarters of the world’s football governing body FIFA in Zurich on October 3, 2013. (AFP Photo/Fabrice Coffrini)

Behind the statistics lie countless stories of devastated families who have been left without their main breadwinner, struggling to gain compensation and confused about the circumstances of their loved one’s death.

Ghal Singh Rai from Nepal paid nearly £1,000 in recruitment fees for his job as a cleaner in a camp for workers building the Education City World Cup stadium. Within a week of arriving, he killed himself.

Another worker, Mohammad Shahid Miah, from Bangladesh, was electrocuted in his worker accommodation after water came into contact with exposed electricity cables.

In India, the family of Madhu Bollapally have never understood how the healthy 43-year old died of “natural causes” while working in Qatar. His body was found lying on his dorm room floor.

Qatar’s grim death toll is revealed in long spreadsheets of official data listing the causes of death: multiple blunt injuries due to a fall from height; asphyxia due to hanging; undetermined cause of death due to decomposition.

But among the causes, the most common by far is so-called “natural deaths”, often attributed to acute heart or respiratory failure. 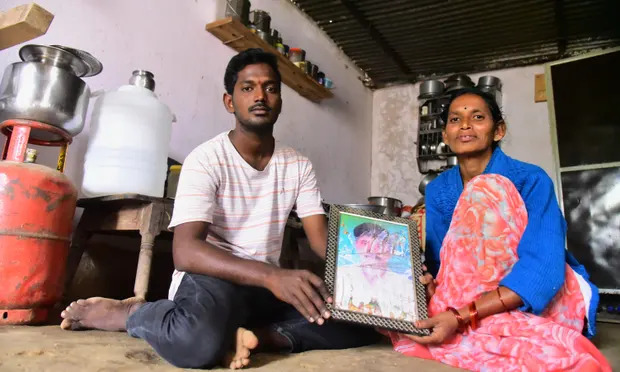 Latha Bollapally, with her son Rajesh Goud, holds a picture of her husband, Madhu Bollapally, 43, a migrant worker who died in Qatar. Photograph: Kailash Nirmal

Based on the data obtained by the Guardian, 69% of deaths among Indian, Nepali and Bangladeshi workers are categorised as natural. Among Indians alone, the figure is 80%.

The Guardian has previously reported that such classifications, which are usually made without an autopsy, often fail to provide a legitimate medical explanation for the underlying cause of these deaths.

In 2019 it found that Qatar’s intense summer heat is likely to be a significant factor in many worker deaths. The Guardian’s findings were supported by research commissioned by the UN’s International Labour Organization which revealed that for at least four months of the year workers faced significant heat stress when working outside.