How Do You Say Ku Klux Klan in Hebrew?

Those subjected to Israel’s occupation have been abandoned to the occupiers’ cruelty, as a result of the weakness of the country’s army, law enforcement and security establishment. 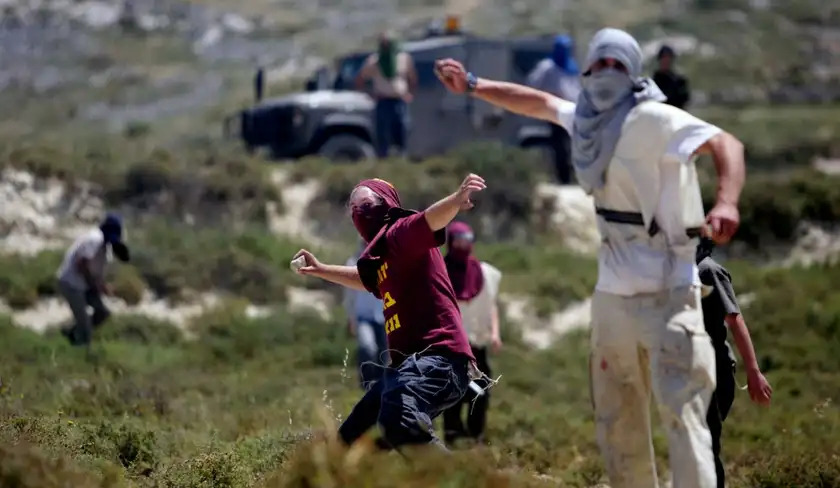 Israeli settlers throwing rocks at Palestinians near the settlement of Yitzhar, in the West Bank, in 2013. (The subjects have no connection to the content of the article.)
Credit: AP

1 Feb 2021 – The Jewish militias generally attack at night. In the grand tradition of racist pogroms, when night falls, gangs of masked settlers descend on the roads and villages of the West Bank in search of the boys and girls of the despised race. Their members block roads to perform “selections” and identify cars with Palestinian license plates so they can attack the passengers. They storm homes, shatter windows and set fires.

This has been going on every night for more than a month, because the friends of Ahuvia Sandak – a so-called hilltop youth who was regrettably killed while being pursued by the Israel Police – decided that the Palestinians must pay for his death. The human rights organization Yesh Din (for which I am legal adviser) has so far documented 47 different nighttime attacks in recent weeks that have caused considerable property damage and injured at least 14 people. Hundreds of rioters, few arrests. Recently an 11-year-old girl was wounded in the head in her village, Madama, and rocks were thrown at the face of a 5-year-old boy on Highway 60.

The security establishment does not provide effective protection, Israeli TV stations barely report it, and most Israelis are simply apathetic

The Yesh Din WhatsApp group, of which I am a member, starts buzzing every evening at around 7 or 8 P.M., with preliminary reports from the organization’s field researchers, followed 30 to 60 minutes later by a stream of video clips and photos. Another family whose windows were smashed during dinner, another Palestinian driver nearly killed on the road, another car torched by rioters, more traffic jams keeping laborers from getting home after a day’s work.

At the same time that settler violence begins to surge, the nightly news broadcasts begin. But Israeli news outlets don’t send their crews to Palestinian villages, or even to Highway 60, the West Bank’s major artery. When the newscasters report on the rioting by the battalions of Jewish supremacists (and most don’t), they do so very briefly, unless the rioters attack policemen or overturn patrol cars. That’s also when there will be mass arrests. As long as the victims are non-Jews, so long as the homes being stormed don’t have a mezuzah on the doorpost, the news flash will have a hard time morphing into a full-fledged report.

But the information is available to anyone who’s interested: In the social media accounts of human rights organizations or on “leftist” news sites, including that of this newspaper, one can view frightening video footage of Palestinian passengers getting hit by rocks that break their windshields as they drive. One can see photos of homes after the Jewish gangs storm them, with glass shards scattered in the kitchen and bedrooms, and the bloody footprints of those wounded staining the floor. One can also find images of wounded children, of a girl whose nose is bleeding and swollen, of a little boy barely in kindergarten crying in a Red Crescent ambulance, his toddler’s face damaged and bleeding where he was hit by a stone.

And even though I make every effort to banish these thoughts from my head, the images of these children and their parents summon other images. The terrified look in the eyes of those who have nowhere to run and probably no one to protect them, remind me of pictures from other places and times. Pictures of Jews. Other Jews. Pictures of the broken windows of Jewish homes and stores. The very thought that the descendants of those persecuted in those times have crossed to the other side of the rock and the shattered window – that thought is blood-curdling.

It would behoove everyone to figure out whether the so-called strongest army in the Middle East isn’t capable of or isn’t really trying to stop this Hebrew Ku Klux Klan. At the end of the day, it’s clear that those subjected to the Israeli occupation have been abandoned to the occupiers’ cruelty, as a result of the weakness of the army and law enforcement authorities. The facts on the ground show that the security establishment does not provide effective protection, that Israeli TV stations barely report that, and that most Israelis – who do not participate in these attacks and probably even oppose them – are simply apathetic.

The right is going to win the next election. Public opinion polls give the impression that from a political perspective, this is an election for the Council of Judea and Samaria’s house committee. The media focuses on the internal differences regarding the attitude toward Prime Minister Benjamin Netanyahu, but beyond this dispute about a specific person (which is undoubtedly important and has real consequences) – truth must be told: When it comes to the Israeli-Palestinian conflict, the colonialist right has created a network of parties that are ideological clones.

This is a brilliant move. Like a monopoly that sets up subsidiaries masquerading as competitors, that take the money of consumers fed up with the leading brand. Alas, the money ends up in the same pocket. The pocket that rattles with the perpetuation of the occupation, denying rights to the occupied, advancing annexation and apartheid. It’s no wonder that none of the leaders of the “alternative” parties has rent their garments or donned sackcloth and ashes at the sight of fellow Jews brutally storming helpless occupied people. Gideon Sa’ar, Naftali Bennett, Avigdor Lieberman (there’s no point in even mentioning Bezalel Smotrich, who once called on his rabble to block roads to Palestinians) – don’t you dare say later that “our hands have not spilled this blood.”