I Am a Jew and I Want Palestinians Heard in Court

8 Feb 2021 – I am not Palestinian but I was a witness to the assault of 2014. I want its alleged war crimes to be prosecuted by the International Criminal Court. Those warriors who were ‘brave’ enough to direct an assault on a trapped populace should be brave enough to account for their choices in a well-lit courtroom.

Why is a court of law important?

Because the menace that underpinned the assault of 2014 is still present: the dehumanization of Palestinians. Walled off and vilified, anything can be done to the people of Gaza. A trial will amplify their story of being under intensive attack behind a wall. Let Gazans tell their story.

Because people will still be living with the memory and the imprint of this war. The body remembers the singed smells that linger on your skin, the sight behind your eyelids of neighbors racing toward rubble to rescue neighbors, the sound of children with chattering teeth. The drifts of white dust in the corners of window sills. The screams of people in the streets, seeking shelter before nightfall – but there is no shelter behind a wall.

Because courts prosecute individuals, not nations. Individuals make choices and are accountable. Individual responsibility lets everyone else get beyond blaming whole states. Someone wrote the doctrines, chose the weapons and the targeting parameters and the order of battle. They should be judged for their handiwork.

Because of the 18,000 homes destroyed, the 100 family homes targeted in the first week, and the millions of tons of rubble that altered the very landscape of the Gaza Strip. In 51 days, Gazan forces fired roughly 6000 rockets and artillery shells while Israel’s armed forces acknowledge dispatching 5000 tons of munitions to fire at a trapped populace. The tonnage and the stated doctrines of disproportionate force like the Dahiya Doctrine await judgment.

Because someone knew that the UN shelter-schools were filled with displaced Palestinians. They knew, because I told them. As a member of the UNRWA team operating those shelters, one of my tasks was to confirm the pre-existing protections of each flagged United Nations school building that was sheltering displaced people. Over and over they were told. Those schools were clearly marked on military maps. Everyone knows their location and their signature colors. Someone in Israel knew and fired at them anyway. Seven times they fired, killing 44 Palestinians and injuring 227. Let those people explain their actions to a judge. 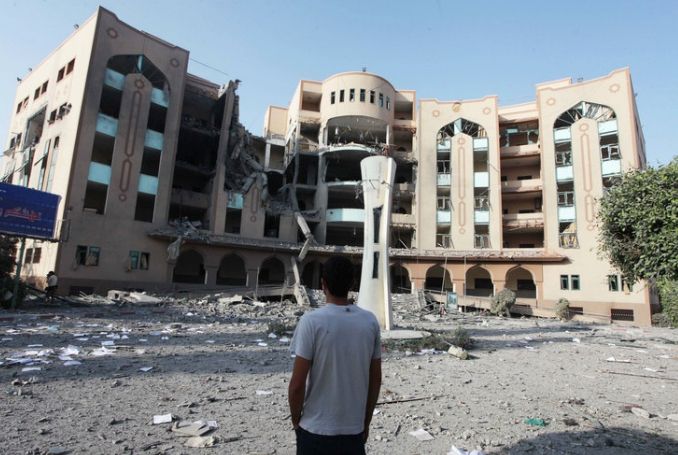 The Islamic University of Gaza bombed by Israel in 2014. (Photo: File)

Because the earth trembled with the tonnage of bombs that the IDF used to destroy the homes of 92,000 Palestinians in Shuja’iyya, and because of the quieter killings in Khuza’a. The stories of Gaza’s neighborhoods need to be heard and responsibility assigned.

Because of the 73 medical facilities, the ambulances, and every other illegal target. Because of the civilian infrastructure destroyed, the water pipes and the power plant, and all the gratuitous hardship that Gazans endured. The lesson of the war, they said later, was that Israel no longer saw any civilians in Gaza at all. A court must restore Gazans’ civilian status and protections.

Because of the 293,000 displaced Gazans who endured such trying conditions in 90 UNRWA shelters – because there was no safer place behind that wall.

Because 6,000 airstrikes and 14,500 tank shells and 35,000 artillery shells equate to 100,000 kg of explosives every day, day after day. Israeli forces killed 2251 Gazans including 1,462 civilians, a third of whom were children. The human consequence of the IDF’s choice to inflict such massive violence must be heard. Battlefield explosive weapons must not rain down upon crowded cities with impunity again.

Because beneath those bombs in Gaza, the minutes were interminable. There was nowhere to flee, no way to help, nothing to do but wait for the next bomb through nights when there were more bombs than minutes. Let a trial record and weigh the harm of those 51 merciless days and nights of minutes of witness.

Because some debased Israelis sat on hillsides eating popcorn. They watched the bombs land on human beings and homes as if it were entertainment. Around the world, many, many others turned away and did nothing. Perhaps both sets of people will be shaken to realize that they were enjoying, or averting their eyes from, a crime.

Because what is demonstrated in Gaza with impunity today, is normalized elsewhere tomorrow at the expense of other inconvenient human beings. The assaults upon Gaza are relevant even here, because New Zealand is buying military robots that were tested on the trapped people of Gaza and the West Bank. Is this who we aspire to be?

Because as a Jew, I have heard the rationales for that massive violence. “It’s necessary.” “Kill all the little snakes.” “This time we’ll finish the job.” Now I want to hear the evidence and the verdict on this ethno-nationalist project of ours.

Our world must not value human life so differently when the life is Palestinian. Because our lives are of equal value, Gazans must be heard in court.

Marilyn Garson lived and worked in Gaza 2011-2015. She is the author of Still Lives – a Memoir of Gaza, and a co-founder of the GGateway social enterprise. She is also a founding member of Alternative Jewish Voices of New Zealand. AJV is a non-Zionist collective that exists to demonstrate the real breadth of the Jewish community. This article was originally published on the website of Alternative Jewish Voices and was contributed to The Palestine Chronicle by the author.