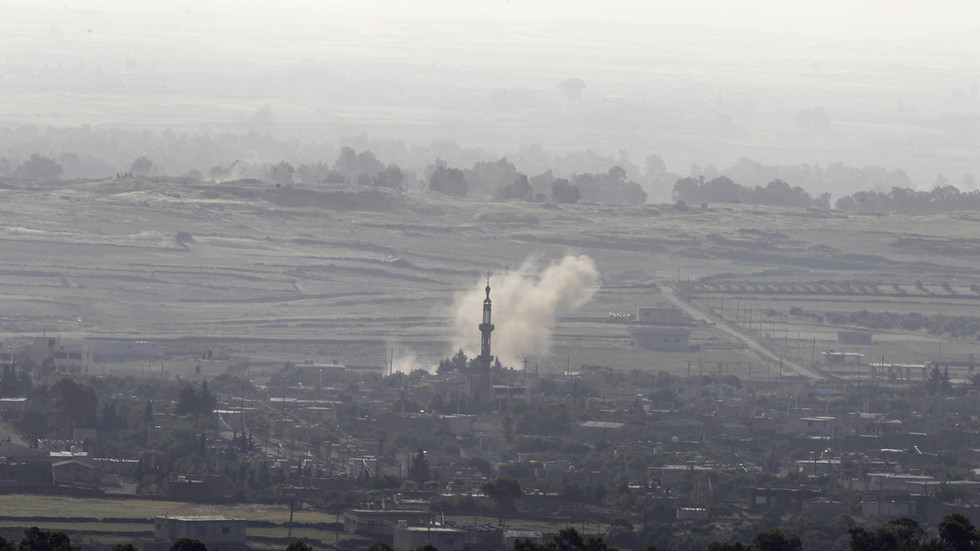 FILE PHOTO: Smoke rises after shells exploded in the Syrian village of Al Rafeed, close to the ceasefire line between Israel and Syria, as seen from the Israeli occupied Golan Heights May 7, 2013.
© REUTERS/Baz Ratner

Israel’s military chief of staff boasted earlier about hitting over 500 targets in just 2020 alone. Bearing in mind that Syria’s air defenses do intercept Israeli missiles, it is clear that Israel attacked Syria exponentially more than 500 times last year, and an untold number of times more in the many years that Israel has been bombing Syria.

This latest assault on Syria comes after an Iranian official clarified any Iranian forces in Syria are there at the invitation of the Syrian government to fight terrorists in Syria. This of course applies to all of Syria’s allies, but not to the illegal US and Turkish occupation forces.

Yet, one of the many ironies regarding reporting on Syria is that while Syria and her allies fighting terrorism there are routinely lambasted by Israeli and Western officials, both Israel and Western nations have long been supporting terrorists in Syria, claiming they are “opposition forces” although they are either part of Al-Qaeda in Syria, closely aligned to them, or members of equally brutal factions, including even Islamic State ( IS, formerly ISIS).

If Israel’s routine bombings of Syria are reported in Western media at all, it is with the usual downplaying of (and normalizing of) Israel’s violations of international law.

A SANA (Syrian Arab News Agency) report on the February 15 bombings read as most reports prior over the years, noting the Israeli aggression and that Syria’s “air defenses intercepted the missiles and downed most of them.”

Reuters’ account, referring to the SANA report, put Israeli aggression in quotation marks, as though the bombings don’t amount to an aggression. Perhaps Reuters views them as late Valentine’s greetings…Google “Iranian” or “Russian aggression” and see how often quotation marks are used.

Did Reuters or similar media bother to speak with civilians terrorized by these and the many prior Israeli assaults on Syria? Would they ever mention the psychological component of bombing at night, which is inevitably when Israel usually bombs?

Unlikely. Their narrative is to establish that “Iranian militias” are overtaking Syria and pose a threat to Israel that justifies Israel’s incessant bombings of Syria.

Who do Israel’s bombs target besides “Iranian/Iranian-backed militias”?

If Western media reported honestly on Israeli bombings of Syria, they would be forced to acknowledge not only that Syrian civilians, including children, have been killed in the bombings, but perhaps offer a human face. Given the frequency of Israeli attacks and disregard for civilians, it is likely that the number of civilians maimed or killed by such bombings is not low.

Even in media traditionally hostile to Syria, one can find reports of civilians killed by Israeli bombings in Syria.

Western media do periodically mention that civilians were killed, but always usurp that point with justifications, like Israel, “periodically attacks what it says are threats to Israeli security in Syria.”

In June 2019, I travelled to Quneitra, southern Syria. Standing near al-Baath City, with around 2,000 civilians living there, and around 4km from the occupiedSyrian Golan Heights, security there spoke of Israeli attacks in previous years and also just roughly two weeks before my visit.

While their emphasis was on the fact that every time Israel attacked it enabled terrorists (al-Nusra and other groups) to advance, the other take away was that the bombings took place next to or where civilians were living.

In July 2019, among the routine Israeli bombings of Syria was an attack that killed at least four civilians, including an infant, injuring many more. A France 24 mention of the bombings reported six civilians killed, including three children. The report was careful to also specify “pro-regime” for fighters killed, weighted lexicon so common in Western media.

Of that day’s attacks, the BBC ran with: “Israeli jets ‘hit Iranian targets in Homs and Damascus’’. The BBC justified, as the BBC does, Israel’s bombings with: “It periodically attacks what it says are threats to Israeli security in Syria.” Were the dead civilians Israelis, you can bet they would have made the BBC’s headline and not be buried in a justification.

More recently, on the morning of January 22, 2021, Israel (violating Lebanese airspace) bombed Tartous, Hama and Homs countryside. The bombings resulted in the deaths of at least five in one suburb.

Writing from Beirut and Gaza, AP cited the highly partial Syrian Observatory For Human Rights, who from their position afar in the UK attributed the cause of deaths to a Syrian air defense missile. The media ran with that.

And although the big corporate media networks have abundant “unnamed sources,” “citizen journalists” and other credible anonymous sources to support claims of Russian or Syrian atrocities, when it comes to attacks by Israel or the US or allies, these networks run strangely dry of sources and dry of empathy for the victims.

So it is that we never hear of the personal tragedies that come with such bombings.

Regarding the January 22 bombings, journalist Vanessa Beeley went to Kazu, Hama, which she wrote, “took a direct hit with four rockets landing in a narrow residential street.” Beeley reported on how five members of an internally displaced family from Idlib were killed in their sleep (one later dying of her injuries). And sharing horrifying nuances you will not find in Western corporate media, she wrote:

“Hossam was the first on the scene and to see the broken bodies, crushed by the debris of the blast. He told me that he later found the mobile phone of the daughter visiting from Tartous. Her husband had heard news of the attack and had been trying to call her, unaware that his wife had been killed alongside their daughter. Hossam told me that one family member had been sleeping when the shrapnel sliced into their face, tearing skin from bone…”

Now just imagine these were Syrian bombings killing Israeli civilians and children. There would be hell to pay, and the media would scream about it 24/7.

Because some lives matter, but most do not, when it comes to reporting on Syria.

I asked Beeley about the SOHR claims. She replied:

“All survivors of the attack that I interviewed were adamant that four Israeli rockets targeted the narrow residential streets, killing five members of one family and grievously injuring four other relatives living in the same house.”

Why does this hypocrisy matter?

Perhaps people far from the war in Syria and inundated with other terrible information and news wonder why I’m harping on about something that has happened a million times (figuratively) before, Israeli bombings of Syria. Yes, it isn’t news, yes it happens routinely. But it shouldn’t. That’s the bottom line. And it wouldn’t be accepted were a Western nation the target.

These are beyond hypocritical times, when repeatedly bombing a sovereign nation, killing civilians in doing so, merits no outrage, much less any UN or other actions against the offender.

But fighting designated terrorists in Syria warrants media indignation, accusations from Western politicians and the UN itself, and the cruel sanctioning of the people affected.

So why does the hypocrisy matter? Because every time Israel bombs Syria, it is either killing civilians, enabling terrorism (which kills civilians), or preventing the forces fighting terrorism from doing so.

And because Syrians aren’t just numbers behind headlines about “Iranian-backed” fighters. They are people long-abused by Israel and the West’s backing of terrorism and by media complicity.