Oxfam: Global Billionaires’ Wealth up $3.9 Trillion during the Pandemic

Inequality Expected to Rise in Every Country “Simultaneously”

26 Jan 2021 – A new report issued by the UK-based charity Oxfam International ahead of this week’s virtual World Economic Forum, which is usually held annually in Davos, Switzerland, underlines the effect of government policies enacted in response to the emergence of the coronavirus pandemic. The report shows that deliberate policies enacted by capitalist governments around the world have resulted in a further concentration of wealth within the financial oligarchy, while exacerbating already historic levels of global wealth inequality. 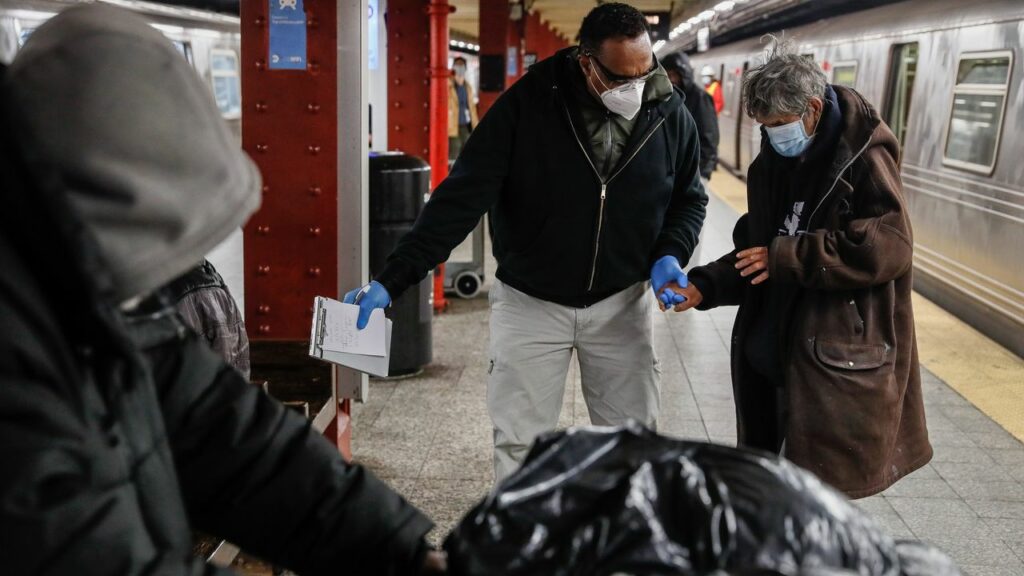 A homeless man is given assistance by a homeless outreach worker in the 207th Street station for the A train, Thursday, April 30, 2020, in the Manhattan borough of New York. (AP Photo/John Minchillo)

Testifying to the interconnected character of the global capitalist system, the report notes that for the first time since 1870, the oldest tax records available to Oxfam, “per capita incomes are expected to decline in all regions.” It continues: “This means it is likely that COVID-19 will drive up inequality in virtually every country on earth simultaneously. This will be the first time that this has happened since records of inequality began, over a century ago.”

Annual reports from Oxfam have for years highlighted the ever-worsening inequality endemic to the capitalist system. In the latest report, the authors write: “The total number of billionaires nearly doubled in the ten years after the financial crisis of 2008, and between 2017-2018 a new billionaire was created every two days.” Meanwhile, Oxfam estimates that globally 56 percent of the population lives on between $2 and $10 a day.

While more than three billionaires were being minted every week before the pandemic emerged, Oxfam notes that “billions of people were already living on the edge… they did not have any resources or support to weather the economic and social storm it created. Over three billion people did not have access to health care, three-quarters of workers had no access to social protection like unemployment benefits or sick leave, and in low- and lower-middle income countries over half of workers were in working poverty.”

The report notes that while millions of workers the world over have lost their jobs, wealth and loved ones over the last year, billionaires’ collective wealth increased by a stupefying $3.9 trillion between March 18 and December 31, 2020. The 10 richest “pandemic profiteers,” including Tesla CEO Elon Musk, Amazon’s Jeff Bezos, Zhong Shanshan, founder of beverage company Nongfu Spring, and Microsoft’s Bill Gates, have seen their wealth increase by over $540 billion over the same period.

The $540 billion hoarded by just 10 people, Oxfam writes, “is more than enough to prevent anyone on Earth from falling into poverty because of the virus and to pay for a COVID-19 vaccine for all.”

While billionaires’ wealth and lives have been protected throughout the pandemic, COVID-19 infection and mortality rates, Oxfam notes, “have a clear social gradient.” It explains: “COVID-19 mortality in the most deprived 10 percent areas in England is twice that of the least deprived 10 percent. Similar trends have been reported in France, Brazil, Nepal, Spain and India.”

While governments the world over have spent relatively little on measures to contain and eradicate the coronavirus, which has so far killed more than 2.1 million people worldwide—430,000 of these deaths in the US alone—they have opened their coffers to provide the financial oligarchy with trillions of dollars in bailouts. At the same time that have demanded that workers risk their lives in disease-ridden workplaces and schools in order to continue the extraction of surplus labor value.

The clearest example of this was the quickness with which the world’s top billionaires recovered their wealth after the pandemic sent stocks plummeting in March 2020. Oxfam noted that it took the world’s top 1,000 billionaires nine months to recover their wealth, while it may take the world’s poor, which Oxfam estimates to have increased between 200 and 500 million globally throughout the pandemic, over a decade to return to “pre-crisis” levels.

The resulting growth of inequality and further concentration of wealth for a select few are the result of deliberate policy choices implemented by capitalist governments around the world, placing profits before lives.

This was seen in the US with the rapid and near unanimous passage of the multi-trillion-dollar CARES Act at the end of March 2020. The bill did not allocate billions to workers and their families to allow them to stay home while resources were used to train and hire thousands of doctors and nurses to care for the sick, implement a nationwide testing and contact tracing program, or build new hospitals.

Instead, the bipartisan measure provided a pittance to jobless workers, essentially blackmailing workers to go back on the job, while providing Wall Street with unlimited funds through quantitative easing policies via the Federal Reserve. This class policy safeguarded and increased the wealth of the ruling class, whose fortunes are predicated on the never-ending rise of the stock market.

While the CARES Act provided a one-time $1,200 check for adults and short-term enhanced unemployment benefits, the expiration of these benefits has since led to an increase in poverty in the US, according to new research by the University of Chicago’s Harris School of Public Policy and the University of Notre Dame.

The authors of the study note that while poverty declined in the first few months of the pandemic, from 10.8 percent in January 2020 down to 9.3 percent in June, by the end of July, which saw the expiration of the $600 unemployment payments enacted in the CARES Act, poverty began to increase in the following months, ending December 2020 at 11.8 percent. The increase of 2.5 percentage points from July translates to some 8.1 million people, nearly equivalent to the population of Switzerland.

The widening inequality was reflected, Oxfam notes, in the fact that the top 25 US corporations earned “11 percent more profits in 2020 compared with the previous year,” while “small businesses in the US looked likely to lose over 85 percent of their profits in the second quarter of the year.”

Ever rising corporate profits and the increasing wealth of billionaires is due to deliberate policy decisions. Oxfam writes that “between 1985 and 2019, the global average statutory corporate tax rate fell from 49 percent to 23 percent, and since 1980 the top rate of personal income tax in the US has almost halved, from 70 percent to 37 percent. On top of losses due to lower tax rates, the Tax Justice Network estimates that countries are losing a total of over $427 billion in tax each year to international corporate tax abuse and private tax evasion, ‘costing countries altogether the equivalent of nearly 34 million nurses’ annual salaries every year–or one nurse’s annual salary every second.’”

While the concentration of wealth is most starkly expressed in the US, the same processes are taking place throughout the world. Oxfam notes that between March and August 2020, billionaires in the Middle East and North Africa increased their wealth by 20 percent, “almost five times the value of the United Nations’ COVID-19 humanitarian appeal for the region.” Likewise, in Latin America and the Caribbean (LAC), “the combined wealth of billionaires increased by 17 percent between March and July 2020… more than five times the amount needed to prevent 12.4 million people from falling into extreme poverty in the LAC region for a year.”

The latest Oxfam report is a damning indictment of the capitalist system, but like previous reports issued by the charity, it fails to correctly identify the problem and therefore offers reactionary solutions for dealing with the historic crisis. Adopting the identity politics language of the postmodernists, the authors point to “patriarchy,” “structural racism” and “ingrained… white supremacy” as the “root causes of injustice and poverty.”

Ignoring their own findings, which clearly show that global inequality is not a question of race or gender but the capitalist economic system, the authors advocate for world governments to move beyond measuring the Gross Domestic Product of a country as a measure of economic success and well-being, and instead adopt new indicators centered around “wellbeing, sustainable development, inequality, and the environment.” The authors positively cite the capitalist government of New Zealand as an example.

The fact is that despite nearly a decade of such reports and recommendations from Oxfam, the situation has only worsened. With the pandemic, which the World Socialist Web Site has identified as a “trigger event” in world history, similar to the outbreak of World War I, the solution will not be found in appealing to the current ruling elites for change. Just as soldiers in the war were sent to the trenches to die for each warring nation’s bourgeoisie over 100 years ago, teachers are being funneled back into deadly classrooms in order to watch children so parents can risk infection by going to work in order to keep the profits flowing upward.

And while President Joe Biden and the Democratic party utilize the same language Oxfam employs, pledging to combat “white supremacy” and “patriarchy,” the fact is that both accept capitalism as unquestionable and eternal. Their “solutions” are nothing but hot air meant to dissipate growing social anger towards the existing system and chloroform the international working class from carrying out its historic tasks.

The only path to eliminating inequality and creating an economy and world that provide “from each according to his ability, to each according to his needs” is for the working class to take political power in every country. Workers and young people making the decision to form Rank-and-File Safety Committees across the US and internationally and become members of the Socialist Equality Party is the first step in making this necessity a reality.