Switzerland Refuses to Approve AstraZeneca Jab and Says ‘New Studies’ Are Needed after France, Germany and Sweden Rejected It for Over-65s 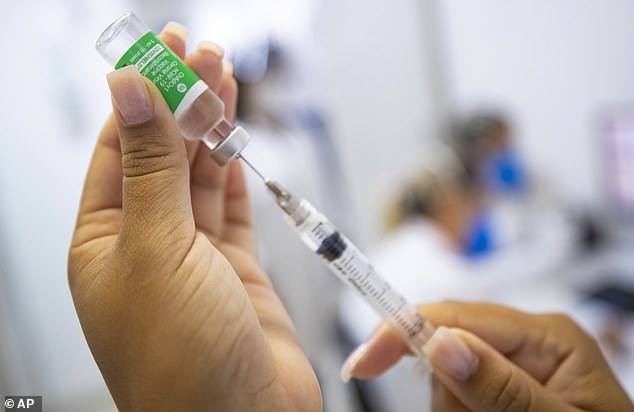 It comes after France, Sweden and Germany advised against administering the jab to those over 65 and Emmanuel Macron claimed it was ‘almost ineffective’ for the age bracket.

That is despite Oxford data published this week suggesting the jab is 76 per cent effective after just one dose, and may also prevent 67 per cent of infection.

British Prime Minister Boris Johnson has also weighed in, saying the jab is ‘is very good and efficacious’ in all age groups.

Continental objections to the jab come amid a furious row between the EU and AstraZeneca over lagging supply, which has seen newly-unshackled Brexit Britain storm ahead in its immunisation roll-out. 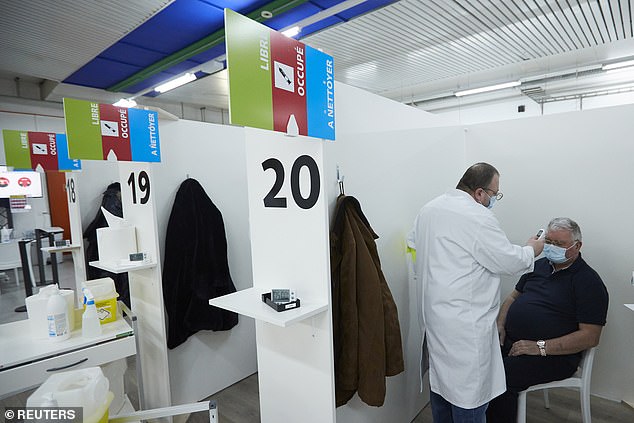 Switzerland has refused to approve the Oxford AstraZeneca vaccine amid concerns over insufficient data and regulators said ‘new studies’ were needed. Pictured: A medic checks a man’s temperature at a vaccination centre in Geneva, Switzerland 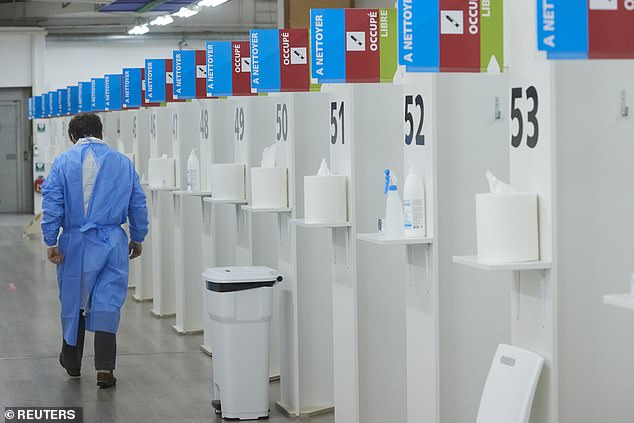 The Swissmedic regulatory authority said it had been examining information from the pharmaceutical giant but that was ‘not yet sufficient to permit authorisation’. Pictured: Vaccination centre in Geneva

The Swissmedic regulatory authority said it had been examining information from the pharmaceutical giant but that was ‘not yet sufficient to permit authorisation’.

‘To obtain more information about safety, efficacy and quality, additional data from new studies are needed,’ it said in a statement.

Switzerland has so far given the green light to Covid-19 vaccines made by Pfizer-BioNTech and Moderna.

Switzerland had been expected to authorise the AstraZeneca jab soon, after the European Union last week gave the vaccine the go ahead for people over the age of 18.

But the Swiss today agreed with France, Sweden and Germany that there was not enough data to show how the vaccine affects elderly patients.

Approved for the EU

BioNTech/Pfizer (German/US, mRNA vaccine, 95-percent efficacy according the European Medicines Agency): 600 million doses. Its first-quarter deliveries to EU member states were cut by as much as half, but the company vows they will be back to normal by mid-February.

AstraZeneca (Anglo-Swedish, adenovirus, 60-percent efficacy): 400 million doses. It was meant to have delivered more than 100 million doses in the first quarter, but on December 22 said that would be cut to 31 million. Von der Leyen announced on Sunday that would now be boosted to 40 million.

Johnson & Johnson (US, adenovirus, efficacy unknown): 400 million doses. The Commission says 100 million should be delivered by June if this single-shot vaccine is approved.

Swissmedic said a meeting of its external advisory body on Tuesday had confirmed its interim assessment of the AstraZenica vaccine data.

‘The data currently available do not point to a positive decision regarding benefits and risks,’ it said.

‘To obtain a conclusive assessment, the applicant will among other things have to submit additional efficacy data from a Phase 3 trial under way in North and South America, and these will have to be analysed.

‘As soon as the results have been received, a temporary authorisation according to the rolling procedure could be issued at very short notice,’ it added.

Switzerland, which kicked off vaccination against the deadly coronavirus in late December, meanwhile announced Wednesday that it had signed three more contracts to acquire another 17 million vaccine doses.

The country of 8.5 million people said it had reached an agreement with Germany’s Curevac, whose vaccine is in Phase 3 trials, and the Swedish government for the delivery of five million doses.

It said it had also signed a preliminary agreement with US firm Novavax for six million doses.

These will add two new vaccines to the Swiss portfolio, if they are approved by regulators.

At the same time, the Swiss government had also signed a deal to acquire an additional six million doses of the Moderna vaccine, bringing the total number of those jabs available in Switzerland to 13.5 million.

In addition, the government has signed deals for access to around three million Pfizer-BioNTech doses and 5.3 million AstraZeneca doses.

Amid concerns over the AstraZeneca jab, Prime Minister Boris Johnson and UK health chiefs have insisted that the vaccine, made by Swedish-British pharmaceutical giant AstraZeneca, is effective for all age groups.

Mr Johnson said on Friday that the vaccine ‘is very good and efficacious’ after health officials in Berlin warned that there was ‘insufficient data to assess the efficacy of the vaccine for persons aged 65 years and older.’

It was revealed yesterday that research suggests a single shot of the AstraZeneca vaccine is 76 per cent effective at preventing symptomatic illness and may have a ‘substantial effect’ on transmission.

Analysis of the jab trials found the first dose was extremely successful in preventing people from falling ill within the 12-week time window between getting a second dose.

When the second dose is administered after three months, the jab’s efficacy is bumped up to 82.4 per cent, according to the study, which involved more than 17,000 trial volunteers.

Meanwhile, analysis of PCR positive swabs carried out on nearly 7,000 patients in the UK arm of Oxford’s trial suggests the vaccine may reduce transmission by 67 per cent.

But pouring petrol on the row again yesterday, European Commission President Ursula von der Leyen accused Britain of compromising on safety by giving swift approval to the jab. (Read on…)