The Big Tech Takeover of Agriculture Is Dangerous

It will endanger the livelihood of the world’s small farmers and food workers and completely transform our food systems. 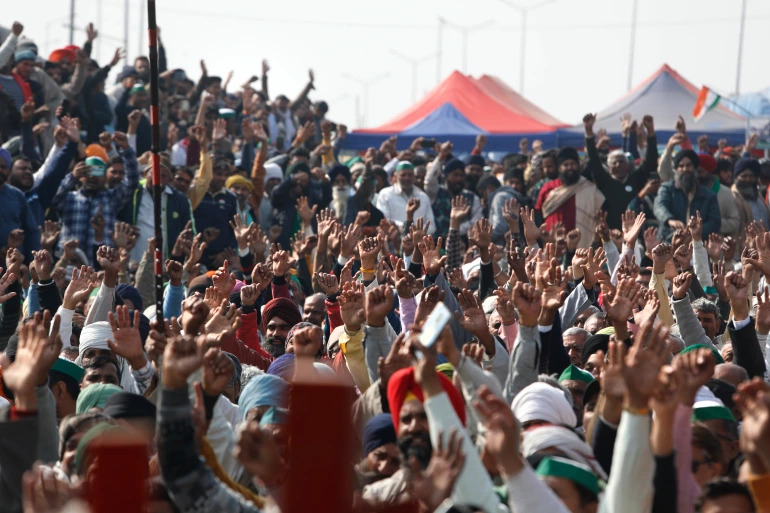 Farmers raise their hand as they shout slogans during a day-long hunger strike to protest against new farm laws, at the Delhi-Uttar Pradesh border, on the outskirts of New Delhi, India, January 30, 2021. [Manish Swarup/AP Photo]

5 Feb 2021 – On January 15, Liu Jin, a 45-year-old driver for Alibaba’s food delivery platform in the Chinese city of Taizhou, set himself on fire in protest over unpaid wages. “I want my blood and sweat money back,” Mr Liu said in a video shared widely over social media.

Meanwhile, across the border in India, millions of farmers were refusing to vacate the streets of New Delhi. They had been protesting for months, stubbornly defying the central government’s attempt to impose reforms that would put them at the mercy of giant corporations.

The two protests may be different in form, but have something fundamental in common. Each expresses outrage over the takeover of food systems by some of the world’s largest technology companies. In China, Alibaba has been leading a wave of investments and takeovers by technology companies in the food system, most recently spending $3.6bn to acquire the country’s largest chain of hypermarkets. In India, similar moves are being made by companies like Amazon and Facebook, through the backdoor of e-commerce, to take over food distribution and retail in partnership with India’s wealthiest tycoons and the backing of the central government’s reforms.

Big Tech’s ambitions with food and agriculture go beyond China and India. They are global and extend to all aspects of the food system, including what is being called digital agriculture. While some see in this a means to bring new technologies to farming, technology does not develop in a bubble. It is shaped by money and power both of which the technology sector currently enjoys.

In a new report, our organisation GRAIN looks at how Big Tech is promoting industrial agriculture and contract farming and undermining agroecology and local food systems through its development of digital agriculture platforms. As the report shows, the consequences are particularly severe for small farmers in the Global South.

Just as with other sectors of the economy, large corporations – be they technology companies, telecommunications, food companies, agribusinesses, or banks – are racing to collect as much data as they can from all nodes of the food system and to find ways to profit from this data. These efforts are getting more and more integrated and connected through corporate partnerships, mergers and takeovers, enabling corporate capture of the food system.

By far, the biggest players in this mix are the global technology companies. Microsoft, Amazon and IBM are all busy developing digital agriculture platforms to collect large amounts of data, which can then be processed with their powerful algorithms to provide farmers with real-time data and analysis on the condition of their soils and water, the growth of their crops, the situation with pests and diseases and the looming weather and climatic changes they may face.

This may be appealing for farms in areas where there is a lot of data collection (regular soil tests, field studies, yield measurements) and for farms that can afford technologies that collect data (like tractors, drones, and field sensors). For these farms, technology companies can gather enough quality data to provide advice on fertiliser application, pesticide use, and harvest times that can be fairly specific and useful. It helps a lot if these farms are cultivating large areas with single crops, as this makes data collection and analysis much simpler.

It is a different story for the 500 million or so small farm households in the world who produce most of the world’s food. They tend to be located in areas where there are minimal to no extension services and hardly any central collection of field data. Nor can small farms afford the high-priced data gathering technologies to feed information to the cloud. As a result, the data technology companies collect on small farms will inevitably be of poor quality.

The advice small farmers will get from such digital networks, via text messages on their mobile phones, will be far from revolutionary. And, if these farmers are practising mixed cropping and other agroecological practices, any advice they receive will be useless.

Good advice to farmers is not really the end game here anyway. For the corporations investing in digital agriculture, the objective is to integrate millions of farmers into a vast, centrally controlled digital network. Once integrated, they will be heavily encouraged – if not obligated – to buy their products and to supply them with agricultural commodities, all of this functioning through the mobile money systems being developed by the same companies.

Big Tech’s emerging digital platforms will not help farmers share their knowledge or promote their diverse seed and animal varieties. The platforms will emphasise conformity; participating farmers will have to buy the inputs that are promoted and sold on credit (at high interest rates), follow the “advice” of a chatbot to qualify for crop insurance (which they must pay for), sell their crops to the company (at a non-negotiable price), and receive payments on a digital money app (for which there is a fee). Any missteps can affect a farmer’s creditworthiness and access to finance and markets. It will be contract farming on a mass scale.

These developments in digital agriculture are not divorced from Big Tech’s aggressive moves into food distribution and retail. In fact, digital agriculture is building the centralised production systems upstream that will supply Big Tech’s evolving operations downstream, which are rapidly displacing the small vendors, hawkers and other local actors who have long served to bring foods from small farmers to consumers. The stage is being set for today’s small farmers and vendors to be tomorrow’s pieceworkers for Big Tech companies.

But Big Tech’s attempt to take over food systems will not go unchallenged. What we see today on the streets of New Delhi is just the beginning.