Until Feb. 1 Coup, West and Rest Were Coasting Bogus Narrative of ‘Fragile Democratic Transition’ with Suu Kyi at Its Helm 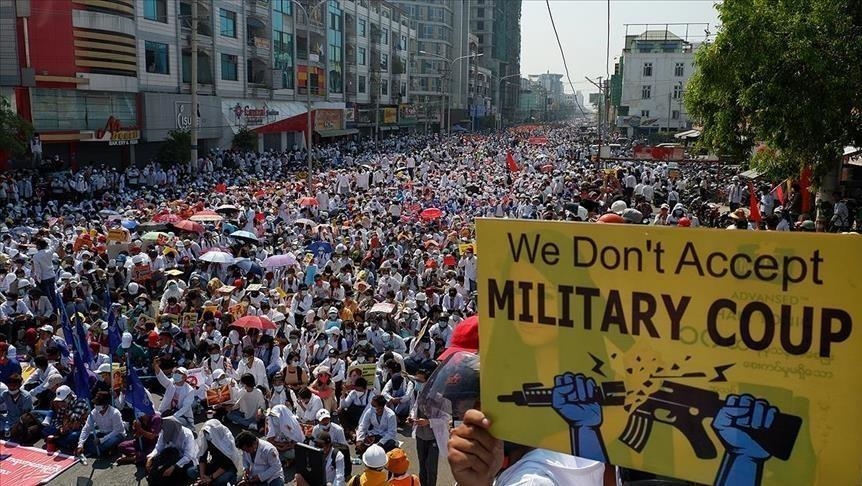 11 Mar 2021 – A deeply troubling aspect of the increasingly vicious behavior of the State Administrative Council (SAC), the coup regime, in Myanmar toward civilians regardless of faith, geography, or ethnicity, is its sense of untouchability at the UN Security Council.

Of all the global governing institutions, only the council can take any effective and credible measures against the commanders responsible for security troops who have for decades been terrorizing unarmed, peaceful protesters on the streets. To belabor the obvious, SAC leaders enjoy the protection of not just one, but two, vetoes by China and the Russian Federation.

Consequently, this sense of blanket impunity pervades and emboldens, in words and deeds, the entire military establishment, from the senior-most generals to the rank and file of the Tatmadaw, including military doctors.

“It’s perfectly OK for the Tatmadaw to kill 1 million out of 53 million people in order to put down the popular revolt and restore order,” Col. Aung Kyaw Zaw, a heart specialist from the Ministry of Defense, is said to have told his shocked medical staff at a private hospital in Yangon, where he moonlights.

It is not fake news or anti-regime propaganda. My doctor friends, whose horrified colleagues work alongside the colonel at the said hospital, recounted to me last night what they have recently learned from sources.

Dr. Aung Kyaw Zaw is not an average medical professional. He is married to the oldest daughter of retired Gen. Kyaw Htin, former defense minister and one of the top five deputies of late dictator Gen. Ne Win. The military doctor moonlights at Kan Tha Ya (or Pleasant Lake) private hospital in Yangon privately owned by coup leader Min Aung Hlaing’s family.

But the heart specialist sharing openly his desire for 1 million hearts to stop beating, is just for starters.

The good doctor proceeded to talk about how successive generations of military leaders – from generals Saw Maung, Khin Nyunt, and Than Shwe – have gotten away with even the genocide against Rohingya, not to mention the previous bloody crackdowns against the student and civilian protesters in 1988 and monks in the 2007 Saffron Revolt. These are names no longer on the radar of international accountability campaigns.

Apparently, there is zero institutional memory on Myanmar affairs amongst the circles of global policymakers, advisers, or the media.

For us, the three generations of Myanmar’s democrats and the wretched communities of ethnic nationalities who have been subjected to systemic repression and chronic waves of terror and military violence by the Tatmadaw regime since its textbook coup of March 1962, international impunity which Myanmar’s military leaders have for too long enjoyed, is a part of our painful collective memories.

The Revolutionary Council, Gen. Ne Win’s coup regime, slaughtered several hundred anti-coup protesters on the main Chancellor’s Road on Rangoon University campus on July 7, 1962.  Ne Win ordered the massacre of unarmed student protesters four months after the “bloodless” coup against the democratically elected government of Prime Minister U Nu.  Then his troops proceeded to dynamite the historic Student Union building, a key stronghold for the old anti-British resistance movement, the next morning.

A retired medical doctor, now in his mid-seventies, told me he witnessed how the Tatmadaw troops gunning down peaceful student protesters and onlookers on campus and subsequently hosing away patches of students’ blood on the street and on campus buildings, using fire engines. Thanks to social media, I now routinely watch uploaded video clips – and even Facebook live – of similarly horrid scenes of the troops intentionally murdering a new generation of unarmed protesters throughout the country.

Just several years after the massacres by Gen. Ne Win, US President Lyndon B. Johnson invited Ne Win – known for his anti-Communism – to a full-fledged state visit to Washington, holding his nose for the US containment policy. At Ne Win’s request, the LBJ administration even ordered the FBI to quarantine a few Myanmar democrats in exile in order to ensure the murderous general’s visit went without any unpleasant incident.

Throughout the Cold War, the US provided hundreds of millions of dollars ostensibly for the Myanmar military’s anti-narcotic operations, both in cash and in-kind (for instance, dual-use helicopters and aircraft for aerial anti-opium spray), while the Central Intelligence Agency and US Command and Staff colleges trained hundreds of military officers from all branches of Myanmar military,  all paid for by US taxpayers. 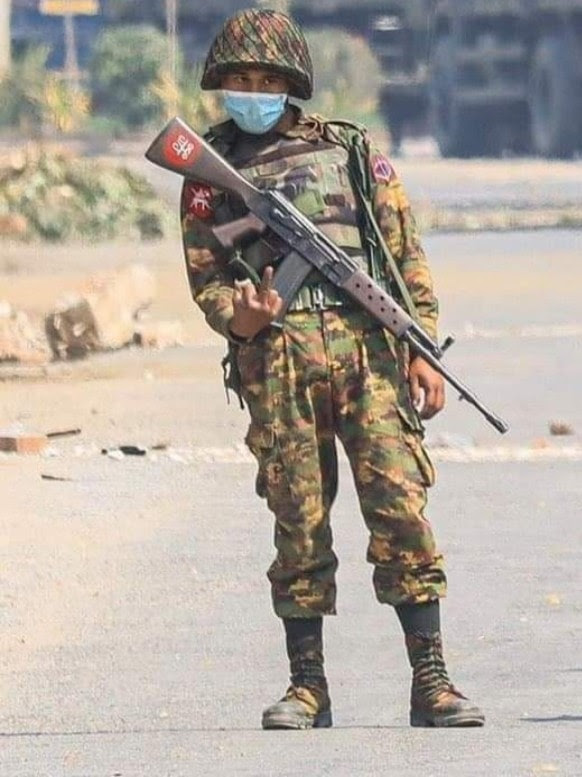 The picture of a Myanmar soldier from one of one of the military’s most notorious Light Infantry Divisions showing his middle finger at the protesters in an upcountry (Dry Zone) town perfectly captures the typical/institutionalized attitude of the Burmese coup regime – all military regimes since 1988, for that matter – to the United Nations, or “the international community”. (Maung Zarni)

US Was Not Alone

During the isolated quarter-century of the ’60s, ’70s, and ’80s, Gen. Ne Win was feted in western democratic countries, such as West Germany, Japan, Switzerland, and the UK, to name a few. An annual VIP visitor to the UK – for golfing, horse-racing, and medical check-ups – Gen. Ne Win sipped tea at the Buckingham Palace with the Queen who, according to a retired British diplomat, considered the Burmese mass-murderer “a nice chap.”

One consolatory thought for the thousands of Myanmar nationals – who were tortured by CIA – and British Policy academy-trained interrogators, rotting behind Ne Win’s jails, having forcibly been exiled – might be that at least Her Majesty’s Government did not knight Ne Win, unlike another nice chap Robert Mugabe!

All these mass-murder enabling programs stopped after the 1988 popular uprising that triggered the collapse of Ne Win’s nominally socialist one-party dictatorship while the ideological winds of democracy and “civil society” were blowing across the countries under leftist totalitarian regimes, worldwide.

Upon closer scrutiny, however, both throughout the Cold War and thereafter, Western governments, global governing institutions, and international financial institutions largely kept intact their commercial and strategic ties with Myanmar’s murderous military. Even when the EU closed Myanmar offices of military attaches, as required by the sanctions, the European governments looked the other way.

Taking the cues from influential western regimes, the World Bank, the International Monetary Fund, the UN Development Program, the Asian Development Bank, the UK Department of International Development, Japan’s International Cooperation and Assistance, unified Germany’s Development Agency (GDZ) and so on, continued to lend the murderous military leaders international recognition.  These entities provide the reviled regime of Myanmar with hundreds of millions of dollars in aid, grants, and loans, while encouraging foreign direct investment in natural resource extractive industries. To paraphrase the mission statement of the post-Cold War creature, the International Crisis Group, the trend was to turn formerly conflict-soaked regions and countries (formerly closed societies) into free markets.

Alas, holding the nose for the egregious and well-documented crimes ever encoded in international law was per for the course with Western democratic governments and their international proxies, including INGOs, think tanks, and development agencies, instrumentalizing the loaded-ideas of development, (Free Market-friendly) civil society, peace-building and all the rest.

Even when the sanctions were imposed by the US, Canada, and the European Union, the seemingly punitive measures were crafted in such a way as to permit the pursuit of western corporate and strategic interests in military-ruled Myanmar. For instance, when in 1997 the US and EU first imposed its sanctions on Myanmar, large enough loopholes in the sanctions law were created. Existing multi-billions dollar investment projects in oil and gas and other natural resource extractive sectors were left undisrupted.

This largely business-as-usual approach to Myanmar’s military leaderships was despite well-documented reports of crimes against humanity in the Rohingya homeland of Western Myanmar, war crimes in other minority regions of Eastern, Northern and Southern Myanmar, the pervasive use of forced labor on western joint ventures, and systematic destruction of anything considered pro-democracy opposition to the military.

Over the last 10 years, the mind-numbing frequency of news and rights reports of Myanmar military’s genocide against Rohingya did not deter international policy circles to take a step back, review their Myanmar policies, put a moratorium on investment and development aid, or reassess their military-to-military ties with Myanmar, still in the firm grip of the genocidal military.

Neither the initial unanimous decision in January 2020 by the International Court of Justice to impose provisional measures on Myanmar in the pending The Gambia vs Myanmar case nor the ongoing full investigation of Myanmar’s international crimes against Rohingya had any appreciable policy impact on the national or international policies of any government, regional blocs or International Financial Institutions.

Until the Feb. 1 coup and the detention of Aung San Suu Kyi, her puppet president Win Myint, and other civil society and political leaders, the West and the rest were coasting along with the bogus narrative of the “fragile democratic transition” with Suu Kyi at its helm. Over the last 60 years, no Myanmar military leader with his ultimate command responsibility for any international crime has been held to account, internationally.

Fast learners, successive generations of Myanmar military leaders have decided that six decades of the total absence of accountability for their war crimes, crimes against humanity, and even genocide are solid proof that they can get away with mass-murder and now domestic terrorism.   Just today the regime just murdered another one dozen unarmed protesters across Myanmar within 12 hrs of UN Security Council President’s (empty) statement of condemnation of the former’s violence.  Without a doubt, Myanmar regime’s continuing crimes against humanity directly correlate with the blanket impunity these mass-murderers in general’s uniform have enjoyed. 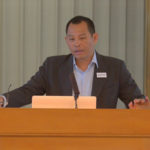