For the Sixth Time, Israel Razes a Disabled Palestinian’s Home

There’s no way for Palestinians to build legally on their own land in Isawiyah. Almost all the construction there has been illegal, but the Jerusalem Municipality has chosen to single out this man. 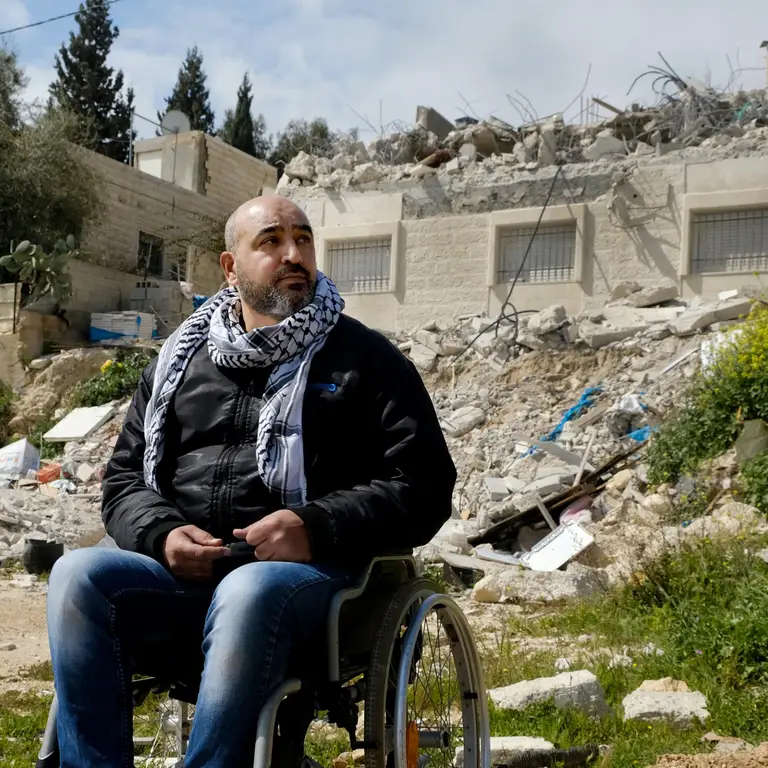 Khatham Abu Riala in front of what used to be his home in Isawiyah.
Credit: Alex Levac

4 Mar 2021 – A disabled man watches as a bulldozer demolishes his home. Just a few dozen meters separate him from the structure, whose second story is now collapsing into itself. The bulldozer batters the walls of the stone building – which was still under construction – pounding and smashing, toppling yet another wall and destroying another room on this upper floor, transforming it into a heap of rubble. Its owner, who invested all his savings in the construction, watches the devastation from his wheelchair, surrounded by Border Police troops who appear as menacing and violent as ever.

It’s not the first time he’s witnessing this scenario; that happened in 1999. Nor is it the second, third or fourth time: Israeli authorities have demolished his home six times. Maybe that’s why only a handful of residents in Isawiyah, the East Jerusalem neighborhood whose residents make a point of calling it a “village” – as if to recall good times that will never return – have turned up to be with him in his distress.

Monday, this week, Isawiyah. Khatham Abu Riala has had to use a wheelchair since the second demolition of his home, on February 4, 2009. While protesting it, he stumbled and fell from the roof of the building, just before it was razed to the ground. The plunge of seven meters (23 feet) onto rocky ground injured his spinal cord, leaving him paralyzed from the waist down – and unemployed. Before his injury he had been a driver for the Superbus firm; he’s wearing the company coat today to protect himself against the bracing Jerusalem cold. He’d also done a stint as a truck driver in the port of Ashdod.

Abu Riala’s disability stirred no compassion in the corridors of Jerusalem’s city hall. Its officials are also indifferent to the fact that there’s no way for Palestinians to build legally in Isawiyah. Almost all the building that’s gone on there since 1967 is illegal, but the Jerusalem Municipality has apparently chosen to focus its efforts onto this man in particular. It has been waging an unrelenting battle against Abu Riala, who for 22 years has been trying to build a home for himself on land that he owns, abutting his parents’ house – 22 years during which the municipality still hasn’t approved an updated master plan for Isawiyah and is effectively banning new construction there.

“People get married. Children are born. Where will we live? Are we all supposed to live in one room?” Abu Riala asks. “It’s the task of the city to prepare a master plan. They tell me: Go to Beit Hanina [another East Jerusalem neighborhood that’s further out, en route to Ramallah]. But I have land here. This is where I was born. Why should I go to Beit Hanina if I have property here?”

The last, fifth, time his home was razed by private contractors working on behalf of the city of Jerusalem was in December 2019. In May 2020 he began rebuilding, until the authorities warned him to stop. Since then, the threat of demolition hung over the dwelling, whose construction had was almost been completed. 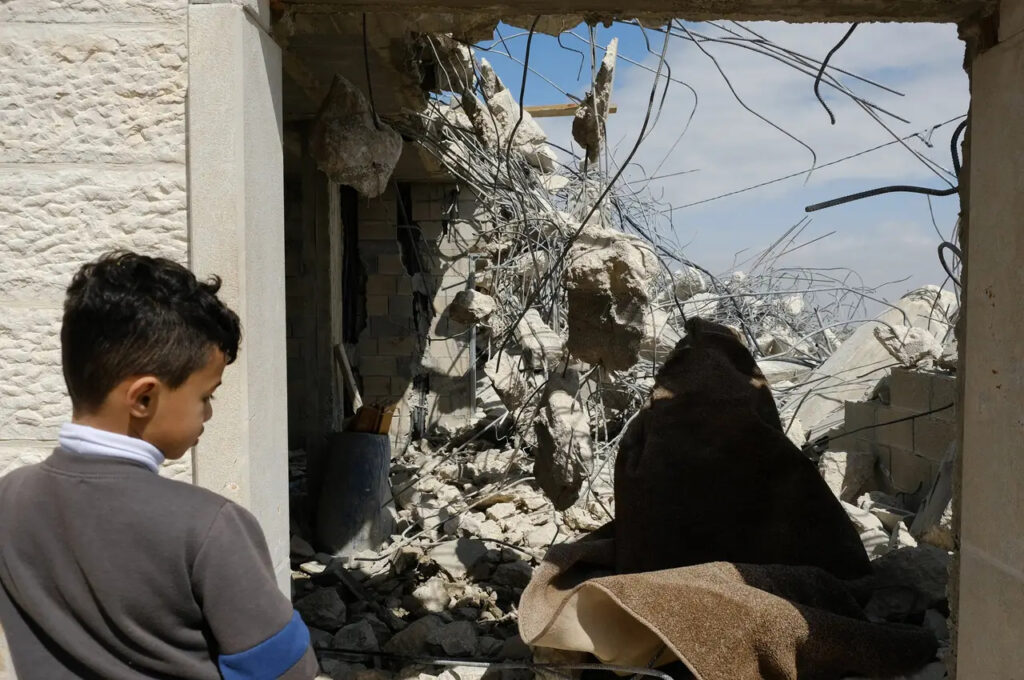 Clearly, we’re not talking here an Israeli settlement or settler outpost, or even about a new neighborhood for ultra-Orthodox Jews from America. This is an occupied Palestinian village.

When we arrived in Isawiyah late Monday morning, the mission had already been accomplished and the security forces had left the village. Abu Riala was sitting in his wheelchair on the rocky ground opposite the ruins of his home, surrounded by a few men who had come to comfort him and lift his spirits, as in a mourning tent. Among them was social activist Mohammed Abu Hummus, whose body is scarred from the rubber-tipped metal bullets fired at him by the Israel Police over the years at demonstrations against house demolitions and other protest activities.

Abu Riala’s home is on the eastern edge of Isawiyah, facing the desert. His nephew lives with his wife and their one child on the ground floor of the structure, which for some reason was not targeted, while the second floor was earmarked for Abu Riala, his wife and two children. Only on that floor could Abu Riala have wheelchair accessibility, since the building stands on the slope of a hill.

The concrete slabs and iron rods that have piled up at the entrance to the first floor totally block the door now. The result: Abu Riala’s nephew, Yassin Nasser, his pregnant wife Maha and their 3-year-old son Karam are also without a roof over their heads. And even if the rubble blocking the entrance to their apartment is cleared away, they still won’t be able to move back in, because of the cracks and holes in the ceiling of their home. Moreover, any approach toward the decimated upper floor is hazardous for the youngsters now wandering among the ruins.

The municipality is done here.

Abu Riala was born in 1978 and grew up in what is now his parents’ house, close to the newly demolished building; he and his own family moved in with his folks during the construction. His childhood home once stood amid a rural landscape, with his father raising cucumbers and tomatoes in an adjacent field. “We grew up in nature here,” he tells us. 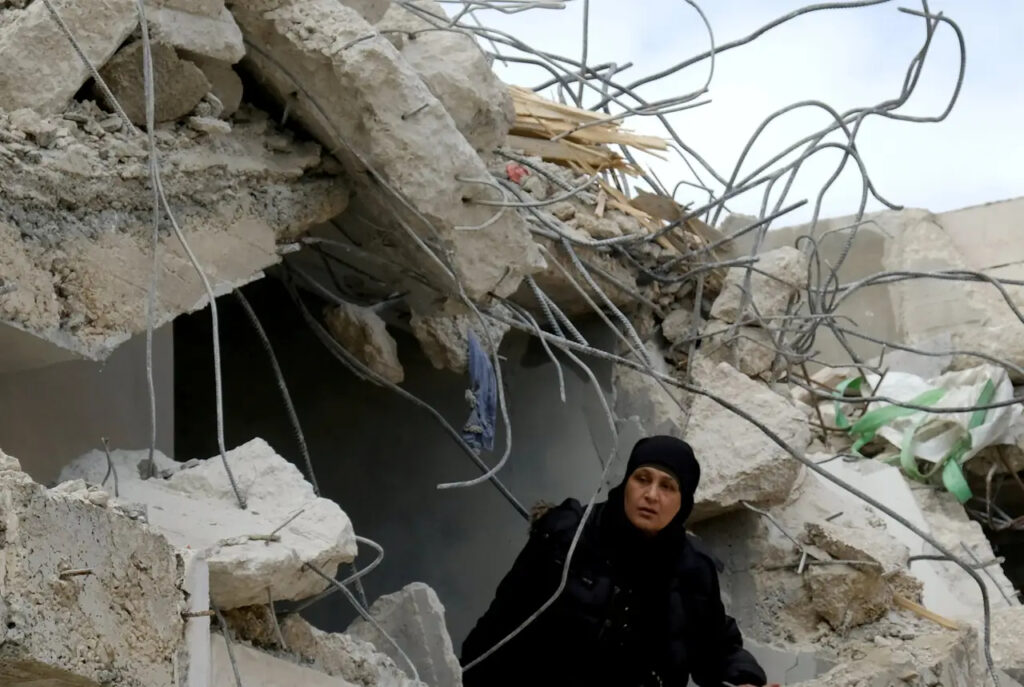 He is married to Hiba and they have a son – Anas, 14 – and a daughter, Dania, a year younger. Monday, wrecking day, was also Anas’ birthday. The only time Abu Riala’s eyes became moist when we talked to him was when he recalled that his son had asked on Sunday how they would celebrate his birthday. Now they know.

Thursday a week ago, Border Police personnel and municipal officials arrived at the house and photographed it. That was a bad omen. They returned on Sunday. That evening, based on information they got from someone in the municipality, Isawiyah’s two mukhtars, Khader Abayat and Omar Zumzum, promised Abu Riala that his house would not be demolished the next day. “You can sleep quietly at night and not worry. There will be no demolition tomorrow,” the mukhtars told him.

Still, Abu Riala had a sleepless night. At 4:30 A.M. he went to the local mosque for the dawn prayers. He was overjoyed to see that there was no commotion in the village; he saw no police officers, no bulldozers, no municipal officials. “I said to myself, ‘God, the mukhtars were right. There will be no demolition today.’” He went home. But at 7:20 he got a call from his brother Jawad, from the plastics factory in Kiryat Malakhi where he works. Jawad told his brother that photographs of police forces and bulldozers at the entrance to Isawiyah had been posted on social media.

A few minutes later he heard the Border Police trying to force open the entrance to his home. Eight officers were at the door. He was ordered to leave the premises with his family – the demolition was beginning. Abu Riala tells us he had tried to explain that his children were still sleeping, but to no avail. The officials told him, “We’ll demolish this structure, and then you can request a permit to rebuild.”

For 22 years he’s been requesting a permit. “There is no permit. Building is not allowed. We will sit for another 22 years, legs crossed, and wait for the municipality to complete its new master plan,” he says in despair.

What riled Abu Riala most, he adds, was the wreckers’ behavior. “They were laughing. Have you no shame? Our heart is burning and you’re laughing? The driver of the excavator laughed. Why are you laughing in this situation? In order to tell us: We have broken you. It’s people’s lives you’re demolishing.” Thus Abu Riala sat, with his wife Hiba, their two children and his mother-in-law, and watched the destruction. It began at 7:30, and by 11:30 it was done. 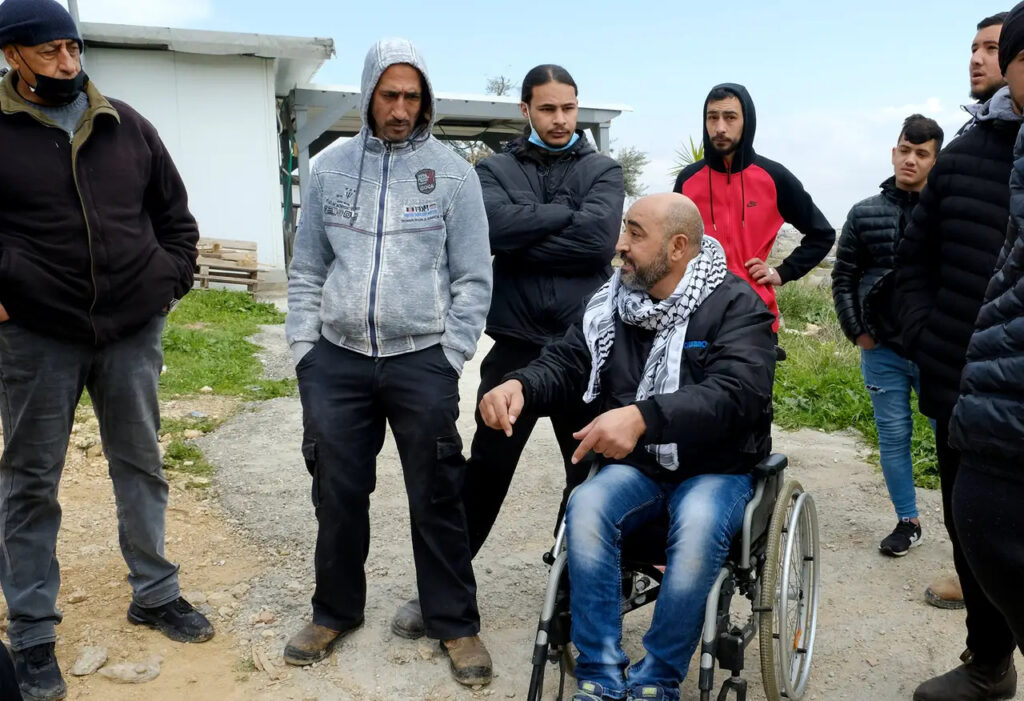 His children have been in a state of shock ever since, he tells us. During most of the previous demolitions they were infants. Dania asks when she will have a room of her own. Anas wants to celebrate his birthday. “They cried and I gave them tissues,” their father says. “The bulldozer ate the stone and ate my heart.” Over the years, he says, he’s spent 650,000 shekels (about $197,000) on his struggle to build a home for himself on his land, at 31 Tarin al-Madras Street.

Jerusalem Municipality spokesperson Yaron Lupo issued the following statement to Haaretz: “This is construction done without a permit, for which an administrative demolition order was issued, and implemented on Monday. It is a repeat demolition of construction that had been dismantled as per a demolition order in 2019 and was rebuilt. Two demolitions of the building have been carried out and not six, as was claimed.

“The demolitions were carried out by an administrative order and according to the law, following authorization by a number of legal instances, within the framework of municipal enforcement activity against building offenders throughout the city, and certainly in the case of construction offenses that are repeated in the same building, in defiance of the courts and the rule of law.”

Aviv Tatarsky, a researcher who deals with planning issues on behalf of the nonprofit Ir Amim, said: “Building without a permit is forced upon the Abu Riala family, as it is on a large proportion of Isawiyah residents, by Israeli policy. A year ago, 30 years after the original master plan for the neighborhood was approved, and 15 years after the residents of Isawiyah drew up a new master plan at their own initiative, the Jerusalem Municipality announced that it would be putting forward a new master plan. However, the Interior Ministry is in no hurry to approve the plan, and in the meantime families continue to lose their homes.”

On the night after the demolition of Abu Riala’s home, police forces entered Isawiyah and the images of tension and violence returned to the village.