Former French president handed one year in prison and a two-year suspended sentence over corruption and influence peddling. 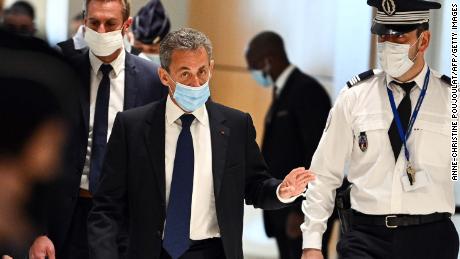 Former French president Nicolas Sarkozy arrives at the Paris court house to hear the final verdict in a corruption trial on March 1, 2021. – A French court is to hand down its verdict of guilty on March 1, 2021 in the corruption trial of Sarkozy accused of offering a plum job in Monaco to a judge in exchange for inside information on an inquiry into his campaign finances. CNN
(Photo by ANNE-CHRISTINE POUJOULAT/AFP via Getty Images)

1 Mar 2021 – A Paris court has found Nicolas Sarkozy, France’s former president, guilty of corruption and influence peddling, sentencing him to one year in prison and a two-year suspended sentence.

He is the second former president in modern France, after Jacques Chirac, to be convicted of corruption.

The 66-year-old politician, who served as president from 2007 to 2012, was convicted on Monday for having tried to illegally obtain information from a senior magistrate in 2014 about a legal action in which he was involved.

Sarkozy will appeal against the ruling, his lawyer told BFM television.

Prosecutors told the judges that Sarkozy had offered to secure a job in Monaco for judge Gilbert Azibert, in return for confidential information about an inquiry into allegations that he had accepted illegal payments from L’Oreal heiress Liliane Bettencourt for his 2007 presidential campaign.

This came to light while they were wiretapping conversations between Sarkozy and his lawyer Thierry Herzog after the right-wing leader left office. The wiretapping was carried out in relation to another investigation into alleged Libyan financing of the same campaign.

The court said Sarkozy, a former lawyer himself, was “perfectly informed” about committing such illegal action. His two co-defendants were also found guilty and handed the same sentence.

Sarkozy had denied any wrongdoing, saying he was the victim of a witch-hunt by financial prosecutors who used excessive means to snoop on his affairs. He has 10 days launch an appeal.

Taking into account the two years suspended, the one-year prison term means it is unlikely Sarkozy will physically go to prison, a punishment that in France usually applies to jail terms of above two years.

The court said Sarkozy will be entitled to request to be detained at home with an electronic bracelet.

Sarkozy will face another trial later this month along with 13 other people on charges of illegal financing of his 2012 presidential campaign.

Al Jazeera’s Natacha Butler, reporting from Paris, said the ruling could spell the end of his national political career.

Butler said Sarkozy’s reputation was now “in tatters”, adding the court’s decision was a “devastating blow” to any political ambitions he may still harbour.

“It is hard to imagine that a former president with a jail sentence to contend with could possibly take the centre stage once again politically,” she said.

‘You won’t hear about me any more’

During his five-year term, Sarkozy took a hard line on immigration, security and national identity.

After winning the presidency at age 52, Sarkozy was initially seen as injecting a much-needed dose of dynamism, making a splash on the international scene and wooing the corporate world.

But his presidency was overshadowed by the 2008 financial crisis, and he left office with the lowest popularity ratings of any previous post-war French leader.

After his humiliating defeat in the 2012 presidential race to Socialist Francois Hollande – making him the first president since Valery Giscard d’Estaing (1974-81) to be denied a second term – Sarkozy famously promised: “You won’t hear about me any more.”

That prediction turned out to be premature.

His continuing legal problems and marriage to former top model Carla Bruni have ensured the man known as “Sarko” remained very much in the public eye.

Few were surprised when he returned to front-line politics in 2014, winning the leadership of the conservative UMP party, since being renamed Les Republicains (LR).

He made a fresh bid for the presidency in 2016, trying to bury the “bling-bling” image he gained for his love of the high-life, and casting himself as a defender of the down-and-outs against the elites.

Sarkozy did not even make it past the LR party’s primaries but despite the defeat, he has remained hugely popular on the right.

“I have a special link with the French. It may stretch, it may tighten, but it exists,” the ex-president said at the time.

Even now, with no obvious candidate on the right to take on President Emmanuel Macron in 2022, there remained whispers that Sarkozy could yet want another crack at the presidency.

But the conviction will likely end all such speculation.

A litany of other legal woes lies ahead: on March 17 he is scheduled to face a second trial over accusations of fraudulently overspending in his failed 2012 re-election bid.

He has also been charged over allegations he received millions of euros from Libyan leader Muammar Gaddafi for his 2007 election campaign.

In January, prosecutors opened another probe into alleged influence-peddling by Sarkozy over his advisory activities in Russia.

Sarkozy denies the allegations and has accused the judiciary of hounding him.