Humanity hasn’t really done a great job when it comes to energy production. We are able to meet our needs but at the cost of polluting the environment with waste and releasing several billion tons of carbon dioxide into Earth’s atmosphere (Levin, 2018). Scientists are all but certain that this is the reason why clear signs of climate change are being observed every day. Moreover, such energy reserves like oil and gas are actually relatively limited in supply and will one day, without a doubt, run dry (Hodgson, 2008). What if I were to tell you that there is a way of solving the problems of fuel supply, waste and climate change all in one? What I speak of is no fairy tale but actual science; this is the exciting field of fusion power. While yet to be commercialized, it is clear that fusion has the potential to be a great alternative even to renewable energy sources due to its lack of harmful emissions and of radioactive waste, its abundant fuel stores and consistency (Whyte, 2016). 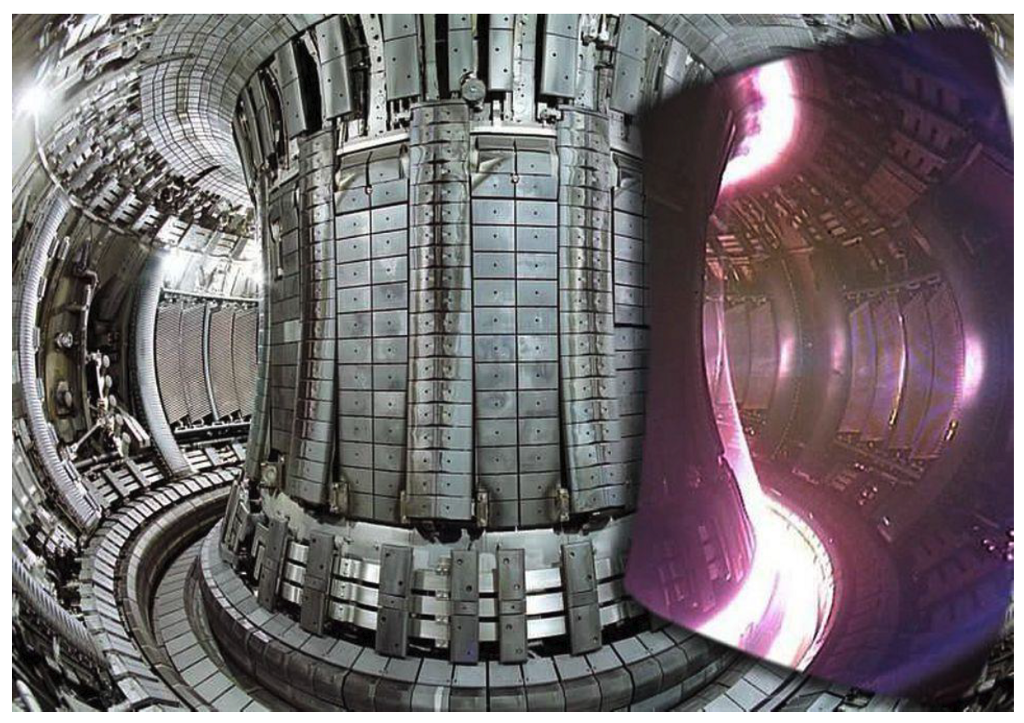 The inside of a fusion reactor; glow on the right is plasma from atoms combining.

Fusion is the physical process by which atoms release energy when they are forced together into bigger atoms. This is the energy that drives the sun and an idea first conceived by Arthur Eddington in the early 20th century (Eddington, 1920). As mentioned above, the drawbacks of fossil fuels are now very well known to the public. According to an environmental expert in Canada, “Electricity generation produces a large share of Canadian nitrogen oxides and sulphur dioxide emissions, which contribute to smog and acid rain and the formation of fine particulate matter” (Environment Canada, 2004). 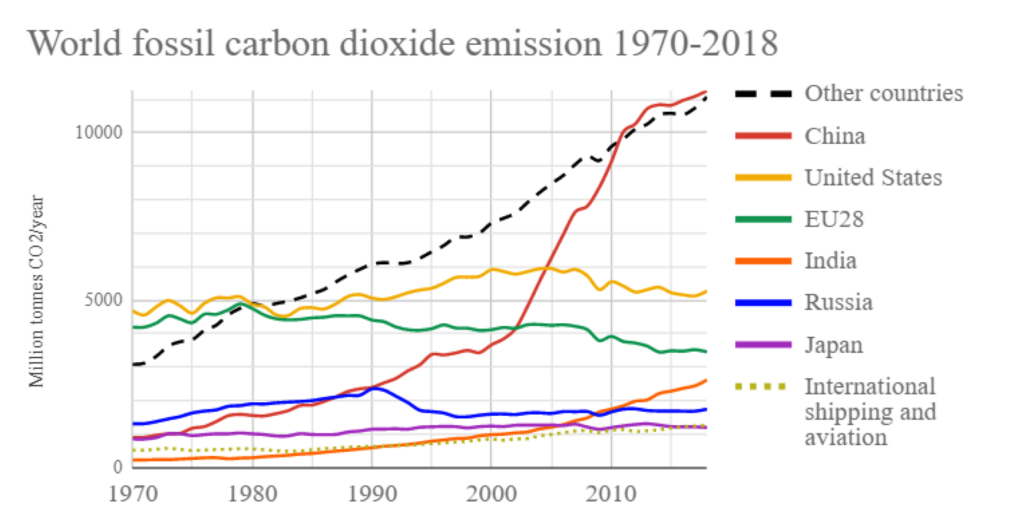 In this figure we can see the general upward trend of CO2 emissions by country.

Even renewable energy, which despite making great strides in combating the effects of fossil fuels, have drawbacks. For example, wind farms can disrupt the ecosystem around, most notably by messing with bird migration patterns (Metcalfe, 2018). Furthermore, solar panels are incredibly expensive and very inefficient. Both forms of energy fall victim to inconsistency in non-favorable, conditions e.g. lack of wind for windmills or overcast sky and night darkness for solar panels. Thus, scientists and engineers are still thinking of practical ways to store energy during these ‘off’ times.

The other half of nuclear energy — the well-established nuclear fission — has proven itself to be a commercially viable alternative to fossil fuels. Instead of fusing lighter atoms together, it focuses on splitting them apart and is responsible for about 20% of all the electricity in the United States. However, it too has problems, including limited fuel and the production of radioactive waste that takes thousands of years to ‘cool down.’ Currently, our solution is to simply bury them deep into the earth or ocean. However, there is no guarantee that our containments would not be disrupted over the next few millennia, meaning potential exposure to the environment. This is where fusion comes in.

The sun is a natural fusion reactor. On the right is the Fusion reaction of greatest interest: D-T.

Firstly, fusion power barely releases any CO2, in fact, there is no direct release of carbon dioxide whatsoever (Whyte, 2016). The most promising avenue of fusion is the use of hydrogen isotopes called deuterium and tritium (D-T) to fuse into lithium and helium, a very simple reaction that involves no carbon dioxide. The plant would even supply its own power, leaving very few places where CO2 emissions could be of concern. Indeed, the only way carbon dioxide is involved are the transport vehicles bring the fuel to the plant! This has ensued a battle on a related but altogether separate front i.e. the electrification of automobiles, pursued by industrial giants such as Tesla. Speaking of fuel for fusion reaction, as noted above deuterium and tritium are the two ingredients for fusion. Deuterium is readily found in seawater and can be easily isolated and extracted with today’s technology. In fact, we have enough of the stuff to last well after the earth is subsumed by the Sun some 7 billion years from now. As for tritium, this isotope is much rarer, however, the genius of the fusion reaction is that the neutron produced can be used with lithium to ‘breed’ tritium. Effectively, the raw materials coming into the plant are deuterium and lithium, the latter being relatively abundant (comparable to Chlorine in the earth’s crust). What is relevant about this reaction is the fact that it does not directly produce radioactive fuel as waste, as does our current nuclear energy. In fission reactors, very large atoms such as uranium is split into smaller atoms such as Krypton and Barium, which split further and further until radioactive nuclei are all that result. In fusion, the products again are simply lithium and helium gas, the former being reused for the reaction and the latter coming in handy in a world, where helium is becoming more and more scarce. An additional bonus that is made apparent through the comparison with fission plants is that there is no possibility for a nuclear meltdown in fusion plants. Interrupting or tampering with the reaction simply returns the hot plasma at its center to regular gas. 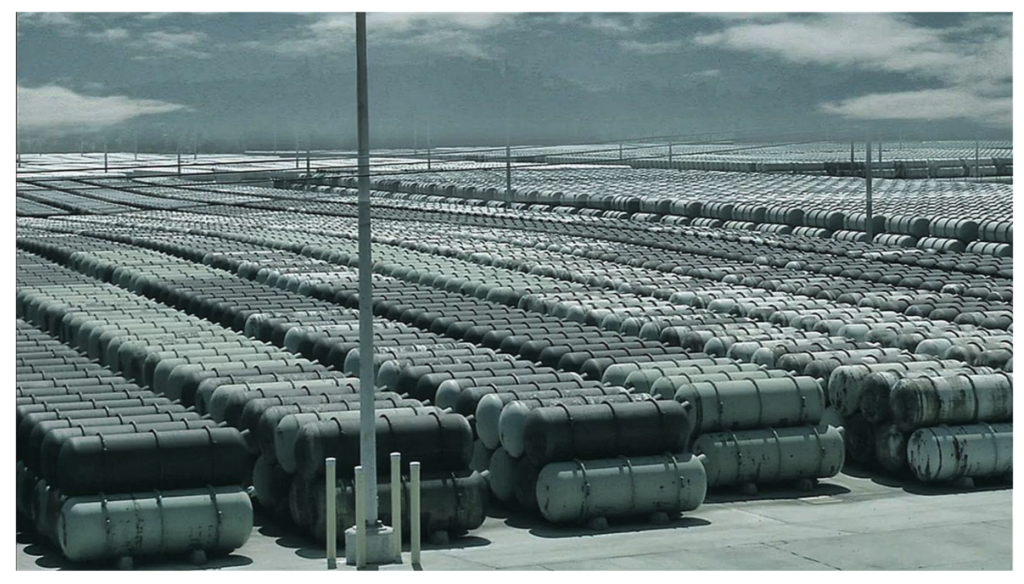 ‘Spent’ nuclear fuel of Fission power plants seen here collected in Paducah, Kentucky. Fusion would have no reason for these collection facilities.

Finally, unlike renewables such as solar and wind, nuclear fusion is not at the mercy of environmental conditions meaning it can be controlled to always meet energy demand. With the supply of fuel abundant, fission plants (or for that matter fossil fuel plants) would work analogously to fission without interruption from external factors. Conveniently, the fuel for fusion has extremely high energy density meaning that a very small amount of fuel produces a very large amount of energy: one spoon of seawater has about as much energy as a barrel of oil.

“Nuclear fusion is not at the mercy of environmental conditions meaning it can be controlled to always meet energy demand.”

With all these benefits you might be asking, where’s the fusion already? The reason the sun and indeed the stars can fuse atoms together comes down to tremendous gravity. Since we do not have that option on Earth we have to rely on other methods. One method is using perfectly aligned lasers to simultaneously impact a pellet of fuel, which would ignite the fusion in a process called ‘inertial confinement’. This is exactly the objective of Lawrence Livermore National Lab’s National Ignition Facility (or NIF). So far, they have been able to produce some fusion energy but it requires many times more energy to power the facility than what they get from the fusion reaction.

Another scheme is ‘magnetic confinement’ in which the deuterium and tritium are confined by magnets and heated to a hundred million degrees by powerful sources. This heat and magnetic force essentially cause the fusion of the atoms and the release of energy. A common approach is that of the ‘Tokamak’, where magnets form a donut shape the inside of which the plasma would circulate. Many experiments have been carried out in these Tokamaks all over the world, the largest currently being built in France, known as ITER. The truth is we just have not had the technology (mainly strong enough magnets and big enough reactors) to accomplish a ‘breakeven’ reaction where more power is extracted than that put in. ITER, however, is the largest, most expensive and most technologically advanced scientific experiment in the history of mankind (Rebut, 1995). Currently, it is believed that this will be the first true reactor in the world with a projected output/input factor of 10! 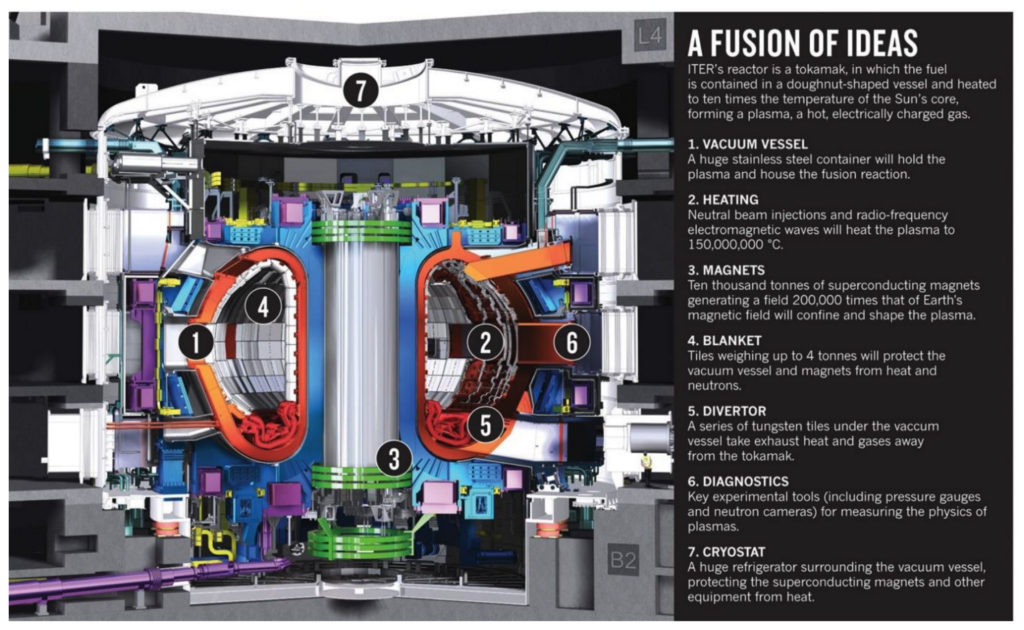 Schematic of ITER, the largest fusion undertaken in history, with key parts annotated.

This reactor and others using newer, stronger magnets are indeed in the works. New kinds of magnets made of ‘superconductors’ will be used to squeeze atoms together with more force than ever before. However, all things considered we are still at least a couple of decades away from fusion power actually hitting the grid. This is simply because fusion by nature is one of the most challenging engineering endeavors man has ever undertaken. However, more and more students — like myself — are dedicating careers to fusion, and scientists and engineers are working harder than ever to make this dream a reality.