Keep Victoire Ingabire in Your Hearts 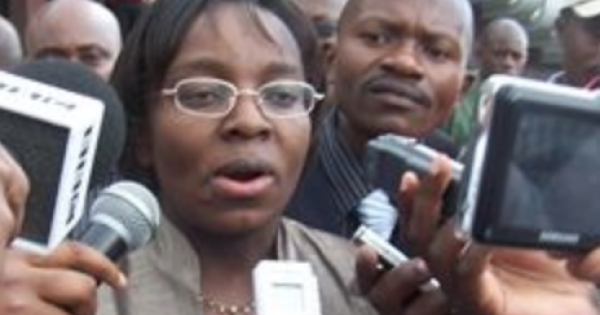 Photo: Victoire Ingabire Umuhoza upon her arrival at Kigali International Airport in January 2010.

8 Mar 2021 – At the outset of International Women’s History Month, I’d like to ask Black Star News readers to remember and keep in their hearts one of the most courageous women I know, Rwandan political prisoner Victoire Ingabire Umuhoza. Though Victoire was released from Rwanda’s 1930 Prison in 2018, she remains under tight surveillance and forbidden to leave Rwanda. Just over a year ago her fellow prisoner, gospel singer Kizito Mihigo, was apprehended while trying to escape across Rwanda’s southern border into Burundi and then reported to have committed suicide by hanging in a jail cell.

In January 2010, Victoire returned to Rwanda from exile in the Netherlands to run for president against Paul Kagame, the former general turned president who has ruled Rwanda with an iron fist since seizing power at the end of the 1990-1994 Rwandan Civil War. Between 300,000 and a million Rwandans are thought to have died in the Rwandan war and the final 90 days of massacres that came to be known as the Rwandan Genocide. Before Victoire’s return, the world had known the Rwandan Genocide largely in racist stereotypes of bloodthirsty Hutu killers slaughtering innocent Tutsis. Victoire, an ethic Hutu, challenged this narrative upon her return to Rwanda, where Kagame’s minority Tutsi dictatorship enforces the legally codified description “genocide against the Tutsi.” She risked her life to establish that Hutu people were also killed by the Tutsi army, before, during, and after the genocide, and that Rwandans will never truly reconcile unless the truth is acknowledged and all the victims are mourned.

The 2010 UN Mapping Report on the Democratic Republic of the Congo documented the massacre of Hutu refugees who fled into DRC as Kagame advanced to seize power, and Canadian investigative journalist Judi Rever, among others, has documented the massacre of Hutu civilians throughout the Rwandan Civil War in her book “In Praise of Blood: Crimes of the Rwandan Patriotic Front.” Rever’s book also documents the role of Western powers, most of all the US, in engineering these wars for the sake of access to DRC’s vast resources.

Victoire was not allowed to run against President Kagame in 2010. Instead she went to prison for eight years for challenging Rwanda’s legally enforced history. However, her courage radically changed the world’s perception of Rwanda’s 1994 tragedy, Kagame’s government, and the catastrophic resource war in the Democratic Republic of the Congo, which began when Kagame and Ugandan President Yoweri Museveni used the Rwandan Genocide as an excuse to invade, occupy, and plunder DRC, claiming that they had to pursue Hutu genocide criminals.

In 2011, the Women’s International Network for Democracy and Peace created the Victoire Ingabire Umuhoza Democracy and Peace Prize, which has been presented to human rights activists and investigative journalists contributing to peace in the African Great Lakes Region every year since. Here is Victoire’s address to last year’s Zoom awards celebration via video link from Kigali, Rwanda:

“Good evening everybody. My thanks go to the International Women’s Network for Democracy and Peace, who invited me to participate in this evening. I thank them again for the brilliant idea of creating this award to be granted to anyone who peacefully militates for the promotion of peace and democracy in the countries of the African Great Lakes Region. I thank all the members of the jury for the prize, for their availability, and their impeccable work. Specifically, I ask you to help me applaud Mrs. Marie-Roger Biloa, Mr. Juan Carrera, and Mrs. Thérèse Sbolgi.

“Since I have been involved in the political struggle for the democratization of my country and the stability of the countries in the African Great Lakes Region, I have witnessed Mrs. Marie-Roger Biloa fighting like a lioness to ensure that the world gets the real picture of violent conflict in the Great Lakes Region. I was quite pleased to read in the letter that Juan Carrera wrote to Paul Rusesabagina’s daughter, where he denounced some human rights organizations which wear double hats. On one side, they denounce human rights violations and, on the other hand, campaign for war in Syria or Libya, or even distort the truth of the crimes committed in the countries of the Great Lakes Region.

“First, the countries of the Great Lakes Region must be democratized. Democracy is about more than holding elections. In a democracy, minority voices are heard and they are respected. Opposition candidates present their political programs to the electorate without threat or intimidation, and the freedom of expression and the freedom of press are protected. The people of the countries of the Great Lakes Region of Africa need to participate actively in the decisions and definition of policies that affect them.

“Secondly, we must approach an end to the impunity that has been exercised in the countries of the Great Lakes for decades. In this regard, I congratulate the Congolese people who are campaigning today for an international tribunal to prosecute crimes committed in DRC.

“And finally, the last step, there needs to be a transparent approach to economic interests in the region. For example, the people of the DRC must be the first beneficiaries of their resources by doing clean business with the other people in the region and the rest of the world in a win-win position. However, security conditions must be met beforehand to ensure a safe environment for any business activity.

“Today we live in a world where might is right. The right of the strong prevails. But, as Rousseau has clearly explained, force does not make law. We all know that strength needs the law to hide its weakness and that strength is never strong enough to always be the master.

“Today, more than ever before, there is a great conflict between good and evil, between trust and lies. However, I hope you share with me the conviction that good will eventually win against evil and that the countries of the Great Lakes Region of Africa will rise and shine again one day as they deserve.