Lula Is Back, and Brazil Is Facing a Perfect Storm

The annulment of the corruption convictions against former President Lula threw the country into unprecedented political chaos. 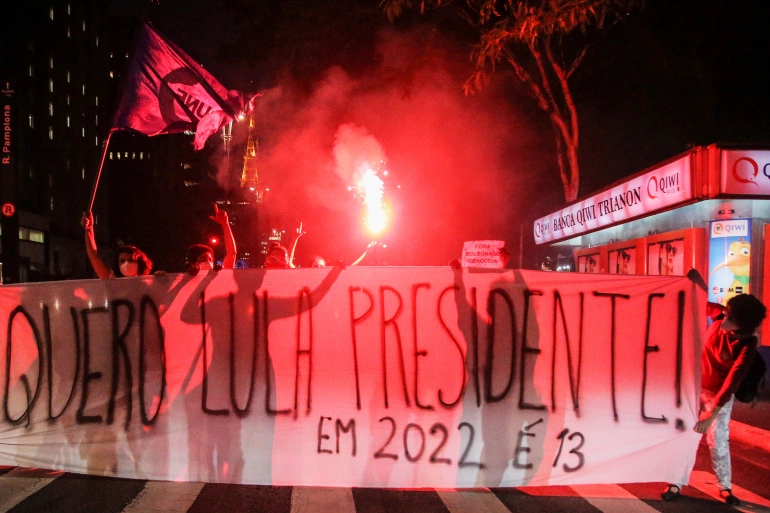 25 Mar 2021 – The past year has been catastrophic for Brazil. The country not only lost 300,000 people to COVID-19 but also found itself in a deep political and economic crisis.

President Jair Bolsonaro, whose anti-science response to the pandemic led to calls for him to be tried for crimes against humanity at the International Criminal Court, is facing increasing pressure from governors across the country to start taking the crisis seriously and ramp up vaccination. The far-right president’s supporters, meanwhile, are regularly protesting in large numbers against the measures put in place by governors to stem the spread of the virus. The crisis has also had a significant negative impact on the country’s economy. The unemployment rate is expected to stand at 14.6 percent in 2021 – the highest in the country’s recent history.

Bolsonaro responded to the mounting criticism of his pandemic policies and discourse by using legislation from the military dictatorship period to persecute and intimidate his opponents. He also tried to blame his administration’s inability to contain the virus on the judiciary, baselessly claiming that the Brazilian Supreme Federal Court has prevented him from introducing effective public health measures.

All in all, COVID-19 and Bolsonaro’s not only inadequate but almost criminal handling of it left Brazil in such economic, social and political chaos that most Brazilians were convinced that things cannot possibly get worse for the country.

Soon, however, they were proven wrong.

On March 8, Supreme Court Justice Edson Fachin annulled the corruption convictions against leftist former President Luiz Inacio Lula da Silva, citing a jurisdictional issue with the court that heard the case, and saying he must be retried in a court in Brasilia, the capital.

The decision raised serious questions about the legitimacy of “Operation Car Wash”, the massive anti-corruption investigation that led to Lula’s convictions, and opened the door for Lula to run in the 2022 presidential election. And all this spiralled the country into a deeper political crisis.

The former president had been convicted in three different cases connected to Car Wash. In 2017, then-federal Judge Sérgio Moro sentenced Lula to 9 years and 6 months in prison for corruption and money laundering. After his arrest in April 2018, the former president spent 580 days in prison. He was eventually released in November 2019 following a Supreme Court decision to end mandatory imprisonment of convicted criminals after their first appeal failed.

Lula’s criminal conviction, which left him unable to run for political office, benefited Bolsonaro immensely. In the 2018 election, he avoided running against Lula, who was leading in the polls, and instead scored a relatively easy victory against his last-minute replacement, Fernando Haddad. Moreover, Lula’s lifelong ban from politics increased Bolsonaro’s chances of reelection.

But Justice Fachin’s March 8 decision drastically changed the game. Now there is a chance that the incumbent president who is responsible for Brazil’s COVID-19 devastation will face a former president who is still seen as deeply corrupt by millions of Brazilians in the 2022 presidential election. While Lula’s potential candidacy may harm Bolsonaro’s chances for re-election, it can also divide the opposition and allow him to clinch another electoral victory despite his many failings.

But Lula’s unexpected return to the Brazilian political arena is only one drop in the storm caused by Fachin’s decision.

Following the annulment of Lula’s conviction, all eyes in Brazil turned to Moro, one of the head justices in Operation Car Wash who presided over Lula’s trial.

Initially, Moro was widely celebrated for sending a political figure as powerful as Lula to prison for corruption. But merely a few months after the start of Lula’s short stint in prison, newly-elected Bolsonaro announced that Moro would serve as his minister of justice and public security, raising concerns that the conviction of the former president might have been biased and politically motivated. In June 2019, messages leaked to Intercept Brazil showed that Moro “offered strategic advice to prosecutors and passed on tips for new avenues of investigation” during Lula’s trial, adding further weight to these concerns.

In April 2020, Bolsonaro had a very public falling out with Moro after he accused the president of “meddling” and left the government. In response, Bolsonaro declared Brazil to be “corruption-free” and officially ended Operation Car Wash.

Nevertheless, the evidence against Lula still appeared to be strong, and the apparent unethical collusion between the prosecutors and Moro, or Bolsonaro’s claim that Operation Car Wash is no longer needed, did not turn public opinion against the probe.

The decision to annul Lula’s conviction, however, may change all this and prove to be the final nail in the huge anti-corruption operation’s coffin.

Justice Fachin did not actually exonerate Lula. He simply ruled that the court that convicted him did not have jurisdiction to do so. This means Lula will still be tried, and may be convicted, for the same crimes by another court that has jurisdiction. Nevertheless, Lula’s supporters treated the decision as an acquittal and presented it to the public as proof of the former president’s innocence.

This not only added to the gradual erosion of Operation Car Wash’s legitimacy but also helped convince many in Brazil that the judiciary is not an impartial but a highly political institution. The Supreme Court’s March 23 ruling that Moro was “biased” in convicting Lula in one of the three cases, and annulling the evidence used against him in the trial, has only deepened this conviction.

On paper, the judiciary’s efforts to correct its mistakes should have strengthened the gains made by Operation Car Wash and increased the public’s trust in the judicial system.

Due to Brazil’s complex political environment, however, it ended up doing exactly the opposite. Not only the Worker’s Party but also Bolsonaro and his supporters used the move to undermine the judiciary. The Worker’s Party claimed that the annulment of the former president’s conviction demonstrated how Brazilian courts in general, and Operation Car Wash in particular, are political tools. The Bolsonaro camp, which has long treated the Supreme Court as an enemy, meanwhile, presented the decision as proof that the Court is defending criminals and corrupt politicians like Lula for political reasons.

In short, Fachin’s decision to annul Lula’s conviction, even if it was genuinely aimed at protecting the rule of law and the legitimacy of Operation Car Wash, threw the country into unprecedented political chaos. It rekindled old animosities and toxic political rivalries during one of the country’s worst moments. It might erase the legitimate gains made by Operation Car Wash, and bring Brazil’s fight against graft back to square one. More importantly, it presented an opportunity to all corrupt politicians to present any legal scrutiny they face for their conduct as a political and baseless attack.

Raphael Tsavkko Garcia – Brazilian journalist and researcher. He holds a PhD in Human Rights from the University of Deusto.