Immigration chief says the group was sent back on three Myanmar navy ships and do not include Rohingya or asylum seekers. 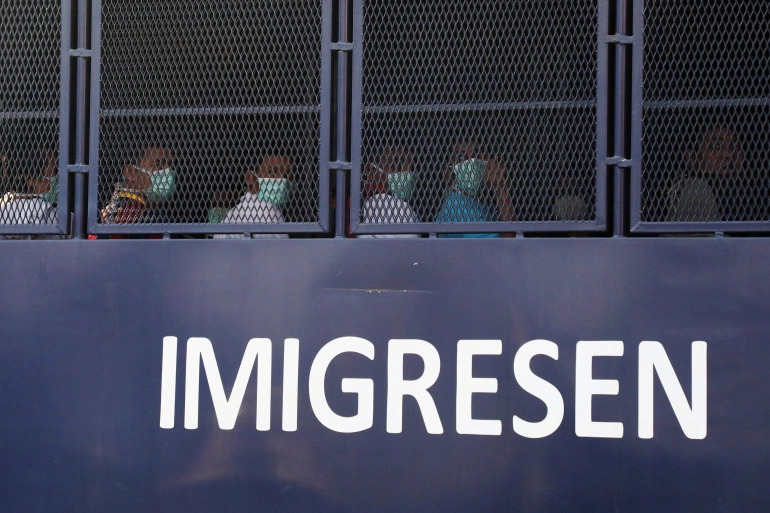 23 Feb 2021 – Malaysia has deported 1,086 Myanmar nationals, despite a court order temporarily halting the repatriation amid concerns the group could be at risk if they are returned to military-ruled Myanmar.

Kairul Dzaimee Daud, director-general of Malaysia’s immigration department, said on Tuesday the group had agreed to return voluntarily and were sent back on three ships belonging to Myanmar’s navy.

The move came hours after the Kuala Lumpur High Court granted an interim stay barring the removal of some 1,200 people until 10am (02:00 GMT) on Wednesday.

The order was issued in response to a request for a judicial review from Amnesty International and Asylum Access, who said the lives of the people in the group would be at risk and that more than a dozen of the detainees were children with at least one parent in Malaysia.

Daud said those sent back were all Myanmar nationals who were detained last year and did not include asylum-seekers or any refugees from the persecuted Rohingya minority.

“All of those who have been deported agreed to return of their own free will, without being forced,” the immigration chief said in his statement.

The statement did not mention the court order or explain why only 1,086 were deported instead of 1,200.

Amnesty International Malaysia’s Executive Director Katrina Jorene Maliamauv said earlier that the court would hear its appeal on Wednesday and urged Malaysia to grant the UNHCR access to the group to verify any asylum claims.

“The government must respect the court order and ensure not one of the 1,200 individuals is deported today,” she said in a statement following the court ruling.

The two organisations said earlier that sending the group to Myanmar, where the military seized power on February 1 was “a cruel act that violates the international principle of non-refoulement”.

We have submitted a letter to the Prime Minister’s Office @MuhyiddinYassin reiterating your concerns and opposition to the planned deportation. pic.twitter.com/j1MBMCFrK6

Tham Hui Ying, executive director of Asylum Access, said returning the children would breach Malaysia’s commitments under the Convention on the Rights of the Child, and its own Child Act that “clearly states the government’s responsibility to protect children”.

Myanmar has been rocked by mass protests calling for the restoration of democracy since the military seized control of the country and detained elected leaders including State Counsellor Aung San Suu Kyi and President Win Myint. Malaysia was among a handful of countries in the region to express concern about the military’s move.

“As the world condemns the political violence in Myanmar, we are appalled to note that the Malaysian government has instead chosen to send 1,200 individuals to a rapidly deteriorating situation,” Amnesty and Asylum Access said.

Amnesty International also sent a letter of appeal to Prime Minister Muhyiddin Yassin on Tuesday, stressing the scale of “public opposition” to the planned deportation. It said it had received more than 1,000 letters calling on Malaysia to stop the removal.

Malaysia is home to millions of migrants from around the region – documented and undocumented – who often work in the kind of poorly paid jobs Malaysians do not want to do.

There are also nearly 180,000 refugees and asylum-seekers, according to the UNHCR, the United Nations’ refugee agency.The vast majority are from Myanmar, including 102,250 Rohingya, as well as tens of thousands from other ethnic minority groups who have fled conflict in their homeland.

They are also at risk of being detained as “undocumented” migrants because Malaysia is not a signatory to the UN Convention on Refugees. The UN refugee agency has not been able to visit immigration detention centres in the country since August 2019.

“This is a time to extend protection to people fleeing Myanmar and grant the UN access, not put them into the hands of a military junta with a long track record of serious human rights violations,” Amy Smith, executive director of Fortify Rights, said in a statement calling on Malaysia to stop the deportation.

“This plan puts lives at risk and gives undeserving legitimacy to the abusive military coup in Myanmar.”