16 Mar 2021 – The first leaders’ summit of the Quadrilateral Security Dialogue or Quad, which took place online on Friday [12 Mar], has dramatically raised the stakes in the accelerating US-led war drive against China. While the Quad is not yet a formal military alliance, the Biden administration clearly views the consolidation of the partnership as a central element in its efforts to undermine, encircle and prepare for military conflict against China. 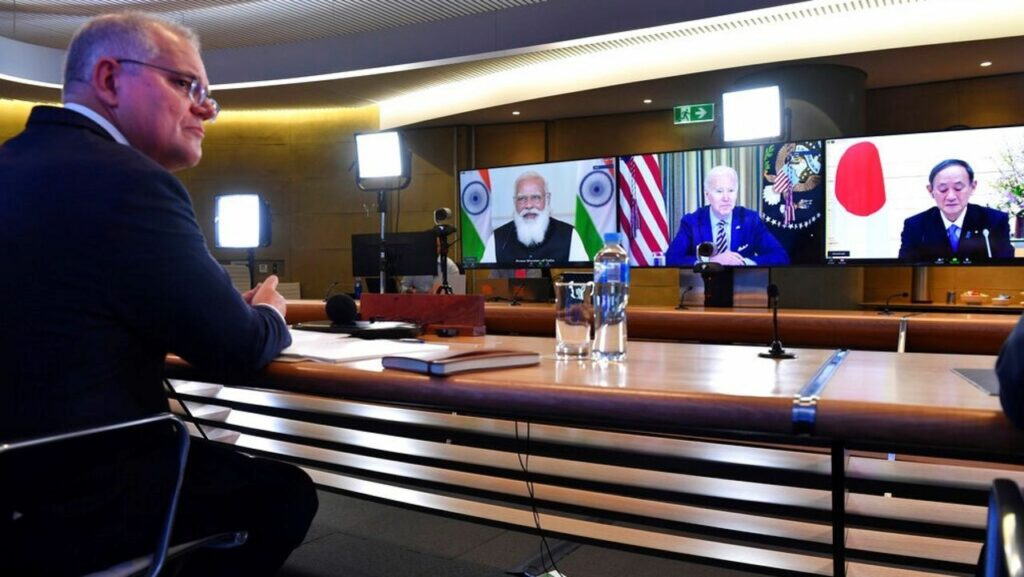 The summit not only issued a formal statement. Unusually also, Biden and the prime ministers of India, Australia and Japan—Narendra Modi, Scott Morrison and Yoshihide Suga respectively—put their names to an opinion piece published prominently in the Washington Post on Sunday [14 Mar]. The comment is replete with cynical motherhood statements about their advocacy of democracy, action on climate change and COVID-19 vaccines, and commitment to “an Indo-Pacific region that is free, open, secure and prosperous.”

However, while China is not mentioned, it dominated the discussion at the summit. The pledges by the four leaders to pursue regional co-operation, partnership and engagement do not, of course, extend to Beijing. Buried in the various public statements were thinly-veiled references to Chinese coercion—from the US that has routinely waged war and ousted governments to advance its imperialist interests—and the need to uphold “freedom of navigation”—that is, for the US Navy to provocatively intrude into waters around Chinese-controlled islets in the South China Sea.

The Washington Post comment includes a fanciful history of the Quad—supposedly borne out of the cooperation of the four countries in response to the catastrophic 2004 tsunami in Asia. “Our cooperation, known as the Quad, was born in crisis. It became a diplomatic dialogue in 2007 and was reborn in 2017,” the leaders write. How and why it mysteriously disappeared, and reappeared a decade later, is left unexplained.

Yet the genesis of the Quad is very revealing. It did not begin with the tsunami but with the election of the right-wing Japanese politician Shinzo Abe as prime minister in 2006. He called for enhancing the US-Japan military alliance by forging close partnerships with India and Australia. The plan was driven by growing concerns in the Japanese ruling class about China, which was about to overtake Japan as the world’s second largest economy. The Bush administration, under fire from the Democrats for inaction over China, seized on the proposal and the first official meeting took place in May 2007. Its military purpose was underscored in September 2007 by the expansion of the annual US-India Malabar naval war games to include the navies of Australia and Japan.

Beijing protested against the formation of what was emerging as a military alliance in the Indo-Pacific targeting China. The Quad ignominiously collapsed months later in February 2008 when the newly-elected Labor government of Prime Minister Kevin Rudd, concerned about relations with Australia’s largest trading partner and the danger of war, abruptly withdrew from the dialogue. Foreign Minister Steven Smith underscored the Canberra’s determination not to join a grouping that could be construed as anti-Chinese by making the announcement while standing alongside Chinese Foreign Minister Yang Jiechi.

Rudd’s withdrawal from the Quad was just one of the “crimes” for which he was ousted in a US-orchestrated regime-change operation in June 2010. While he was fully committed to the US-Australian alliance, Rudd’s advocacy of the US making compromises with China to avert war came into conflict with the thrust of the Obama administration’s policy to confront China. Rudd was summarily removed as prime minister by four key Labor powerbrokers, later revealed by WikiLeaks to be “protected sources” of the US embassy in Canberra, in an operation that kept, not only the public, but Labor ministers and party members in the dark.

The following year, in November 2011, Obama, who had twice called off visits to Australia when Rudd was in office, announced his “pivot to Asia” strategy directed against China. Unveiled by Obama in the Australian parliament, the “pivot” involved comprehensive diplomatic, economic and strategic plans to undermine and encircle China throughout the region. Militarily, the Pentagon foreshadowed the restructuring of US bases in the region, the strengthening of alliances and strategic partnerships and the transfer of 60 percent of its naval and air assets to Asia. While in Australia, Obama and a fawning Prime Minister Julia Gillard signed an agreement to station US Marines in the country’s north.

Biden, as vice president under Obama and former chair of the influential Senate Foreign Relations Committee, was closely involved in all these machinations. By convening last Friday’s summit, he elevated the Quad to a new level, demonstrating that his administration will intensify the aggressive anti-China stance of the Obama and Trump administrations. The Quad, which was revived under Trump, is about to play a far more prominent role, with regular ministerial-level meetings, a face-to-face summit later this year, and a further expansion of joint military exercises.

None of the strategic commentators on the Quad is under any misapprehension that it is targeting China. It is already a quasi-military alliance engaged in a range of annual war games. Australia and Japan are longstanding military allies of the US, while India has forged intimate ties through a strategic partnership that includes comprehensive basing arrangements and technological assistance.

In the lead-up to the Quad summit, Trump’s former Defence Secretary James “mad-dog” Mattis and two other military analysts wrote a comment for Foreign Policy entitled “Getting the Quad right is Biden’s most important job.” It said “the Quadrilateral Security Dialogue is the best hope for standing up to China.” It declared that Biden faced “a resurgent China, more confident than it was before the COVID-19 pandemic” and praised him for continuing Trump’s initiative in reviving the Quad.

The comment identified four areas where the Quad had to take action: to counter China in the South China and East China Seas; to ensure “supply-chain security”—that is, to guarantee access to vital imports necessary to fight a war; to maintain the technological edge over China particularly in crucial hi-tech areas; and to enhance diplomatic ties throughout Asia, “in ways not possible for Washington alone.” All four areas were referred to, if only obliquely, in the joint statement issued by the Quad leaders. Each item has been a preoccupation of the US military as it prepares to fight what would be a war between nuclear-armed powers with incalculable consequences.

Over the past decade, the US plans for war against China have been more and more evident: from the steady military build-up throughout the Indo-Pacific, including anti-ballistic systems designed for fighting a nuclear war, to the increasingly strident and bellicose anti-Chinese propaganda, featuring fraudulent “human rights” campaigns over Xinjiang, Tibet, Mongolia, Hong Kong and Taiwan aimed, above all, at weakening and fracturing China.

In the lead-up to the Quad summit, the head of the US Indo-Pacific command, Admiral Philip Davidson testified to the US Congress. He called for a doubling of the Pentagon’s budget for the region and predicted that the US could face war with China within five years. The headlong plunge toward war by US imperialism is driven by the fear in Washington that China is overtaking it economically and technologically, as well as by the need to direct the tensions fuelled by the profound political and social crisis at home outward against an external enemy.

The World Socialist Web Site and the International Committee of the Fourth International (ICFI) have been alone in warning the working class of growing danger of a disastrous world war and calling for a unified international anti-war movement of workers. In its powerful statement entitled “Socialism and the Fight Against War” issued in February 2016, the ICFI outlined the principles that have to animate such a movement:

We urge workers and young people who want to discuss these issues and join in the struggle to build such an international anti-war movement to contact us.

Peter Symonds is a member of the International Editorial Board of the World Socialist Web Site and its national editor in Australia. Since the launch of the WSWS in 1998, Symonds has played a leading role in its analysis of political and social developments in Asia, Australia and the South Pacific.