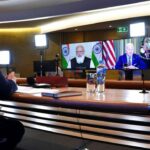 The first leaders’ summit of the Quadrilateral Security Dialogue or Quad, online on Friday [12 Mar], has raised the stakes in the US-led war drive against China. The summit not only issued a formal statement, but Biden and the prime ministers of India, Australia and Japan put their names to an opinion piece published prominently in the Washington Post on Sunday[14 Mar].

1 Apr 2017 – Japan’s ruling Liberal Democratic Party has called on the government to boost the country’s anti-ballistic missile systems and to consider acquiring, for the first time, weapons capable of carrying out attacks on enemy bases. The recommendations are another step towards the remilitarisation of Japan pressed by Prime Minister Shinzo Abe that is adding to sharp regional tensions.

The hypocrisy involved is staggering. The United States has nothing but contempt for international law and has never been called to account by any UN tribunal for its illegal wars in Afghanistan, Iraq, Syria and Libya, which have resulted in the deaths of millions. As part of its “pivot to Asia” against China, the Obama administration is chiefly responsible for transforming longstanding, low-key regional disputes in the South China Sea into a dangerous flashpoint that threatens to trigger a new and even more devastating war.

30 Apr 2016 – The Pentagon’s final report into last October’s deadly US airstrike on a Doctors Without Borders (MSF) hospital in northern Afghanistan is a brazen whitewash. General Joseph Votel, commander of US Central Command, told a press conference yesterday that the attack was not a war crime because it had not been intentional. He claimed that neither the gunship crew members nor the Special Forces on the ground directing the attack “knew they were striking a medical facility.”

26 Nov 2014 – In a direct intrusion into territorial disputes in the South China Sea, the US has called on China to halt construction activity in the Spratly Islands. The comments, which Beijing has already rejected, will only exacerbate the already sharp tensions between China and its neighbours.

Angry Indonesian officials threatened to retaliate after a leaked document yesterday [18 Nov 2013] revealed that the Australian Signals Directorate illegally tapped the phones of Indonesian President Susilo Bambang Yudhoyono, his wife and other members of his inner circle. Jakarta has already recalled its ambassador to Canberra.

The Indonesian government is threatening to wind back intelligence sharing with Australia and the US after revelations last week, based on leaked documents provided by Edward Snowden, that their embassies in Jakarta were used as electronic listening posts for the US National Security Agency.

The latest NSA leaks have exposed US and Australian listening posts in diplomatic missions throughout Asia.

In a statement issued Thursday [13 June 2013], the Obama administration has declared that the Syrian regime of President Bashar al-Assad has violated “international norms” by using chemical weapons on multiple occasions over the past year. The claim is a transparent lie that will be used by the US and its European allies, Britain and France, as the pretext for arming their right-wing Islamist terrorist proxies and for military intervention.

This week’s [26 Mar 2012] gathering of world leaders at the Nuclear Security Summit in South Korea was the occasion for a great deal of cynical posturing about nuclear disarmament and world peace. What is under way is not nuclear disarmament, but an arms race. The key index of this new build up is not the absolute number of nuclear warheads, but the sophistication of the delivery systems and their ability to evade detection and defensive measures.

The Fukushima disaster has underscored the corrosive and corrupting character of the profit system. It is not nuclear technology as such that presents the danger, but the social and economic order under which it has developed. If nuclear power remains in the hands of private corporations and under the domination of the capitalist market, the environment and public health and safety will inevitably be subordinated to the drive for profit.