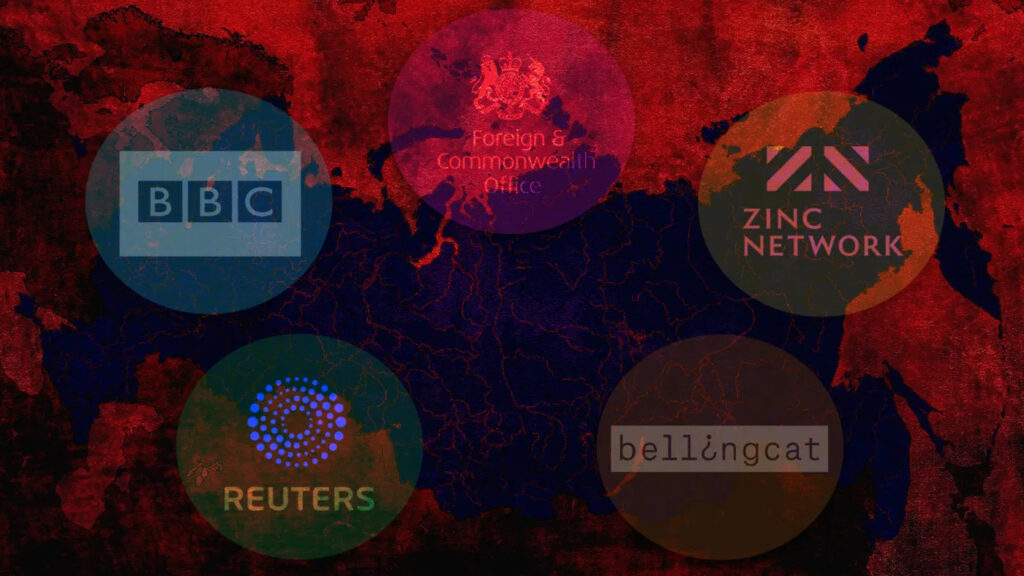 From The Gray Zone

20 Feb 2021 – The UK Foreign and Commonwealth Office (FCO) have sponsored Reuters and the BBC to conduct a series of covert programs aimed at promoting regime change inside Russia and undermining its government across Eastern Europe and Central Asia, according to a series of leaked documents.

The leaked materials show the Thomson Reuters Foundation and BBC Media Action participating in a covert information warfare campaign aimed at countering Russia. Working through a shadowy department within the UK FCO known as the Counter Disinformation & Media Development (CDMD), the media organizations operated alongside a collection of intelligence contractors in a secret entity known simply as “the Consortium.”

Through training programs of Russian journalists overseen by Reuters, the British Foreign Office sought to produce an “attitudinal change in the participants,” promoting a “positive impact” on their “perception of the UK.”

“These revelations show that when MPs were railing about Russia, British agents were using the BBC and Reuters to deploy precisely the same tactics that politicians and media commentators were accusing Russia of using,” Chris Williamson, a former UK Labour MP who attempted to apply public scrutiny to the CDMD’s covert activities and was stonewalled on national security grounds, told The Grayzone.

“The BBC and Reuters portray themselves as an unimpeachable, impartial, and authoritative source of world news,” Williamson continued, “but both are now hugely compromised by these disclosures. Double standards like this just bring establishment politicians and corporate media hacks into further disrepute.”

Thomson Reuters Foundation spokesperson Jenny Vereker implicitly confirmed the authenticity of the leaked documents in an emailed response to questions from The Grayzone. However, she contended, “The inference that the Thomson Reuters Foundation was engaged in ‘secret activities’ is inaccurate and misrepresents our work in the public interest. We have for decades openly supported a free press and have worked to help journalists globally to develop the skills needed to report with independence.”

The tranche of leaked files closely resemble UK FCO-related documented released between 2018 and 2020 by a hacking collective calling itself Anonymous. The same source has claimed credit for obtaining the latest round of documents.

The Grayzone reported in October 2020 on leaked materials released by Anonymous which exposed a massive propaganda campaign funded by the UK FCO to cultivate support for regime change in Syria. Soon after, the Foreign Office claimed its computer systems had been penetrated by hackers, thus confirming their authenticity.

The new leaks illustrate in alarming detail how Reuters and the BBC – two of the largest and most distinguished news organizations in the world – attempted to answer the British foreign ministry’s call for help in improving its “ability to respond and to promote our message across Russia,” and to “counter the Russian government’s narrative.” Among the UK FCO’s stated goals, according to the director of the CDMD, was to “weaken the Russian State’s influence on its near neighbours.”

Reuters and the BBC solicited multimillion-dollar contracts to advance the British state’s interventionist aims, promising to cultivate Russian journalists through FCO-funded tours and training sessions, establish influence networks in and around Russia, and promote pro-NATO narratives in Russian-speaking regions.

In several proposals to the British Foreign Office, Reuters boasted of a global influence network of 15,000 journalists and staff, including 400 inside Russia.

The UK FCO projects were carried out covertly, and in partnership with purportedly independent, high-profile online media outfits including Bellingcat, Meduza, and the Pussy Riot-founded Mediazona. Bellingcat’s participation apparently included a UK FCO intervention in North Macedonia’s 2019 elections on behalf of the pro-NATO candidate.

The intelligence contractors that oversaw that operation, the Zinc Network, boasted of establishing “a network of YouTubers in Russia and Central Asia” while “supporting participants [to] make and receive international payments without being registered as external sources of funding.” The firm also touted its ability to “activate a range of content” to support anti-government protests inside Russia.

The new documents provide critical background on the role of NATO member states like the UK in influencing the color revolution-style protests waged in Belarus in 2020, and raise unsettling questions about the intrigue and unrest surrounding jailed Russian opposition figure Alexei Navalny.

Further, the materials cast serious doubt on the independence of two of the world’s largest and most prestigious media organizations, revealing Reuters and the BBC as apparent intelligence cut-outs feasting at the trough of a British national security state that their news operations are increasingly averse to scrutinizing.

A series of official documents declassified in January 2020 revealed that Reuters was secretly funded by the British government throughout the 1960s and 1970s to assist an anti-Soviet propaganda organization run by the MI6 intelligence agency. The UK government used the BBC as a pass-through to conceal payments to the news group.

The revelation prompted a Reuters spokesman to declare that “the arrangement in 1969 [with the MI6] was not in keeping with our Trust Principles and we would not do this today.”

The Trust Principles outline a mission of “preserving [Reuters’] independence, integrity, and freedom from bias in the gathering and dissemination of information and news.”

In its own statement of values, the BBC proclaims, “Trust is the foundation of the BBC. We’re independent, impartial and honest.”

However, the newly leaked documents analyzed by The Grayzone appear to reveal that both Reuters and the BBC are engaged yet again in a non-transparent relationship with the UK’s foreign ministry to counter and undermine Russia.

In 2017, the non-profit arm of the Reuters media empire, the Thomson Reuters Foundation (TRF), delivered a formal tender offering to “enter into a Contract with the Secretary of State for Foreign Affairs, as represented by the British Embassy Moscow, for the provision of a project ‘Capacity Building in Russian Media.’” The letter was signed by Reuters CEO Monique Ville on July 31, 2017.

Reuters’ tender was a response to a call for bids by the FCO, which sought help in implementing “a programme of themed tours to the UK by Russian journalists and online influencers.”

The editor-in-chief of The Grayzone, Max Blumenthal is an award-winning journalist and the author of several books, including best-selling Republican Gomorrah, Goliath, The Fifty One Day War, and The Management of Savagery. He has produced print articles for an array of publications, many video reports, and several documentaries, including Killing Gaza. Blumenthal founded The Grayzone in 2015 to shine a journalistic light on America’s state of perpetual war and its dangerous domestic repercussions.