17 Apr 2022 – While claiming to defend democracy, Ukraine’s Volodymyr Zelensky has outlawed his opposition, ordered his rivals’ arrest, and presided over the disappearance and assassination of dissidents across the country. 19 Oct 2021 – For those yearning for an end to pandemic-related restrictions, credential programs certifying their vaccination against Covid-19 are the key to reopening the economy and restoring their personal freedom. But the implementation of immunity passports is also accelerating the establishment of a global digital identity infrastructure as titans of global capitalism are exploiting the crisis to institute social credit-style digital ID systems. 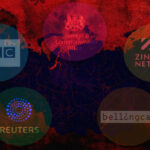 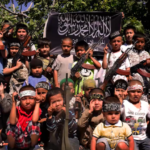 21 Dec 2019 – Claims that China has detained millions of Uyghur Muslims are based largely on two studies. A closer look at these papers reveals US government backing, absurdly shoddy methodologies, and a rapture-ready evangelical researcher named Adrian Zenz.

11 Nov 2019 – Bolivian coup leader Luis Fernando Camacho is a far-right multi-millionaire who arose from fascist movements in the Santa Cruz region, where the US has encouraged separatism. He has courted support from Colombia, Brazil, and the Venezuelan opposition. 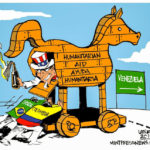 11 Mar 2019 – The US-funded CANVAS organization that trained Juan Guaido and his allies produced a 2010 memo on exploiting electricity outages and urged the opposition “to take advantage of the situation…towards their needs.”

Before the fateful day of January 22, fewer than one in five Venezuelans had heard of Juan Guaidó. Only a few months ago, the 35-year-old was an obscure character in a politically marginal far-right group closely associated with gruesome acts of street violence. He is the product of a decade-long project overseen by Washington’s elite regime change trainers. While posing as a champion of democracy, he has spent years at the forefront of a violent campaign of destabilization.

Posing as a non-political solidarity organization, the Syria Campaign leverages local partners and media contacts to push the U.S. into toppling another Middle Eastern government.

The Desert of Israeli Democracy: A Trip Through the Negev Desert Leads to the Heart of Israel’s National Nightmare
Max Blumenthal - TomDisptach, 14 Oct 2013

While the prime minister ranted against Iran in New York City and in a meeting with President Obama, his government was preparing to implement the Prawer Plan, a blueprint for the expulsion of 40,000 indigenous Bedouin citizens of Israel from their ancestral Negev Desert communities that promised to “concentrate” them in state-run, reservation-style townships.