I do not have the moral or intellectual option of telling those on the ground who risk their lives and livelihoods that their resistance is futile. Nor do I share the view that resistance is futile or that another world is not possible. History does not change through normal politics. What Myanmar and her people are undergoing is nothing less than a textbook example of Revolution. 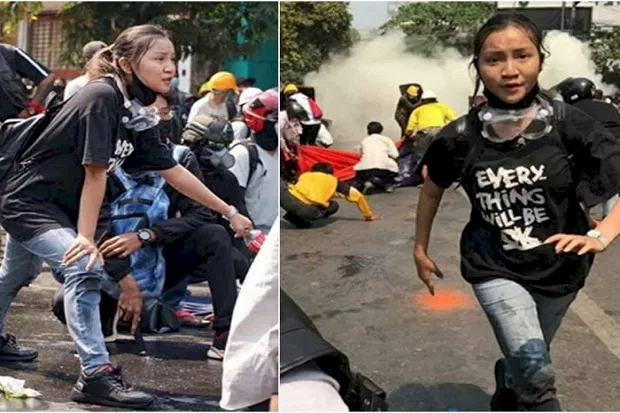 Kyal Sin,19, a beautiful demonstrator nicknamed Angel [Malaikat] was shot dead in a demo on 3 Mar 2021. She was a student, a taekwondo champion and instructor in Mandalay, the country’s second largest city. Wearing a black T-shirt with the message “everything will be OK”, she was shot in the head by a military sniper instants after these pictures. 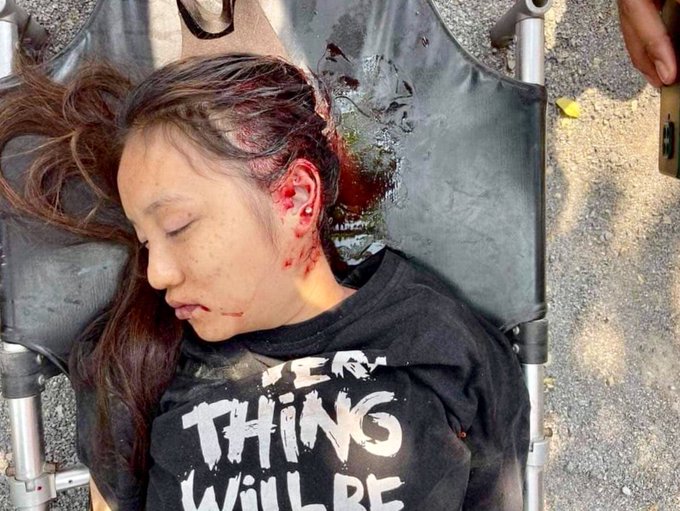 23 Mar 2021 – Growing up as a Bama nationalist in an extended military family with deep roots in the Court of Ava, my own consciousness was nurtured on inspiring tales – no doubt embellished or evolved depending on who was telling me – of my ancestors, their associates, friends and acquaintances.

These nationalist oral histories rooted in our family’s historical memories were supplemented by historical fiction, told from the revolutionary perspectives of authors with first-hand experience in various eras of resistance. My own mother, a historian and history teacher, was in charge of her high school library, and she would introduce me to this kind of reading when my Burmese reading was good enough to devour it.

I was amply exposed to the idea, not of peace or harmony, because our Burmese history has neither; not peace nor harmony. This is evidenced in the fact that the founder of the last feudal dynasty Aung Zay Ya decided to re-name a captured Mon fishing village named Dagon that saddled the Hlaing River – now the Yangon River – Yangon, which “means end of strife”, in the 1750’s. Aung Zay Ya, a village head man from the heartland Dry Zone, who raised enough men to successfully repel the Mon’s siege of the Dry Zone-based Court of Ava, proceeded to capture the lowlands of the old Burma. His successful – and bloody – military campaign against the ethnic rival Mons stopped at Yangon, hence the new name, the End of Strife. He crowned himself the king in the mould of the old Hindu-influenced Buddhist monarch, and built the last Bama or Burmese dynasty. 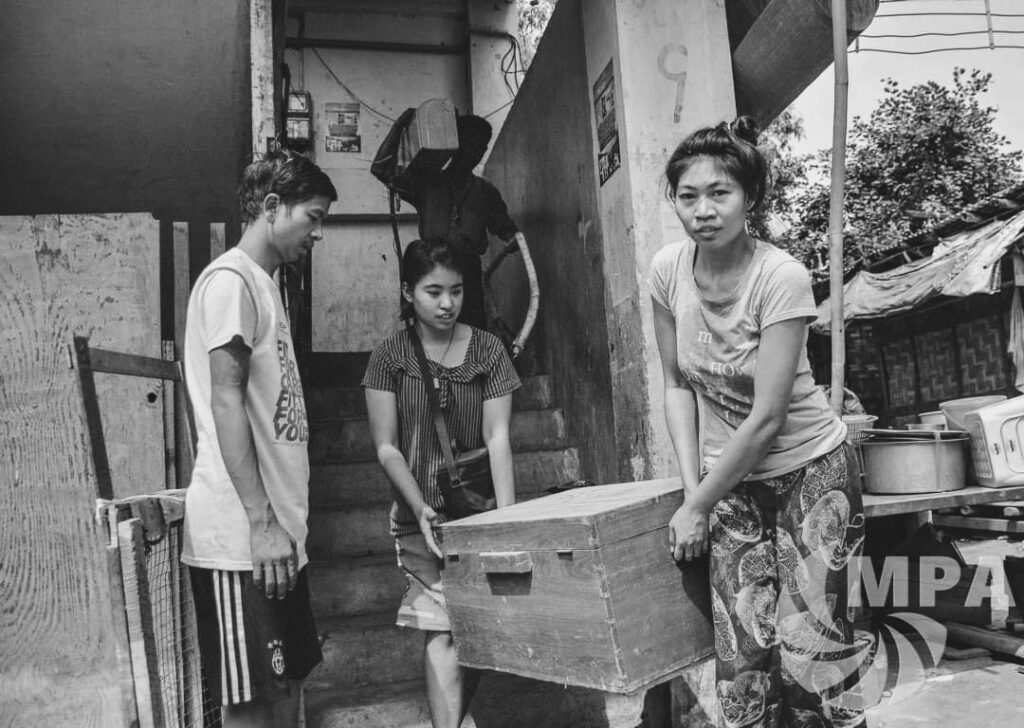 Myanmar civil servants and families seen moving out of government housing in Mandalay. Many transport sector employees and health care professionals choose unlawful evictions by the State Administrative Council or military junta rather than capitulate to the pressure, threats and intimidation to end their participation in the nation-wide Civil Disobedience Movement.

Yangon a century later, the British captured this river-front Mon-Bama settlement and turned it into its administrative and commercial capital in the annexed Burma. Less than half-century later, the Aung Zaw Ya dynasty itself suffered the final death blow to its existence when it violently encountered a far-superior colonial power, the British.

Reflecting on my own self as a Burmese, I realize my own consciousness rested on the twin-pillar of Bama nationalism – of the most militant strain at that, and a revolutionary or resistance orientation.

Over the years, through both my own formal historical studies in United States and witnessing the perils of nationalisms, I gradually detoxed from nationalism and learned to see human societies and social phenomena through the prism of the fellowship of humans.

Meanwhile, the other pillar of my individual consciousness – the revolutionary one – has not only stayed intact, but it has grown in leaps and bounds. Through my activism internationally, my appreciation for revolutions, revolutionaries and revolutionary acts has only deepened. I have met many revolutionaries from around the world – from the distant Palestine and Africa to Eelam Tamils and Timor Lest, to Thais and Malays in the immediate neighbourhoods. Needless to say, my own family circle and our extended web of friends and acquaintances have our share of coup-plotters, communist underground movements, radical trade unionists, and so on. Some died in exile. One was executed. Others gave up their careers to pursue their revolutionary aspirations. Many had revolving doors between the prison gate and their living rooms. 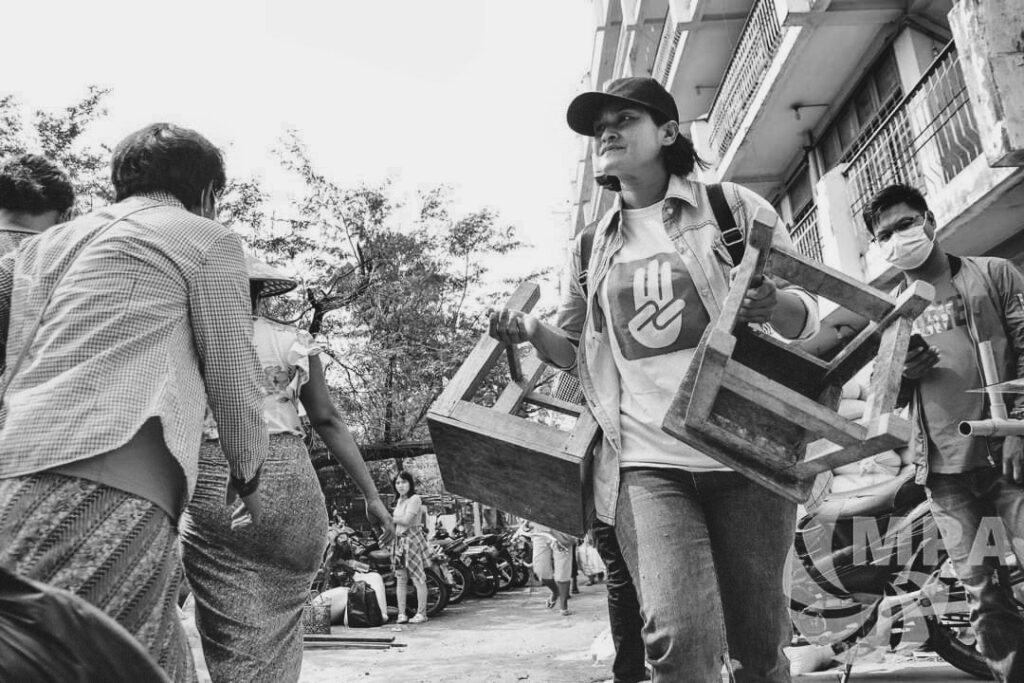 Myanmar civil servants and families seen moving out of government housing in Mandalay.

I did not set out to be a revolutionary. All I wanted as a young man was to be an educator, a teacher, who wanted to go to an English-speaking country and seek a finer education than the one I had access to in the military-ruled the Union of the Socialist Republic Burma, a glorified name for the ruined country under General Ne Win’s Revolutionary Council regime. My goal in life even in my youthful undergraduate days at Mandalay University at the start of the 1980’s was to go abroad, get a master’s degree in applied English linguistics, return home, set up a small private school, marry my girlfriend from Shan state and live happily ever after. My expression of concern for society at large, which was economically destitute and politically repressed after a quarter century of ruinous reign by incompetent delusional men on the horseback, namely General Ne Win and his sycophantic deputies, was confined to penning an essay or two on the subject of how to reform the socialist policies and governance. That was the extent of my intellectual engagement with the system that was already beyond reform. I was in my very early 20’s as a young undergraduate. Nothing consequential, much less revolutionary.

But the events of the last 36 years since my undergraduate days, having left the country for further studies in the United States, triggered something I cannot reverse: the undying desire to see and be a part of a revolution – nah, REVOLUTION, and be useful in it. In whatever capacity.

The 1988 uprisings took place, and subsequently triggered the flight of thousands of students and other anti-dictatorship activists into the several strongholds of a few Ethnic Armed Movements such as the Kachin Independence Army and the Karen National Liberation Army. I was spending my days and nights in the bookstacks of university libraries (at the University of California campuses). My usefulness – if any – was helping occasional student club bake sales to raise a few bucks which was later donated to one or two Burmese war-refugee relief organizations based in Thailand. I gave a talk on the Burmese students’ armed resistance here and there. I penned a few essays or letters to the editors of local newspapers. Occasionally I spoke in support of pro-Burmese democracy resolutions introduced by one or two sympathetic campus organizations or a city councillor.

The image of students and workers – my peers back home – taking up arm to fight a well-equipped army of a quarter million people was indeed inspirational to a mind nurtured at home, by socially and politically conscious parents and relatives, despite being thousands of miles away from the revolutionary space of Burma. I savoured the universally iconic images of Che or Castro in military outfit with a revolver hanging from his waste, or the Hollywoodized cinematographic scenes of Bolshevik storming the winter palace of the corrupt and repressive Tsarist monarchy in St Petersburg. 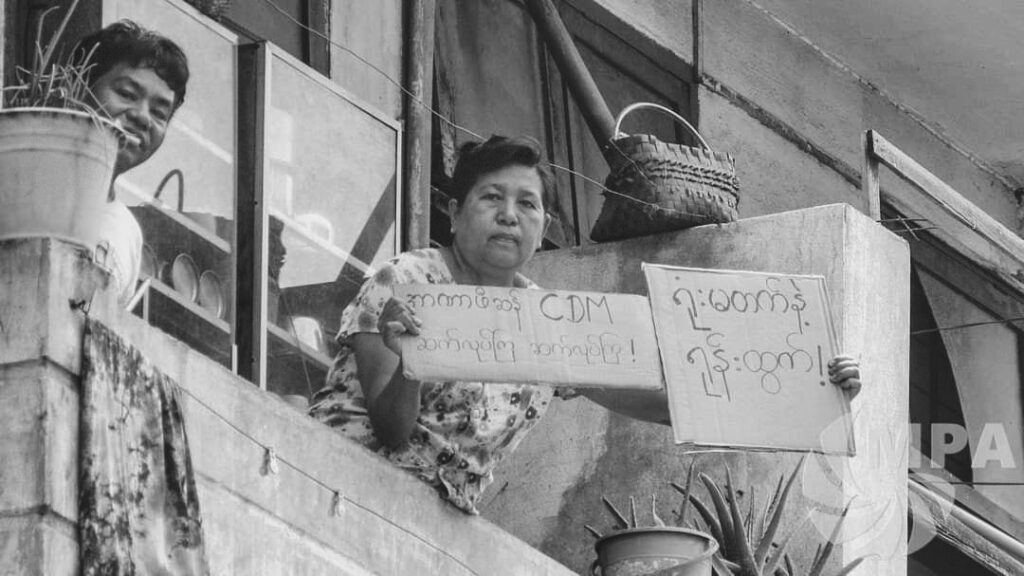 A family of civil servants holding the CDM placards. CDM has effectively denied Myanmar coup regime a functioning state, having crippled the latter’s ability to run vital sectors such as transportation, banking, accounting, civil administration and so on.

I look at what my old country – and the entire society – are undergoing. As someone who has been obsessed – yes, that’s the word – consciously or subconsciously, all my life over the last half-century, I know a revolution when I see one brewing. But my conception of Revolution has gone beyond Che with a fine Cuban cigar. I have learned there are Revolutionaries – of the textbook version – and there are revolutionaries whose names will not be recorded in the annals of revolutions.

The talks of forming the Federal Army – as the parallel and future replacement for the Tatmadaw or the Defence Services of Myanmar – or the armed resistance by angry, youthful urban youth may or may not come to fruition. But that is not the sole revolutionary act or types of revolution I have in mind.

Hundreds of thousands of Burmese civil servants who join the Civil Disobedience Movement with the avowed aim of denying the military junta – State Administration Council – a functioning state – for instance, Transportation and Accounting. Forget dictatorships and their totalitarian capacity at least to get the trains running on time – as is typically said of the Italian Fascist Duce or the leader Mussolini. SAC has been given a state that is almost completely hollowed out, thanks to the dedicated revolutionary acts of faceless civil servants. The non-functioning state is the direct outcome of the firm acts of resistance that typically are not mediagenic, and hence do not make headline news.

One of the forms is state employees – and their families – who are choosing unlawful evictions from government housing, rather than keeping the roof above their heads. No one in their right mind who has chosen such revolutionary path see New Oo Taw Hlan Yay (or Early Summer Revolution as the Burmese do not have spring as a climatic period) – as a bed of roses. They evidently have chosen this path knowing full-well the hardship and the uncertainty of their choice. I am not one to belittle their choices.

Then there are youthful protesters such as the iconic Kyal Sin and her peers – 200+ were murdered already – who actually live with the regime’s cold and calculated political repression and systemic deprivation of their civil and political rights but chose to risk their lives amidst sniper or machine gun fire with live rounds. Again, I am not the one to discourage them from taking to the streets or taking up arms. For every one of them, they make a conscious choice of possible death over a Futureless-ness in a country which now resembles a Nazi-occupied Europe or Fascist-occupied Burma of WWII.

I do not have the moral or intellectual option of telling those on the ground who risk their lives and livelihoods that their resistance is futile. For I do not share the view that resistance is futile or that another world is not possible. History does not change through normal politics. What Myanmar and her people are undergoing is nothing less than a textbook example of Revolution.