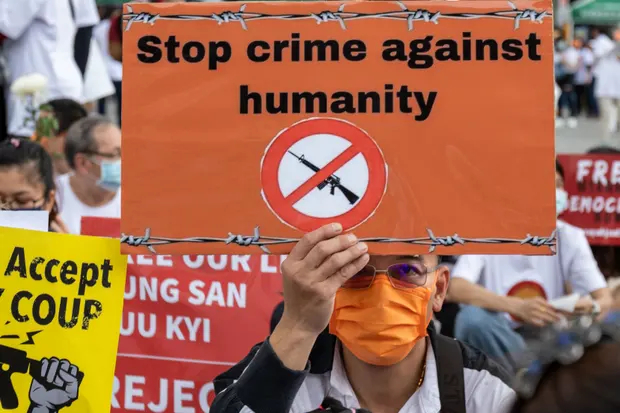 A protest against the Myanmar coup in Taipei, Taiwan.
Photograph: Jose Lopes Amaral/NurPhoto/REX/Shutterstock

29 Mar 2021 – The Myanmar military is a “terrorist group” that should be brought before the international criminal court, and funds flowing to it should be cut via a global sanctions regime, the Special Advisory Council for Myanmar says.

The council has called for a “three cuts” strategy to combat the Tatmadaw, as the military is known.

First, refer the situation in Myanmar to the international criminal court. Second, impose a comprehensive and internationally monitored arms embargo. And third, use targeted financial sanctions against senior military officials and all military-owned companies.

Australian international lawyer Chris Sidoti, a member of the advisory council and a former member of a UN independent fact-finding mission on Myanmar, said the international community must “follow the lead” of the Myanmar people who are defying the military daily on the streets of the country’s cities.

The special advisory council is an independent group of international experts on Myanmar.

“Myanmar people are calling for international action under the responsibility to protect,” Sidoti said. “In response, we want to see three cuts imposed on the Myanmar military: cut the weapons, cut the cash, cut the impunity.”

Myanmar’s military has been shooting randomly at civilians, killing children and burning people alive for protesting against its coup staged on 1 February.

More than 440 people have been killed by the military since the coup, including a 13-year-old girl who was shot dead and a snack vendor in Mandalay who troops set on fire. A one-year-old girl survived after she was hit by a rubber bullet in the eye, and video footage shows soldiers chasing people down the street on motorbikes to shoot them at point-blank range.

“These are barbaric criminal acts, calculated to provoke a state of terror in the general public with the purpose of terrorising the entire population,” an advisory council member, Marzuki Darusman, said. “The actions of the Myanmar military are the actions of a terrorist group, under any United Nations definition of the term.”

Australia has been criticised for its response to the escalating violence in Myanmar, with Canberra accused of being too slow to impose further sanctions and cut off foreign money flowing to military-controlled companies. Australia has also failed to impose sanctions against the coup leader, army chief Min Aung Hlaing.

Australia suspended military cooperation with the Tatmadaw in March following the coup but was one of the last western countries to cut ties.

The UK, US and EU countries had all severed links with Myanmar’s armed forces following the genocidal “clearance operations” against ethnic and religious minority Rohingya in 2017 which drove more than 700,000 people over the border into Bangladesh.

But Australia continued to provide non-combat training in areas such as “humanitarian assistance and disaster relief, English language transition, military law and peacekeeping” under a policy that “seeks to promote positive change through engagement with the Myanmar military”. That cooperation was suspended only this month.

Australia has said it will consider targeted sanctions beyond those already imposed, which includes an arms embargo and sanctions against some senior military figures. But these have not been imposed.

Yadanar Maung, a spokeswoman for activist group Justice for Myanmar, told the Guardian: “While the people of Myanmar are deliberately being executed in the streets by the military, Australia appears to be dragging its feet after nearly two months since the coup.”

Justice for Myanmar said Australia should immediately impose targeted sanctions against the Myanmar military and its businesses, as well as suspending police cooperation and holding the military to account for its crimes, including at the international criminal court.

“Australia failed the Rohingya when Myanmar committed genocide by continuing its military assistance to the Myanmar military and they are once against failing the people of Myanmar by not taking strong action that this grave situation calls for,” the spokeswoman said.

“Australia must learn from its past mistakes and take immediate steps now to send a clear message to the Myanmar military that such abhorrent actions are reprehensible and will not be tolerated by the international community.”

Gen Angus Campbell, chief of the Australian defence force, signed a joint statement with the chiefs of defence of the US, UK, Canada, Germany, Greece, Italy, Japan, Denmark, the Netherlands, New Zealand and South Korea condemning the junta’s indiscriminate attacks and urging it to “cease violence and work to restore respect and credibility with the people of Myanmar that it has lost through its actions”.

“As chiefs of defence, we condemn the use of lethal force against unarmed people by the Myanmar armed forces and associated security services,” the statement said.

“A professional military follows international standards for conduct and is responsible for protecting – not harming – the people it serves.”

The foreign minister, Marise Payne, said on Sunday: “Australia condemns in the strongest terms the continued and horrific use of lethal force against civilians in Myanmar, including young people and children…

“We call urgently on the Myanmar security forces to exercise restraint, uphold the rule of law and allow the Myanmar people to exercise their rights to peaceful protest.”

Ben Doherty is a reporter for Guardian Australia, and a former foreign correspondent covering south-east Asia. He has won three Walkley awards for his foreign and immigration reporting. Email: ben.doherty@theguardian.com. Click here for Ben’s public key.