The “Defender-Europe”– US Army Arrives 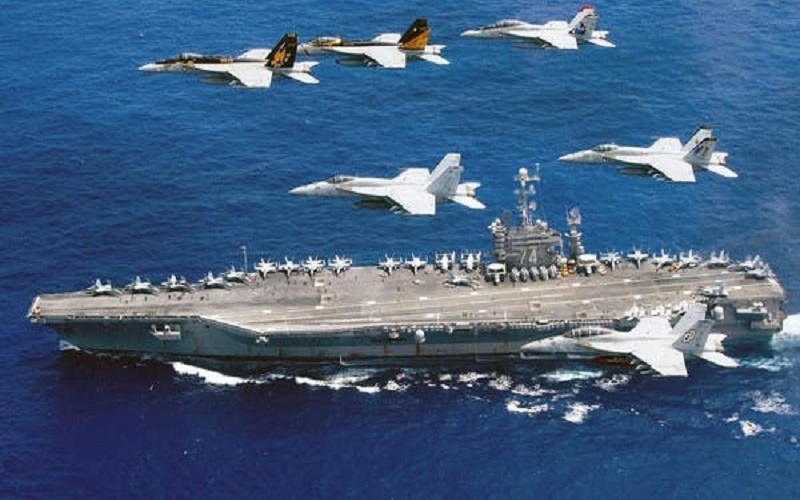 1 Apr 2021 – Not everything in Europe is paralyzed by the anti-Covid lockdown: in fact, the mammoth annual exercise of the US Army, Defender-Europe, which until June mobilized on European territory, and beyond this, dozens of thousands of soldiers with thousands of tanks and other means, has been set in motion. The Defender-Europe 21 not only resumes the 2020 program, resized due to Covid, but amplifies it.

Why does the “Europe Defender” come from the other side of the Atlantic? The 30 NATO Foreign Ministers (Luigi Di Maio for Italy), who physically gathered in Brussels on March 23-24 explained: “Russia, with its aggressive behavior undermines and destabilizes its neighbors, and tries to interfere in the Balkan region.” A scenario constructed with the reality overturning technique: for example, by accusing Russia of trying to interfere in the Balkan region, where NATO “interfered” in 1999 by dropping, with 1,100 aircraft, 23,000 bombs, and missiles on Yugoslavia.

Faced with the Allies’ cry for help, the US Army comes to “defend Europe.” Defender-Europe 21, under the US Army Europe and Africa command, mobilizes 28,000 troops from the United States and 25 NATO allies and partners: they will conduct operations in over 30 training areas in 12 countries, including fire and missile exercises. The US Air Force and Navy will also participate.

In March, the transfer of thousands of soldiers and 1,200 armored vehicles and other heavy equipment from the United States to Europe began. They are landing in 13 airports and 4 European ports, including in Italy. In April, over 1,000 heavy equipment pieces will be transferred from three pre-positioned US Army depots – in Italy (probably Camp Darby), Germany, and the Netherlands – to various training areas in Europe, they will be transported by trucks, trains, and ships. In May, four major exercises will take place in 12 countries, including Italy. In one of the war games, more than 5,000 soldiers from 11 countries will spread across Europe for fire exercises. 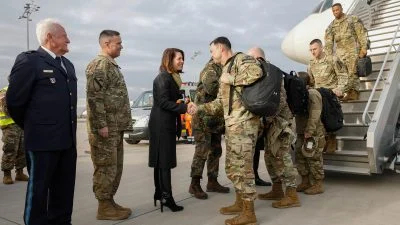 Consul General Meghan Gregonis welcomes Col. Patrick Disney in Germany. Disney and his fellow Soldiers are the first to arrive to Germany for exercise DEFENDER-Europe 20, which is the deployment of a division-size force from the USA to Europe.
(U.S. Army photo by Capt. Ellen C. Brabo)

While Italian and European citizens will still be prohibited to freely move for “security” reasons, this prohibition does not apply to the thousands of soldiers who will move from one European country to another freely. They will have the “Covid passport,” provided not by the EU but by the US Army, which guarantees that they are subjected to “strict Covid prevention and mitigation measures.”

The United States is not only coming to “defend Europe.” The large exercise – explained the US Army Europe and Africa in its statement – “demonstrates our ability to serve as a strategic security partner in the western Balkans and the Black Sea regions while sustaining our abilities in northern Europe, the Caucasus, Ukraine, and Africa” For this reason, Defender-Europe 21 “utilizes key ground and maritime routes bridging Europe, Asia, and Africa“.

The generous “Defender” does not forget Africa. In June, again within the framework of Defender-Europe 21, it will “defend” Tunisia, Morocco, and Senegal with a vast military operation from North Africa to West Africa, from the Mediterranean to the Atlantic. It will be directed by the US Army through the Southern Europe Task Force with its headquarters in Vicenza  (North Italy). The official statement explains: “African Lion exercise is designed to counter malign activity in North Africa and Southern Europe and to defend the theater from adversary military aggression”. It does not specify who the “maleficents” are, but the reference to Russia and China is evident.

The “Defender of Europe” is not passing through here. The US Army V Corps participates in Defender-Europe 21. The V Corps, after being reactivated at Fort Knox  (Kentucky), has established its advanced headquarters in Poznan (Poland), from where it will command operations along NATO’s Eastern flank. The new Security Forces assistance Brigades, US Army special units  that train and lead NATO partner countries’ forces (such as Ukraine and Georgia) in military operations participate in the exercise.

Even if it is not known how much Defender-Europe 21 will cost, we citizens of the participating countries know we will pay the cost with our public money, while our resources to face the pandemic crisis are scarce. Italian military spending rose this year to 27.5 billion euros, that is 75 million euros a day. However, Italy has the satisfaction of participating in Defender-Europe 21 not only with its own armed forces but as a host country. It will therefore have the honor of hosting the final exercise of the US Command in June, with the participation of the US Army V Corps from Fort Knox.