Chileans Voted for an End to Neoliberalism

22 May 2021 – Last week, the people of Chile voted for sweeping structural reform and an end to neoliberalism. It’s one of the Left’s biggest victories since the end of Augusto Pinochet’s dictatorship. 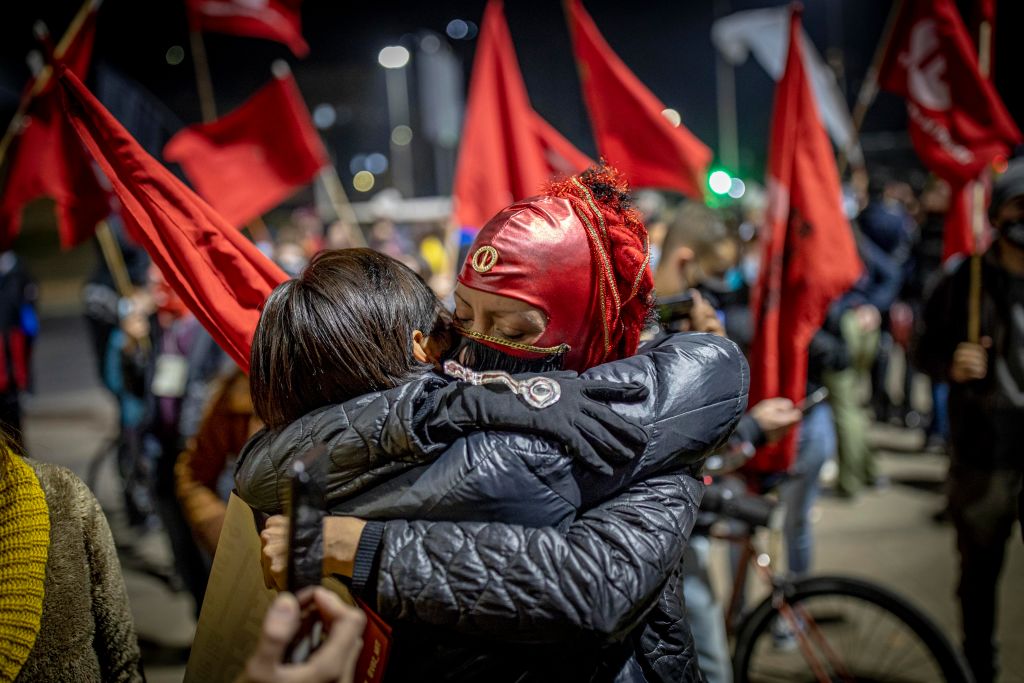 People gather in Plaza Baquedano in Santiago on May 17, 2021, to celebrate the triumph of left candidates in the Chilean elections.
(Felipe Figueroa/SOPA Images/LightRocket via Getty Images)

If just two years ago someone had said that the Left in Chile would today be celebrating one of its biggest political victories since the nation’s democratic transition away from Pinochet’s dictatorship, many would have balked. And yet, here we are.Elections on May 15 and 16 for local and regional offices and for members of the Constitutional Convention have completely changed the national political landscape in Chile. The Right, gathered around president Sebastián Piñera, was dealt a major blow, and the ruling centrist coalition, Concertación, collapsed spectacularly. The Left and social movements swept the contest, winning a series of vital political offices and, perhaps most importantly, majority representation in the assembly responsible for drafting Chile’s new constitution.The two-day mega election — deciding mayorships, municipal councils, regional governorships, and the composition of the Convention — is a milestone, the impact of which will resonate for decades to come. By winning substantial representation, the Left made good on the promise of radical change announced by the popular revolt that broke out on October 18, 2019. Just as importantly, a clear signal was sent that Chile’s reigning transitional regime — brokered at the end of the dictatorship between the center-left, the Right, and the military — is on life support.Left-wing parties Frente Amplio and the Chilean Communist Party made major inroads into local and regional governments, and won numerous seats at the Constitutional Convention. The non-party left — feminist and environmental movements, in particular, as well as representatives from First Nations and Indigenous peoples — also won important political offices, and will be sending a number of representatives to the Convention. On balance, almost overnight, a left-wing groundswell has achieved major footing in institutional politics, an arena from which it had been almost entirely excluded for decades.Meanwhile, the traditional Chilean political elite, still reeling, has put forward its own narrative of its election defeat: it was a “message” to the political class that it had fallen out of touch with the people.

But last week’s election did not simply produce a protest vote. Rather, the people of Chile went to the polls to cast their votes for a clear-eyed program of guaranteed social rights and an end to neoliberalism.

Toward a New Constitution

Chile’s path to a new constitution has not been simple. On November 15, 2019, in an attempt to placate the popular revolt of October, the entire Chilean political establishment — except the Communist Party — signed the Agreement for Social Peace and the New Constitution. Aiming at pacifying the protests, the agreement provided a temporary lifeline for the embattled Piñera administration, but it simultaneously kicked off the historic process of redrafting Chile’s constitution, inherited from the Pinochet era.

The Constitutional Convention, approved by an overwhelming 78 percent in 2020’s national plebiscite, is an elected assembly responsible for drafting the new constitution. It will be formed by 155 members — 77 women and 78 men — who will be in charge of writing Chile’s new Magna Carta. The body will decide on such fundamental issues as social rights, the role of the state, and the country’s private-property regime.

The constitutional reform voted by the legislature establishes that any law proposed at the Convention must achieve two-thirds majority support. That a one-third minority is capable of blocking any proposal has been a comfort to the Right, insofar as its veto power would at least act as a shield of defense against more radical proposals. However, with the Right having now failed to win the necessary 33 percent representation, it no longer has the power to even block proposals.

We can expect that the weeks leading up to the Convention’s first session will be busy with alliance formations. The general understanding is that the center-left and Left together form an overwhelming majority opposition to the right-wing government, but it remains to be seen how voting blocs will form. One possible scenario is that alliances will divide into three groups: the Right and center-right (including Piñera’s Chile Vamos and the right-wing of the Concertación), the center-left (which includes the Socialist Party and other reformist parties) and the Left (comprised of the Communist Party, Frente Amplio, and the independent left and Indigenous representatives). In that scenario, the Left bloc would have a simple majority (50.3%) — requiring dialogue with the moderate Left to overcome the two-thirds threshold.

Where the Left is concerned, their voting bloc may not form a monolithic majority — some social movements and Indigenous groups are still wary of the political process. But a broad anti-neoliberal left has a historic opportunity to exert its influence over the Convention and set the terms of debate for a political cycle that is just beginning.

In one of the most striking turns, the independent left and social movements picked up many seats at the Convention. The Plurinational Feminist Constituent Platform, uniting feminist candidates under the banner “if one enters, we all enter,” made good on its slogan by picking up five seats. The so-called People’s List, channeling the insurrectionary spirit of the October revolt, won twenty-six seats, surpassing many parties of the ex-Concertación. Of the seventeen seats reserved for Native peoples, seven went to Mapuche leaders.

Amid the enthusiasm, Chile’s recent elections also pose a number of open questions. Perhaps the most pressing matter is to understand why there was such low voter turnout (around 43.4 percent), forming a sharp contrast with the massive participation in the Constitutional Plebiscite of October 25, 2020.

In addition, in one of the main electoral districts in the country, four feminist candidates were left out of the Convention due to an electoral method, the so-called D’Hondt, that privileges party lists over individual votes. In addition to that, mandated gender-parity laws contradictorily resulted in some women candidates being excluded in favor of their male counterparts. As Alondra Carrillo, elected to the Convention as a representative of the Coordinadora Feminista 8M, told Jacobin, parity laws often operate “as a ceiling and a form of exclusion, to reassert the presence of men at a time when women become the majority.”

Other social forces expected to win a seat at the Convention were left out. The United Workers’ Central failed to win representation, and the Coordinadora Nacional NO+AFP (which for years has been fighting for a new social-security system) only elected one spokesperson, despite running many candidates.

Nor was the election a resounding victory for all social movements. Newer movements — feminist and LGBT groups, plurinational sectors, ecologists, and students — performed quite well, but organized labor underperformed.

With just weeks until its first session, the first great battle of the Convention will revolve around procedural rules. Here, the main tension is between conservative sectors calling for the terms of the November 15 agreement to be fully respected, and those on the Left that will challenge those terms on the grounds that they are antidemocratic. Specifically, the Left will want to challenge formal limitations such as the two-thirds majority clause and the lack of popular influence over the proceedings, as well as bring more substantial socioeconomic issues, like international trade agreements, into the debate.

The majoritarian anti-neoliberal sector has the potential to dictate the terms of the Convention, but to do so they must not back down in the face of an inevitable backlash from the combined forces of the Right and the Concertación.

A Historic Opportunity to Write the Future

The other key area to watch in weeks to come is the alliance formed between the two largest left-wing parties: the Communist Party and the Frente Amplio. Both parties scored historic victories by picking up mayorships and governorships in the most recent elections, and together they form the largest left bloc at the Convention.

Since its foundation in 2017, Frente Amplio has spurred an important revival of progressive, youth-led politics in Chile. However, it has increasingly acquiesced to the reigning model of transition-era politics, placing a higher priority on governability and negotiations when, some would argue, a more radical approach is needed. (Frente Amplio, for example, signed Piñera’s Agreement for Social Peace.)

The more seasoned Communist Party has shown itself adept at collaborating with the center-left around key areas while still hewing closer to a strong anti-neoliberal stance when called for. Key to the formation of a broad anti-neoliberal majority at the Convention, the two parties must overcome sectarian tendencies and recognize that the Chilean left is much broader than party ranks.

The challenges facing the Chilean left are many, but so are its opportunities. Never has the Left been so close to converging around a common feminist and anti-capitalist program — a far cry from the typical demands for greater social rights or immediate improvements in living conditions. The Left has successfully turned the Constitutional Convention into a conduit for the revolts of October 2019; now it must strike a balance between maneuvering within the halls of power and maintaining a clear vision of a future society that will serve the interests of the working class.

In short, the Chilean left has shown the power of revolt and must now face its greatest test: whether it can take the reins of power and turn the contestation of the Pinochet-inherited economic system into a majoritarian movement for a completely different society. Maintaining the active participation of the independent left and social movements — plurinational feminism, in particular — will be fundamental to the success of organized progressive parties. Chile’s (and Latin America’s) Feminist General Strike has been one of the most significant political events in recent decades; were it to be sidelined by other progressive forces, it would blunt the vanguard of the most openly anti-capitalist current of the progressive bloc.

Finally, for the Left to seize its historic opportunity, it will need to do more than simply exert pressure from within the Constitutional Convention. Various sectors of the Left and social movements have called for popular mobilizations in the street so as to “besiege” the Convention and ensure that the process does not bypass the will of the people. In the days and weeks to come, the streets of Chile must be an expression of the same popular will that set the constitutional process in motion.

The Convention must be opened to popular participation, allowing space for proposals and deliberation from rank-and-file sectors. Even for those political demands that exceed the scope of the Convention, today is still the moment to press for an end to state-sponsored terrorism, especially in Mapuche territories, and to strengthen the working-class institutions of Chile that have played such an important role in challenging neoliberal authoritarianism.

Chile has taken a decisive step toward ending the neoliberal and antidemocratic constitution of 1980. Its next steps must be toward a sweeping structural transformation of society led by the people and the working class. What happens over the next two years as the Constitutional Convention advances will determine the political contours of the future for years and decades to come.

Pablo Abufom is a translator and master in philosophy from the Universidad de Chile. He is an editor of Posiciones, Revista de Debate Estratégico; a founding member of the Centro Social y Librería Proyección; and part of the editorial collective of Jacobin América Latina.