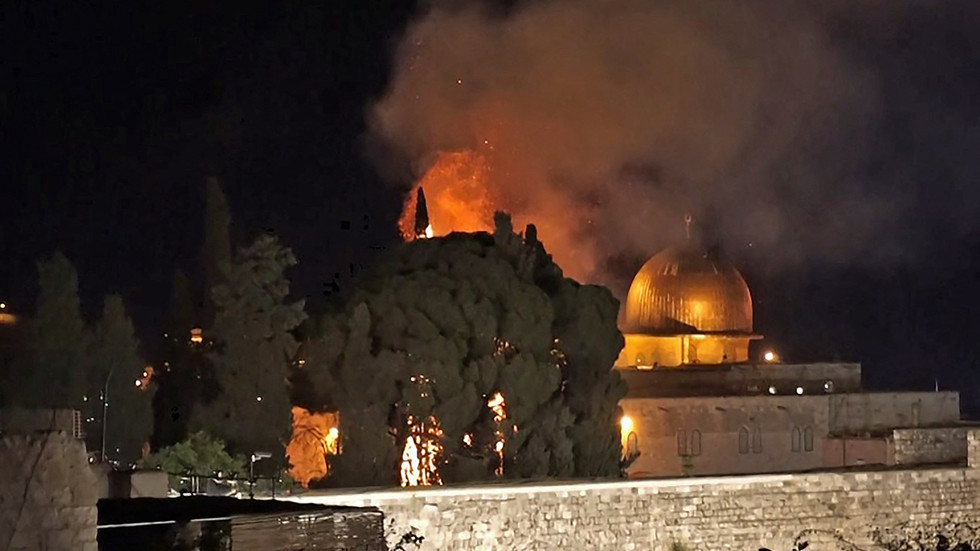 Fire near the Dome of the Rock mosque in Jerusalem’s Al-Aqsa mosque complex on May 10, 2021. © AFP / Claire GOUNON / AFPTV

21 May 2021 – Beijing’s more conciliatory approach to the mire that is Israel-Palestine relations may be based in self-interest, but unequivocal American support for Israel hasn’t brought peace, so why not try something new?

Israel and Hamas have agreed a ceasefire, bringing an end to just over a week of sporadic violence which has seen hundreds of civilians in Gaza killed. The United States was quick to celebrate the news, with Joe Biden making an announcement which appeared to take credit for the outcome. He again offered full American support to Israel, avoided any condemnation and vowed immediately to sell weapons to Tel Aviv in order to replenish the Iron Dome defence system. It did not strike the tone of a peacemaker, although he stated he sought equality for Israelis and Palestinians alike, there was very little to actually suggest this.

Meanwhile, China responded to the news of the ceasefire by immediately announcing the supply of emergency humanitarian aid to Gaza, a striking contrast from the US military centric approach. This begs the question; who has shown true leadership in this situation? Whilst China is of course not a frontline player in the Arab-Israeli dispute, it has a position that some might describe as more responsible and pragmatic than the United States. Beijing of course is not anti-Israel, but nonetheless recognizes the Palestinian state and believes in a two-state solution to the conflict. As the exchanges took place, China sponsored several UN security council resolutions calling for a ceasefire, backed by the rest of the council but ultimately blocked by the US, who has long vetoed all Israel-related content at the forum. Today, China also said it was willing to hold negotiations between both parties.

While China’s position on the matter has not changed, Beijing has been especially pro-active on the Israel-Gaza issue. This may be a product of its increasingly tense relationship with the United States. Beijing has essentially been locked in a public-relations war with Washington for some time. So, while America has sought to tarnish China’s international image with issues such as the Uighur situation in Xinjiang, China was quick to highlight the perceived double standards of America in its unequivocal support for Israel on the situation in Gaza. In this case, China’s more pressing role on the conflict may have been motivated both by a desire to set an example against the United States and build greater affinity with Muslims.

In this case, beyond the specific dispute with the US, is China’s approach to the region better placed to achieve results and peace than Washington? In contrast to America’s brazen and unconditional backing of Israel, Beijing has long floated a “best of all worlds” approach to diplomacy in the Middle East. That is a diplomacy which facilitates and balances everyone, including long-standing adversaries such as Israel and Iran. This is premised on China’s foreign-policy tradition of non-interference and mutual respect for sovereignty. This makes Beijing’s approach more benevolent than Washington’s, which has a long-seated history of war, regime change and chaos, but is it on the other hand more effective? Such an approach is inevitably stand-off in nature and may mean China “lacks teeth” in striving not to upset any particular player.

For example, despite being harsher on Israel than the US, Beijing was nonetheless fearful of overtly upsetting Tel Aviv throughout this conflict. As an advanced innovative economy, Israel remains a very important financial and technology market for China. Several days ago, CGTN posted a video presentation on America’s support for Israel which was strongly criticized by their embassy in China as anti-Semitic. CGTN withdrew the video, illustrating Beijing’s unwillingness to take serious risks in its relationship with Israel to intervene in the situation or change the status quo. As the balancing act takes priority, and as China does not of course have the same military and power stake in the region as America, it may be more conciliatory, balanced and tolerable, but it is more rhetorical than material in nature.

Also: Taking a much tougher line on Israel is the ONLY way America will ever be able to escape the Middle East

Yet, one cannot say China’s growing role in the region is unwelcome, or that a Middle East that is dominated completely by the US is in any way favourable. Biden claims success here but what exactly has he done? A reset of the same status quo that has never failed to break out into frequent violence is not progress, it’s just arrested development. The White House otherwise retains all the disruptive challenges to the US-Israel relationship imposed by Trump, which exacerbated this situation in the first place, meaning it’s only a matter of time, be it in the next five or 10 years at most, that this scenario inevitably repeats itself and will do so until there is real change. In this case, China’s calls and push for peace in the Middle East is a welcome development, even if it is only coming from grievances instilled by Washington. More players and more accountability in the region are a welcome remedy, but one shouldn’t expect Beijing to get its hands too dirty yet.