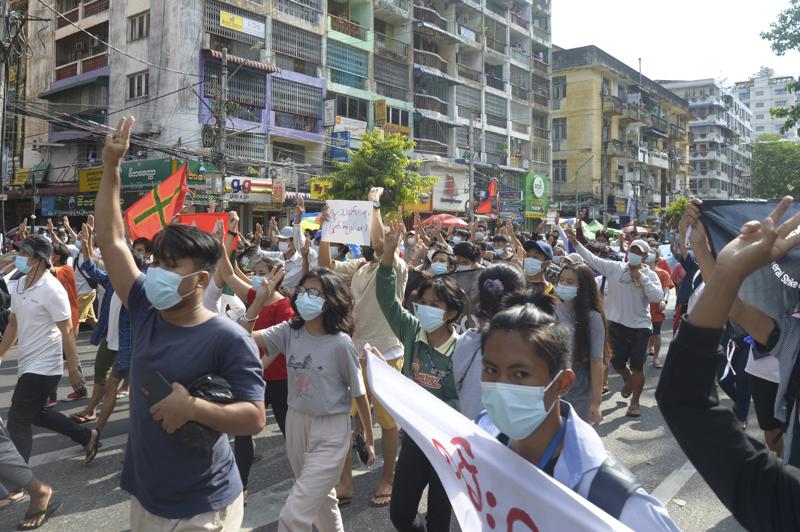 Anti-coup protesters flash the three-finger salute of defiance during a demonstration on Thursday, May 6, 2021, in Yangon, Myanmar. More than 200 global organizations urged the U.N. Security Council on Wednesday, May 5, 2021, to impose an arms embargo on Myanmar, saying the time for statements has passed and immediate action is needed to help protect peaceful protesters against military rule and other opponents of the junta. (AP Photo)

6 May 2021 – A flash mob of mostly young people in Myanmar’s biggest city staged a brief protest march today against military rule, the latest in a series of actions aimed at reducing the chances of a deadly response by the authorities.

In the five-minute protest in Yangon, about 70 marchers chanted slogans in support of the civil disobedience movement that opposes February’s army coup that ousted the elected government of Aung San Suu Kyi. They then scattered into the downtown crowds.

Protests also took place in other cities and towns including Mandalay, the country’s second biggest city, where Buddhist monks marched, and Dawei in the southeast, where the demonstrators included engineers, teachers, university students and members of LGBT groups.

Demonstrators in Dawei tore up and set fire to textbooks as they called for a boycott of schools, which are due to re-open soon after a long shutdown due to the coronavirus pandemic.

In the past week, towns and cities across the country have seen similar protests, some involving primary school students. Campaigners say the education system is poor and should be scrapped. They also want to stop schools from opening to prevent the junta from claiming that normalcy is returning after months of turmoil.

In Yangon in particular, small protests publicized by word of mouth have become popular. They contrast with weeks of confrontations in which security forces increasingly used lethal force, with some militant protesters responding with homemade weapons such as gasoline bombs in self-defense.

In other areas, mass peaceful protests still are being broken up by force, while in some remote areas, groups opposed to the ruling junta have occasionally ambushed security forces, leading to bloody clashes.

According to the Assistance Association for Political Prisoners, which compiles details of arrests and fatalities linked to the junta’s crackdown, 769 protesters and bystanders have been killed since February’s military takeover. The junta has said the death toll is about one-third of that, and that the use of lethal force was justified to end what it called rioting.

After the military government began using lethal force to suppress demonstrations, protesters in some towns and neighborhoods began organizing themselves into home-grown militias or defense groups.

On Wednesday, the anti-military shadow government formed by elected lawmakers who were barred from taking office by the military announced a plan to unify these local groups into a national “People’s Defense Force” which would serve as a precursor to a “Federal Union Army” of democratic forces including ethnic minorities.

The plan was announced by Khin Ma Ma Myo, deputy defense minister of the shadow National Unity Government, which challenges the junta’s legitimacy. She said one of the duties of the People’s Defense Force is to protect the country’s resistance movement from military attacks and violence instigated by the junta.

The National Unity Government has the backing of several major ethnic minority groups who for decades have been seeking greater autonomy and who maintain their own guerrilla forces. The two most important are the Kachin in the north and the Karen in the east, both of which are actively engaged in combat with the government’s military forces.

Pado Man Man, a spokesman for the 5th Brigade of the Karen National Union, said he believes that the formation of the People’s Defense Army will be a step toward a future state that includes all ethnic armed groups.

“The emergence of the People’s Defense Army is even a little bit late. We have the same direction and purpose. We are now cooperating,” he said.

Since the military’s seizure of power and crackdown on opponents, students and factory workers have fled to territory controlled by the ethnic guerrilla forces to take military training.