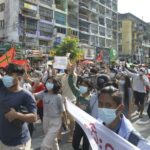 6 May 2021 – A flash mob of mostly young people in Myanmar’s biggest city staged a brief protest march today against military rule, the latest in a series of actions aimed at reducing the chances of a deadly response by the authorities. In the five-minute protest in Yangon, about 70 marchers chanted slogans in support of the civil disobedience movement that opposes February’s army coup that ousted the elected government of Aung San Suu Kyi. They then scattered into the downtown crowds.