The bombing of global media offices in Gaza caused a stir, while few noted the Palestinian journalists left to work with targets on their backs. 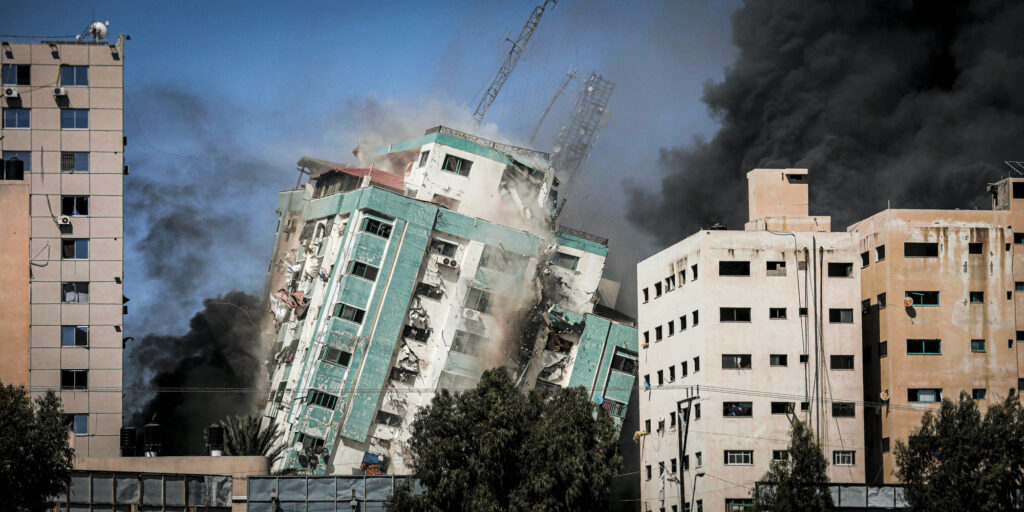 The Al-Jalaa Tower — which housed the Associated Press, Al-Jazeera, and other media outlets — is seen collapsing after being targeted by Israeli airstrikes in the Gaza Strip on May 15, 2021.
Photo: Momen Faiz/NurPhoto via AP

18 May 2021 –In 2008, Momen Faiz Quraiqea was a budding 21-year-old video journalist when an Israeli airstrike blew off his legs. The experience as a victim of what many considered a war crime only hardened his resolve to document the civilian costs of armed conflict.

“When the Israelis attacked me, I felt it is my life’s role to spread the truth about the crimes against other civilians and journalists in Gaza,” Quraiqea said. “Israel seeks to obliterate the Palestinian message, but each injury only makes us ready to expose their crimes. Our narration will never stop.”

Despite requiring a wheelchair, Quraiqea spent the next decade establishing himself as an internationally recognized photojournalist. His images from the occupied Gaza Strip — a densely populated strip besieged by Israel’s powerful military — have appeared across international publications and in exhibitions abroad. He formed a small company called Idea Media and got an office space.

In spite of the challenges and threats he endured reporting in Gaza, Quraiqea says he had “built his dream” — until last week, when an Israeli airstrike blew up his life once again.

“My colleagues called, said the IDF” — Israel Defense Forces — “just warned they were going to bomb the building, so I rushed to the office,” Quraiqea told The Intercept. “But I didn’t make it in time. It was bombed before I arrived. Totally destroyed.”

“My colleagues called, said the IDF just warned they were going to bomb the building, so I rushed to the office. But I didn’t make it in time.”

“I just stood in front of the rubble of my company,” said Quraiqea. “I saw my dreams, the long days of working, our archive and equipment, all in rubble. It is all gone now.”

Quraiqea’s agency is just one of more than 20 Gazan media outlets razed by Israeli airstrikes in the past week. Much attention has been focused on the airstrikes that destroyed international media organizations’ Gaza offices, but local journalists bear enormous burdens of not only their work for the foreign press, but also to tell the stories of their neighbors and kin. Unlike international colleagues, Gazan journalists cannot leave, for lack of Israeli permission, and, without the protection afforded by global media, take on added risks just by dint of being Palestinians.

Despite their unique risks — and the costs they pay — Gazan journalists continue to do their work, to tell the story of their people. The more they do so, the more the international press relies on them, the larger the targets on their backs become. And yet the attacks that have destroyed so many of their offices and equipment garner less attention than the very international organizations that rely on them taking these extraordinary risks. 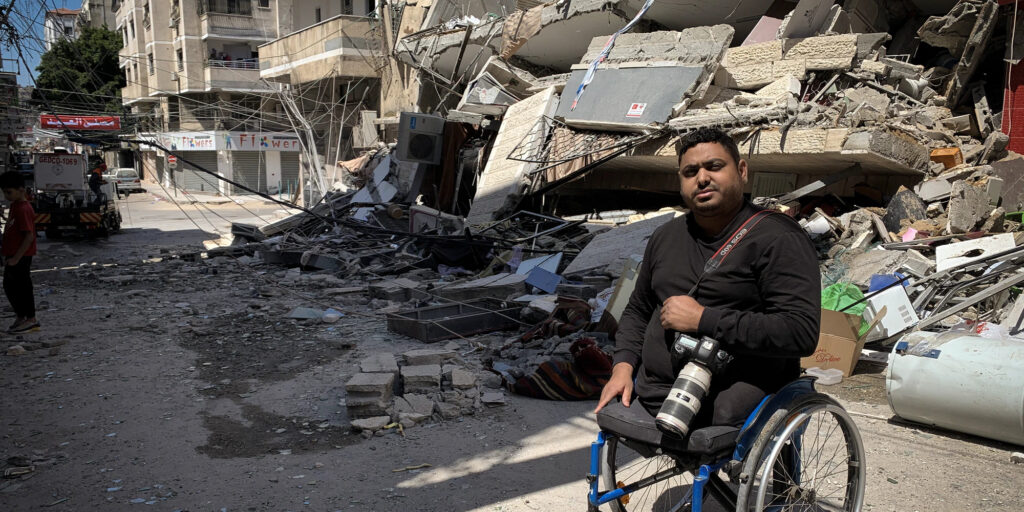 Gazan photojournalist Momen Faiz Quraiqea sits in front of the remains of his media agency‘s office that was destroyed by an Israeli airstrike in Gaza City on May 14, 2021.
Photo: Courtesy of Mohammed Quraiqea/Idea Media

“Every outlet that has been leveled to the ground is a loss for journalism and veracity,” Ignacio Miguel Delgado, the Middle East and North Africa representative for the Committee to Protect Journalists, told The Intercept. “The relentless bombings of media outlets in the Gaza Strip, along with the ban on the entry of foreign journalists to Gaza, is depriving not only the world of a much-needed coverage, but it also raises the suspicion that Israel is deliberately trying to prevent coverage of the ongoing military operations in Gaza.”

Israel announced on Tuesday evening that it would be reopening the Erez Crossing to Gaza on Wednesday for international journalists.

This week, human rights groups accused Israel of disrupting international coverage of the war on Gaza and referred Israel to the International Criminal Court, following Saturday’s Israeli airstrikes on a 12-story tower housing international media, including Al Jazeera and the Associated Press.

“Deliberately targeting media outlets constitutes a war crime,” Reporters Without Borders said in a Sunday statement. “By intentionally destroying media outlets, the IDF are not only inflicting unacceptable material damage on news operations. They are also, more broadly, obstructing media coverage of a conflict that directly affects the civilian population.”

Since Israel launched its latest campaign in Gaza, the Israeli military has prevented foreign press and human rights groups from accessing the Gaza Strip from Israel, despite the mounting numbers of civilian casualties and the magnitude of destruction.

“When Israel restricts or threatens the press, it dehumanizes Palestinians,” Amnesty International’s Sherine Tadros said. “The story of a ‘4-year-old named Ahmed who loved Pokemon and playing with his older sister’ is much more powerful than a single line in a script ‘One Dead Child in Gaza’ or the death toll that is so often reported. Israel’s doing this intentionally, lest we forget where the international press is reporting from in lieu of access to Gaza: the Israeli border towns.”

“When Israel restricts or threatens the press, it dehumanizes Palestinians.”

A week ago, following Israel’s first round of airstrikes on Gaza, the Israeli Government Press Office announced that there would be “no passage for journalists through Erez Crossing until further notice.” The next day, the Press Office hosted a guided tour of Israeli towns near Gaza for foreign reporters — in coordination with the IDF.

Erez is the only crossing of the Israel-Gaza barrier open to journalists and its weeklong suspension prevented international news media access to a major Israeli military operation in Gaza for the first time since the 2008-2009 Gaza War.

On the Gazan side, both the Government Press Office and Ministry of Interior of Gaza, which are controlled by the Hamas political party and militant group, confirmed to The Intercept that Israel alone was preventing access through the Erez Crossing. “Unlike the Israelis,” a spokesperson said, Hamas welcomes foreign press and human rights groups to monitor the escalating crisis.

All the reporting currently coming out of the territory is being done by Gazan journalists, many of whom describe a week of sleepless nights under Israeli bombardment and emotionally exhausting days of documenting civilian carnage. Last Thursday, Gazan journalists Mohammed Alaloul and Mustafa Hassona were hit by an Israeli airstrike while driving in a vehicle clearly marked “TV,” leaving Alaloul seriously injured.

“Nowhere in the Gaza Strip are journalists safe. Gazan journalists are taking life-threatening risks to report the news.”

“When international access to a war zone is restricted, we rely on journalists inside reporting on the ground,” said Tadros, of Amnesty International. “In the grand scheme of accountability, they become the primary people that human rights investigators rely on for evidence, so the targeting of them is completely unacceptable — these are witness to potential war crimes for the international community.”

At the time of publication, 12 Israelis have been killed by rockets fired by Gazan militants, including two children. In Gaza, Israeli airstrikes have killed at least 215 people, 61 of whom are children. More than 1,400 Gazans have been wounded and upward of 50,000 are currently displaced by Israeli airstrikes that have damaged or razed nearly 450 buildings.

“For the Gazan journalists reporting inside now, it’s an incredible and unfair burden to shoulder,” Tadros said. “But if they can document what’s going on as precisely as possible, all of these facts matter.” Tadros added, “I hope they matter, and the only thing we can hold onto is, at the very least, that no one can claim that this didn’t happen.”

Like all Gazan reporters, Quraiqea’s life beyond journalism is a uniquely Palestinian story.

Israel killed his father and demolished his home in 1987. In the 2014 war, his home was destroyed again and, in 2018, he was injured again while reporting on the popular demonstrations at the Israel-Gaza barrier, known as the Great March of Return.

“I suffered a lot from the Occupation. We witnessed three wars, and this is the fourth. We have lost some of our friends, and lots of colleagues have been injured,” Quraiqea said. “We really need a real change. We want an international and legal guarantee that prevents the Occupation from attacking us and targeting us, as civilians and journalists.”

Within hours of Idea Media’s destruction, Quraiqea had “resumed his work of documenting the Occupation’s crimes.”

“We will rebuild what the army destroyed,” he told The Intercept, referring to the Israelis. “And we will keep documenting the Israeli crimes against the Palestinians.”