Israeli Man Trying to Take Over Palestinian Home Says ‘If I Don’t Steal It, Someone Else’ Will

The house is located in an occupied East Jerusalem neighborhood where Palestinian residents have been ordered to vacate by an Israeli court. 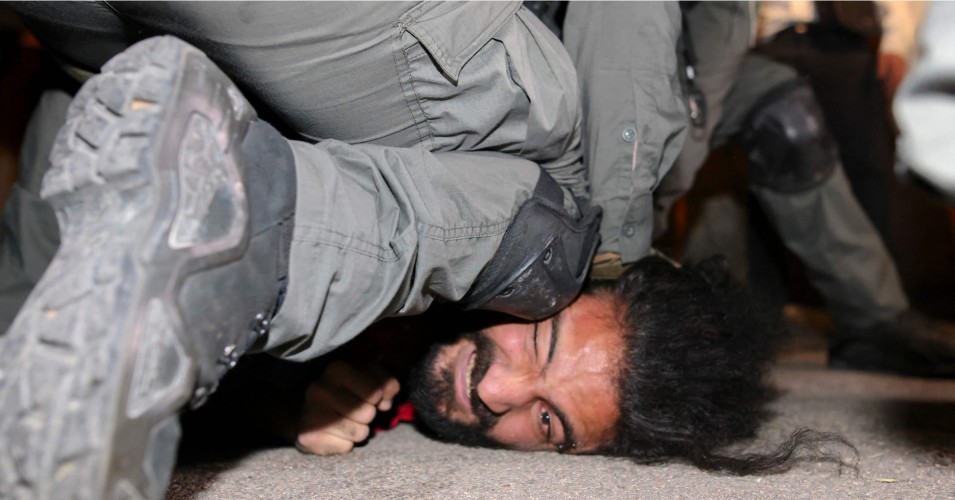 A member of Israel’s security forces kneels on the head of a Palestinian man amid ongoing confrontations as Palestinian families face eviction in the Sheikh Jarrah neighborhood of East Jerusalem on May 4, 2021.
(Photo: Ahmad Gharabli/AFP via Getty Images)

4 May 2021 – In what Palestinian observers and advocates call a glaring example of settler colonialism in action, a video circulating on social media this week shows a Palestinian woman confronting an Israeli man who admits he is trying to steal her family’s home in occupied East Jerusalem.

“They are just sitting in our home, tormenting us, harassing us, doing everything they can… as part of an effort to completely annihilate the presence of Palestinians from Jerusalem.”
—Mohammed al-Kurd, East Jerusalem

According to Al Jazeera, Palestinian activist Tamer Maqalda recorded the footage of the exchange between Mona al-Kurd and a man with a North American accent named Jacob, whom al-Kurd knows because his family has already stolen half of her home.

“Jacob, you know that this is not your house,” al-Kurd tells the man in her backyard, who replies: “What’s the problem? Why are you yelling at me?”

Al-Kurd then pleads, “You are stealing my house!”

Jacob replies: “And if I don’t steal it, someone else is going to steal it.”

Al-Kurd then protests that “no one is allowed to steal it.”

In what other words, if not Apartheid, are we to describe the reality in Palestine?

Israeli settlers like this man are so comfortable in their theft of Palestinian land & homes because they have been supported & encouraged to do so by the state since it was established in 1948 https://t.co/yDYZ48pETr

According to Al Jazeera, half of the al-Kurd family home was seized by Israeli settlers in 2009. Mona’s twin brother Mohammed previously told the outlet that the family has been sharing the property with “squatters with Brooklyn accents” in a situation he described as “insufferable, intolerable, [and] terrible.”

“They are just sitting in our home, tormenting us, harassing us, doing everything they can to not only force us to leave the second half of our home but also harassing our neighbors into leaving their homes as part of an effort to completely annihilate the presence of Palestinians from Jerusalem,” Mohammed said.

Al-Kurd’s home is located in the Sheikh Jarrah neighborhood of East Jerusalem, which has been illegally occupied by Israeli forces since 1967, and where Israeli settlers have been seizing Palestinian homes with state support. Last March, an Israeli court in the occupied city ordered half a dozen families including the Al-Kurds to leave their homes so that Jewish settler colonists could take possession of them.

I’ve been seeing some inaccuracies in the media. Here is our official statement about what happened in the occupation court today. #SaveSheikhJarrah pic.twitter.com/Dgm41rysZ5

Dozens of other Palestinian families in the neighborhood live under the constant threat of eviction.

“The inherently unjust system of Israel’s colonial courts is not considering questioning the illegal settlers’ ownership and has already decided on the families’ dispossession,” a statement from the affected Palestinian families said, according to Al Jazeera.

The video’s publication follows an April 27 report from the U.S.-based group Human Rights Watch that accuses Israel of “crimes against humanity” including apartheid and persecution. It also follows the publication of videos showing rampaging mobs of far-right Israelis attacking Palestinian people and property in East Jerusalem.

These are the kinds of acts of blood-curdling violence that Israelis are committing en masse in Jerusalem tonight.

Keep your eyes on and your hearts with the Palestinians there. pic.twitter.com/1GKBXeoOcx

The modern state of Israel was founded largely through the theft of Palestinian land and the ethnic cleansing of more than 700,000 Arabs from their homes in 1948 and 1949. Over 400 Arab villages were destroyed or abandoned, their residents—some of whom still hold the keys to their stolen homes—were never allowed to return, despite a United Nations resolution guaranteeing the right of return.

Israeli war hero and Cabinet minister Moshe Dayan acknowledged in a 1969 speech that:

We came to this country, which was already populated by Arabs, and we are establishing… a Jewish state here. Jewish villages were built in place of Arab villages. You do not even know the names of these Arab villages, and I do not blame you, because those geography books no longer exist. Not only do the books not exist, the Arab villages are not there either… There is not one place built in this country that did not have a former Arab population.

Hundreds of thousands more Palestinians were ethnically cleansed from their homes during Israel’s seizure of the West Bank, Gaza, and East Jerusalem in the 1967 Six Day War.