24 May 2021 – A fragile ceasefire between Israel and Palestinian groups Hamas and Islamic Jihad held for a third day on Sunday despite inflammatory threats by the Israeli government and police-backed fascistic attacks by Israeli settlers on Palestinians on the occupied West Bank.

The Israeli provocations intensified as more residents in Gaza emerged from their homes on the weekend to survey the massive damage caused by the 11-day Israeli bombardment. The full extent of the destruction became clearer, even as Israeli drones buzzed incessantly overhead. 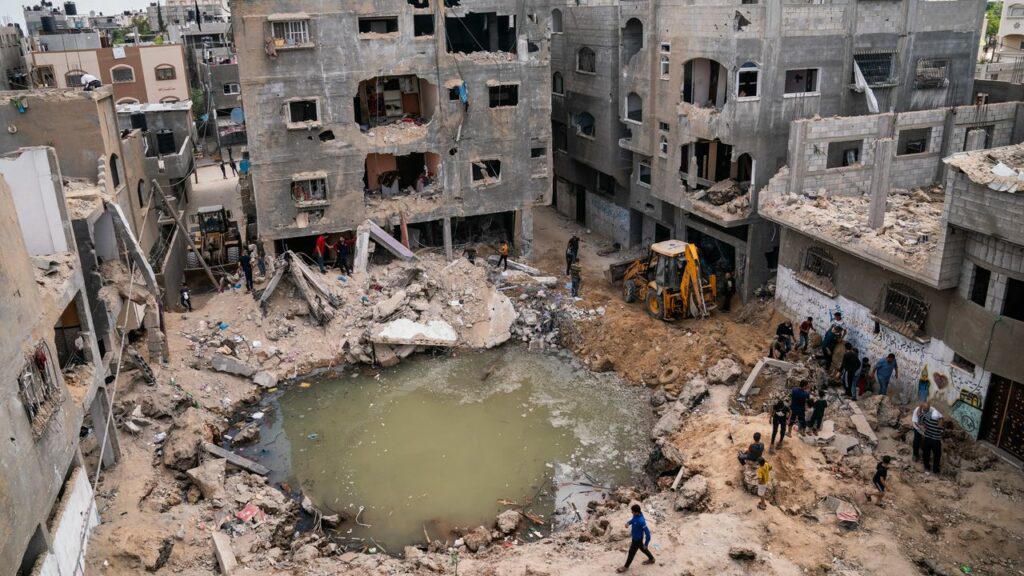 A crater full of water and sewage remains where the home of Ramez al-Masri was destroyed by an air-strike prior to the cease-fire, Sunday, May 23, 2021, in Beit Hanoun, the northern Gaza Strip. (AP Photo/John Minchillo)

More than 100,000 people had been internally displaced, and about 10 times that number—half the population of the tiny Gaza Strip—had little access to piped water because of the destruction of three major desalination plants, as well as power lines and sewage works.

At least 248 Palestinians were killed, including 66 children and 39 women, and 1,948 others injured in Israeli attacks on Gaza, according to the Palestinian Health Ministry. Health authorities in the West Bank separately confirmed 31 killed in that region, totalling 279 across all Palestinian territories, compared to 12 deaths in Israel.

Citing witnesses, Palestinian news agency WAFA said Israeli police had earlier on Sunday assaulted Palestinians who were performing dawn prayers at the mosque and “excessively beat” them in order to make way for Israeli Jewish settlers to storm the compound—Islam’s third-holiest site.

It was the violent police storming of the mosque two weeks ago, combined with moves to evict more Palestinians from their homes in the Jerusalem neighbourhood of Sheikh Jarrah, that triggered the 11-day conflict.

Israeli police also attacked and dispersed a Palestinian protest against the potential evictions on Saturday evening in Sheikh Jarrah.

On Sunday, Israeli Prime Minister Benjamin Netanyahu’s government stepped up its incitement of these racist layers, on which the caretaker coalition regime depends for its political survival.

Finance Minister Yisrael Katz threatened to assassinate leaders of Hamas, which governs Gaza, over any rocket fire from the Gaza Strip. Speaking to the Reshet Bet local radio station, Katz said any rocket fire into southern Israel would be avenged by killing Hamas leaders, stressing that this policy was agreed by the Israeli security cabinet before approving the ceasefire on Friday.

Netanyahu declared: “If Hamas thinks we will tolerate a drizzle of rockets, it is wrong.” Vowing to respond with “a new level of force,” he boasted that Israel had done “daring and new things” during the conflict “without being dragged into unnecessary adventures.”

Netanyahu also claimed to have sought to minimise civilian casualties in Gaza, but that lie was exposed on Al-Wahda Street, where Israeli bombing caused three buildings to collapse in the middle of the night on May 16, killing more than 40 Palestinians. Among the dead was Dr. Ayman Abu Al-Aouf, head of internal medicine at Gaza City’s Al-Shifa Hospital. He was responsible for the hospital’s COVID-19 ward.

Israel said the aim of its attack on al-Wehda was to destroy a network of tunnels it called the “Metro.” The military denied it had intended to make the buildings collapse.

Even before the latest major Israel assault, the Gaza Strip’s two million inhabitants already lived inside what they call the “world’s largest prison,” with more than 50 percent unemployment, an overwhelmed heathcare system, sometimes poisonous water and endless power cuts.

The Zionist regime in Israel and the military dictatorship in Egypt have for 14 years enforced a blockade on Gaza, supposedly to restrict the flow of weapons and munitions to Hamas. The two countries restrict who and what can enter the enclave, and control much of its energy supply, while Israel controls its airspace, maritime fishing rights, birth registry and cellular data.

More than 525 businesses were damaged or destroyed in the fighting, the Geneva-based Euro-Mediterranean Human Rights Monitor estimated. The toll included at least 50 factories, along with hundreds of small businesses, destroying the livelihoods of thousands of workers and proprietors.

The UN relief agency for Palestinian refugees, UNRWA, launched a 30-day flash appeal for $US38 million to cover the most urgent needs of Gazans, as well as those living on the West Bank, who have suffered violent attacks. UNRWA Commissioner-General Philippe Lazzarini said the funds would be used to house up to 50,000 people on the West Bank, including East Jerusalem, who are now residing in some 50 designated emergency shelters.

Protests in Israel indicated revulsion and opposition within the country to the military offensive and the eruption of far-right violence against Israeli Palestinians. A pro-peace rally and march in central Tel Aviv on Saturday drew several thousand participants, calling for Jewish-Arab partnership and an end to the occupation of the West Bank, which Israel seized in 1967. Similar demonstrations had occurred in various parts of Israel during the previous week.

On Saturday, hundreds of people had gathered outside the prime minister’s residence in Jerusalem, calling on Netanyahu to resign, accusing him of deliberately extending the conflict for personal and political gain. About 200 people also marched through the mixed city of Jaffa, voicing support for coexistence between Arabs and Jews.

Netanyahu has used the military operation to cling to office, despite facing an array of corruption charges. A mandate given to Yesh Atid chairman Yair Lapid to form a new government after four inconclusive elections in two years expires next week and seems unlikely to succeed after Naftali Bennett of the Yamina (New Right) party said such a move was now “off the table.”

US Secretary of State Antony Blinken reiterated the Biden administration’s backing for Israel on ABC News on Sunday. He insisted that any aid to Gaza would not flow through the Hamas government and he defended the administration’s latest $735 million package of weapons to Israel, which will continue to supply the Zionist state with the missiles it uses against the Palestinians.

As last week’s World Socialist Web Site statement explained, the military assault on Gaza and the growing revolt within Israel itself pose with utmost urgency the struggle to unite the working class, Arab and Jewish, across all national and sectarian divides, in a common struggle for a Socialist Federation of the Middle East as part of the fight to put an end to capitalism all over the world.