Palestine: This Time, the International Criminal Court Is Watching

Despite attacks against the ICC, the court is proceeding with its investigation of war crimes in Palestine. 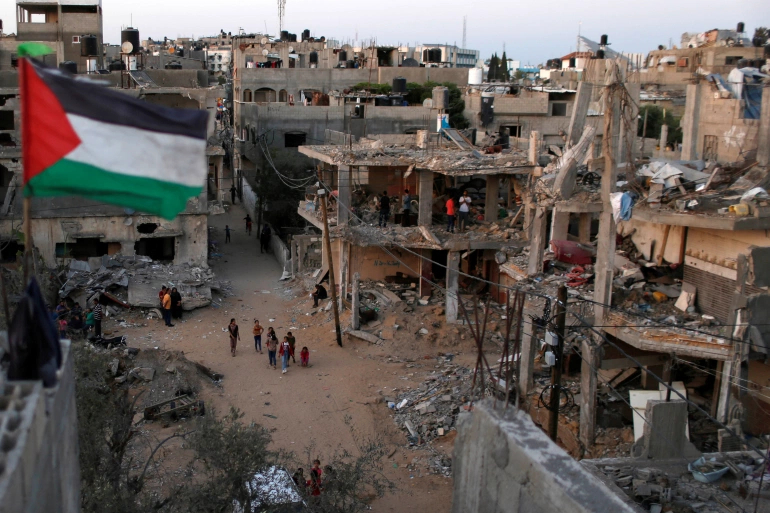 A Palestinian flag flies next to the ruins of houses destroyed by Israeli air strikes during the recent Israeli assault on Gaza on May 25, 2021. [Reuters/Mohammed Salem]

Israel launching forced evictions, raids of Al Aqsa Mosque, and persecution of Palestinians. Hamas firing rockets into Israel. Israel bombing densely populated areas of Gaza, claiming that Hamas uses civilians as “human shields”. Palestinians saying that they have nowhere to hide from the air raids. Populated towers bombed by Israeli forces into rubble. Mothers mourning the loss of their children.

The brazen violence is outrageous. The latest round of this deeply asymmetric conflict has cost at least 254 Palestinians lives (including 66 children) and 12 people in Israel (including two children). Once more, senior UN officials have declared that the Israeli bombing of Gaza, if found to be disproportionate, would constitute war crimes.

The situation is on a “doom loop” from which there appears to be no escape. This time, however, is different. This time, the International Criminal Court (ICC) is watching.

The ICC currently has a live investigation into the situation in Palestine. While some insist that the ICC cannot investigate Palestine because it is not a state, this is not a view shared by the court or the majority of its members. It was also made moot when ICC judges gave the green light for an official probe into alleged atrocities committed in Palestine earlier this year.

It is not yet clear which acts or actors might be targeted by the ICC. But all signs point to Hamas leaders and Israeli government officials facing scrutiny. Hamas is accused of war crimes, including for intentionally firing rockets at civilian areas in Israel. The Israeli government is accused of war crimes for its repeated and disproportionate bombing of Gaza as well as establishing and expanding Israeli settlements in the occupied West Bank.

Israel has rejected any ICC investigation, claiming that the court – an institution that came into existence in 2002 to investigate and prosecute mass atrocities – is illegitimate and emboldens “terrorist groups”. Israel loudly supported and coordinated an anti-ICC misinformation campaign with the administration of US President Donald Trump, even endorsing sanctions against senior ICC staff. Right-wing Israeli Prime Minister Benjamin Netanyahu went so far as to insist that the court represented “pure anti-Semitism” for investigating war crimes in Palestine and to woo right-wing governments – including those that hold openly anti-Semitic positions – into criticising the court.

This hysterical opprobrium comes despite the fact that some experts believe that the ICC is more likely to first start looking into accusations against Hamas because Israel would gladly cooperate with such an investigation and give investigators access to the occupied Palestinian territories. The Israeli government, however, has made it clear it will not cooperate with an ICC probe into its own crimes and that the Israeli courts would not prosecute alleged Israeli war criminals either.

In the eyes of many, the Israeli government’s radical, anti-ICC rhetoric makes the state look more responsible for the atrocities that the court is investigating. So too does Netanyahu telling Israeli soldiers not to “be afraid” of “commissions of inquiry, investigations, [and] inspections” over war crimes. In the midst of a military conflict, Netanyahu effectively told soldiers that the Geneva Conventions were not their concern.

Still, Israel – and Hamas – are undeterred. As the recent violence has shown, neither appears interested in mitigating their behaviours just because the ICC is watching. This is unsurprising. A litany of UN reports, independent investigations, and commissions of inquiry have claimed that Hamas has committed war crimes and Israel – war crimes and crimes against humanity, while recommending that they be investigated by the ICC. Israel has dismissed each and every one, with state officials viciously attacking their authors.

Some might therefore conclude that the ICC is an irrelevant player right now. Far from it.

With the world watching as apparent war crimes were livestreamed on social media, the ICC’s chief Prosecutor Fatou Bensouda stated that she is looking at ongoing violence “very seriously”, adding that “[w]e are monitoring very closely and I remind that an investigation has opened and the evolution of these events could also be something we look at”.

Bensouda will be replaced at the ICC this summer by British barrister Karim Khan. The atrocities of this week will make it effectively impossible for him not to proceed with the ICC investigation. It would be too humiliating for the institution to pull its punches in the wake of such callous disregard for international humanitarian law.

Likewise, the eviction of civilians from Sheikh Jarrah in Jerusalem and Israel’s mass bombardment of civilian homes and infrastructure in response to Hamas’ rockets will only convince more people that the court must intervene and hold perpetrators to account.

The situation will push more people to consume and convince themselves that respected human rights institutions like B’Tselem and Human Rights Watch are correct in finding that Israel’s treatment of Palestinians amounts to persecution and apartheid. Current events are taking the edge of controversy off of the term apartheid, as applied to Israel’s treatment of Palestinians. Mainstream journalists and political figures are even using the term to describe the plight of Palestine.

People will thus be more convinced that the ICC should intervene. It is becoming only clearer that the status quo for Palestinians and Israelis is driven by impunity for atrocities, persecution, and the oppressive conditions that Palestinians find themselves in the occupied West Bank, Gaza, and Israel.

The ICC cannot bring peace to Israel-Palestine. It cannot end apartheid. It is not the solution. But it should be part of it. Every hour that passes offers only more evidence that the ICC should continue its investigation and, ultimately, issue warrants for those responsible for international crimes in Palestine.

The court is watching. Perpetrators ignore this fact at their peril.

Mark Kersten is a Fellow at the Munk School of Global Affairs, University of Toronto and the author of the blog, Justice in Conflict.